After a tough floor fight and fancy parliamentary footwork, the state Senate passed a bill phasing out Atlantic salmon net-pen farming in Washington. 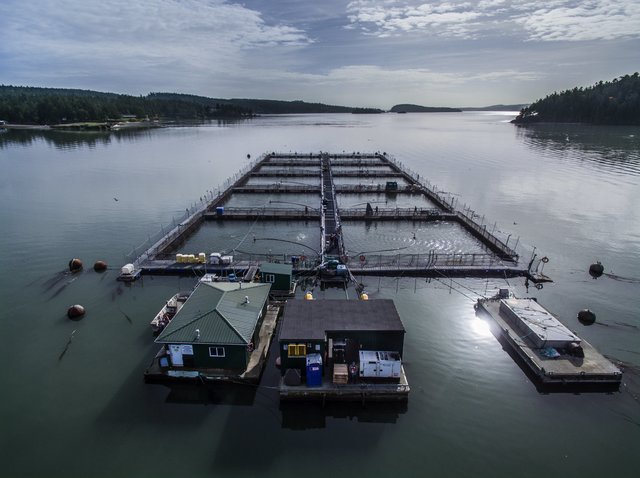 Atlantic salmon net-pen farming will be phased out in Washington by 2025 under legislation passed by the state Senate on Friday after a tough floor fight and fancy parliamentary footwork.

With at least six lobbyists in a last-minute campaign, Cooke Aquaculture Pacific worked hard until the last vote Friday to keep its Atlantic salmon net-pen industry alive in Washington.

But in the end the bill, which was buried under a blizzard of amendments, each one defeated, passed on a vote of 31-16.

Lawmakers steamrollered through amendments by opponents of the bill to avoid sending it back for further review in the House.

With the 5 p.m. cutoff for passage of bills from the opposite chamber looming, senators had filed some 30 amendments. Using a parliamentary move, backers of the measure were able to continue debate past the cutoff to pass the bill at 6:30 p.m.

But opponents continued debate on most of the amendments anyway, from requiring all-female fish at Atlantic net-pen farms, to giving operators a state tax break and lease-fee reduction to pay for converting to farming only native fish.

Like other opponents of the bill, Sen. Mark Schoesler, R-Ritzville, minority leader of the Senate, said he opposed it because “I don’t think we should ban any job creator in this state. If we need to make improvements to regulation for the environment, that is reasonable. But an out-and-out ban is not.”

Backers said Cooke created its own problems by negligence and the industry was too risky for Puget Sound and its native fish.

Joel Richardson, Cooke’s vice president for public relations, said the company would consider “all our available options” regarding its operations, which employ more than 600 people.

“We know that we have work to do with our state, tribal and community partners to rebuild public confidence and demonstrate the value that our industry brings to Washington and the world,” said Richardson.

Cooke has poured money into a lobbying campaign against the bill, signing up at least six lobbyists retained at a total of $72,000, according to registration forms Cooke filed with the state Public Disclosure Commission.

The most recent registration was added this week, signing on three more lobbyists. They include Steve Gano, one of the most experienced and powerful in Olympia, on Feb. 26 for a $30,000 flat fee to work through the legislative session and on any executive action by Gov. Jay Inslee. The governor has said he would sign a net-pen phaseout bill.

The debate at times was bitter. “There are a lot of people making money today; out in the hall, we are not supposed to talk about that,” said Sen. Judy Warnick, R-Moses Lake, referring to lobbyists. “But the people not making money are the employees of Cooke Aquaculture.” She and other opponents of the bill said the state should not put people out of work.

Cooke is one of the largest farmers of Atlantic salmon in the world with $2.5 billion in revenue last year, operations in six countries and 6,000 employees. Its operations in Washington, where it hopes to remain and expand, include net-pen operations in four locations around Puget Sound and an $8.5 million payroll in the state.

The legislation to phase out Atlantic salmon net-pen farming was the result of an escape last August from Cooke Aquaculture Pacific’s Atlantic salmon farm at Cypress Island, where as many as 263,000 fish were released into the Salish Sea. The incident ignited controversy over the industry.

Cooke initially told the public and its regulators the incident was just a small release of fish, and primarily a business loss for the company, caused by unusually high tides coincident with the solar eclipse the same week. Three state agencies in a four-month investigation found the escape actually was due solely to Cooke’s negligence, and that the company had misled the public about the size and cause of the escape.

Cooke’s Washington operations are already facing reduction by administrative action. Commissioner of Public Lands Hilary Franz has terminated two of the company’s leases, at Port Angeles and Cypress Island because of violations by Cooke. The company is fighting the Port Angeles termination in court.

While always controversial, the question of whether to retain Atlantic salmon farming in Washington has taken on a new urgency as Puget Sound and its federally listed species — including native Pacific salmon — struggle for survival. Many fear the state’s identity as a place of wild salmon is slipping away.

“I thought it would be difficult, a pretty heavy lift,” Sen. Kevin Ranker, D-Orcas, said of the bill. “It is never easy to take on a global corporation like this.” He said the bill was a chief focus for him coming into the legislative session.

“We have done the right thing,” Ranker said. “We have supported our culture and our natural resources.”

The Washington Fish Growers Association launched a letter campaign this week with aquaculture consultants and retired scientists writing to legislators, declaring the industry does not harm Pacific salmon. The state Department of Fish and Wildlife regards the risk of the industry as low — but not risk-free.

Joel Richardson, vice president for public relations at Cooke, has told lawmakers the company, based in New Brunswick, Canada, will sue the state under the North American Free Trade Agreement to recover its $76 million investment in Washington should the bill pass.

The company bought its net-pen operation here in 2016 from Icicle Pacific.