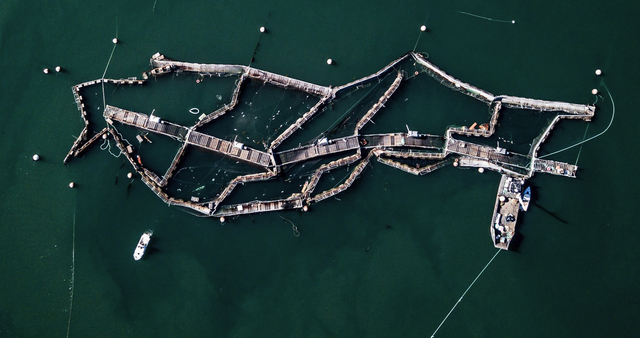 A Washington state investigation of the catastrophic net-pen collapse in August at Cooke Aquaculture’s Cypress Island fish farm finds the company at fault for a disaster that freed more than twice as many Atlantic salmon into the Salish Sea as the company has reported.

Cooke Aquaculture Pacific vastly underrepresented the scope of a catastrophic Atlantic salmon net-pen spill at its Cypress Island farm in August and misled the public and regulators about the cause, according to a new report by state investigators that blames the pen collapse on company negligence.

The investigation found that Cooke lowballed the number of escaped fish by more than half, and did not do essential maintenance at its farm, causing the escape.

The company also misled agencies about the seriousness and cause of an earlier mishap at the farm in July; as a result, state agencies did not investigate Cooke’s operations sooner, investigators found.

“The collapse was not the result of natural causes,” said Hilary Franz, state commissioner of public lands. “Cooke’s disregard caused this disaster and recklessly put our state’s aquatic ecosystem at risk.”

The report, released Tuesday by the state departments of Ecology, Fish and Wildlife and Natural Resources, is the result of a review begun in September by an investigative panel of experts from the agencies probing the breakup of one of three net-pen farms Cooke Aquaculture operates near Cypress Island in August, and an earlier incident at the same farm in July.

Ecology also fined Cooke $332,000 on Tuesday for violating its water-quality permit before and during the net-pen collapse.

Cooke initially blamed the net-pen collapse on strong tides coincident with the solar eclipse — an explanation from which it later backed off.

The state investigation tells a different story. It departs sharply from what Cooke reported to state agencies in significant aspects — from the seriousness and cause of the initial trouble at the farm in July, to the number of fish released to Puget Sound.

“This is far more than … we thought had escaped, based on Cooke’s false reporting,” Franz said. “We all know how to count fish, Dr. Seuss made it easy: One Fish, Two Fish,” Franz said, recalling the author’s children’s book.

Cooke Aquaculture on Tuesday disputed the agencies’ findings, particularly the fish count, which the company said was based on flawed estimates of the average weight of the recovered fish.
Sign up for the Morning Brief

The company acknowledged it had fallen behind in net cleaning, but it said the report overstated the extent of the fouling on the nets, and the forces of drag created as a result.

Joel Richardson, vice president for public relations for Cooke, said the company was “shut out of this investigation by the state agencies” and could not meaningfully participate in the review.

Agency directors pushed back hard at Cooke’s criticism, stating the company itself failed to provide information requested by investigators, missed deadlines in the review process and misled both the state and the public.

“Our investigative team doggedly pursued the truth,” said Maia Bellon, director of the Washington Department of Ecology. “Cooke Aquaculture was negligent, and Cooke’s negligence led to the net-pen failure. What’s even worse was Cooke knew they had a problem and did not deal with the issue. They could have and should have prevented this.”

Other key findings from the investigation:

• Cooke did not adequately clean the nets on the pens containing 305,000 Atlantic salmon — nearly 3 million pounds — and allowed excessive buildup of mussels and other sea life on the nets. The nets were carrying up to 110 tons of biofouling.

Most crucial was the clogging of the net by heavy growth of mussels and other sea life. That increased the lateral force of drag on the nets in the current, causing the pen — already heavily corroded and past its useful life — to collapse.

• Breakdown of two of three machines used to clean the nets caused Cooke to fall critically behind in net maintenance.

• Cooke knew excessive fouling of the nets caused a serious failure of the mooring system at the same farm in July. Yet it told regulators two days after the incident that high tidal currents had caused “some movement” of the net pen, but that everything was back under control.

Internally, however, Cooke said it “almost lost the farm.” Managers discussed replacing the nets after that event, but they elected not to.

• Tidal currents were within normal ranges during both the July and August incidents, and a properly designed, sited and maintained net pen should have been able to withstand the forces at the site, as it had for 16 years at or near the same location under previous owners. However, Cooke’s farm was inadequately maintained and hampered after the July incident by a makeshift repair that had not been approved by an engineer, the agencies found.

• At the time of the incident the company and state lacked an adequate fish-recovery plan for escapes of Atlantic salmon from net pens, investigators found. The response to the emergency by both Cooke and the state was slow and inadequate, allowing fish to infiltrate rivers throughout the region.

Atlantic salmon are still in some area rivers, including the Skagit, and only long-term monitoring will determine whether the fish are reproducing or causing other effects, investigators said. Concerns include escaped fish competing for food and habitat with wild fish; continued escapes from net pens eventually allowing Atlantics to establish themselves in Pacific salmon habitat; pollution and spread of disease from the pens.

Windrope said the risk to native Pacific salmon from the Atlantics that escaped is low. But it is real.

“Our native salmon are not doing well. It is a death by 1,000 cuts. And this is another cut,” Windrope said.

“There is risk here … the fish within the Upper Skagit demonstrate that.”

Legendary angler Bill McMillan said sport fishers have caught at least 200 Atlantics in the Skagit between December 16 and January 3, as far as 67 miles upriver. By contrast, only two native steelhead were reported caught in the Skagit.

Since the August net-pen collapse at Cypress Island, Franz, the public-lands commissioner, has ordered inspections at all of Cooke’s facilities around Puget Sound. Those are ongoing.

Cooke lost its lease to operate its Port Angeles Atlantic salmon farm last December after an inspection revealed the farm was not adequately maintained and was outside its leasehold boundaries.

The company is fighting the Port Angeles lease termination in court.

Cooke could soon face termination of its Cypress Island lease as well if the Department of Natural Resources finds it did not maintain its farm there in a clean and safe condition, as required by its lease. The company has three net pens at Cypress Island; two of those are still operating.

“In the coming days, I will make an announcement regarding the future of Cooke’s Cypress Island facility,” Franz said.

Cooke also faces opposition from treaty tribes. Chairmen from 21 tribes, in an unusual show of solidarity, signed a letter to every legislator Jan. 18 asking lawmakers to shut down Atlantic salmon net-pen farming in Puget Sound as soon as possible to protect native fish and Puget Sound, home to multiple threatened and endangered species.

Recreational and commercial fishermen and conservation groups from around the region have also written lawmakers and testified in opposition to continued Atlantic salmon net-pen farming in Puget Sound.

The report comes as lawmakers are considering legislation to end Atlantic salmon net-pen farming in Puget Sound immediately upon signature of the governor, or phase it out as Cooke’s leases expire. The last lease terminates in 2025.

State Sen. Kevin Ranker, D-Orcas Island, co-sponsor of the phaseout bill, said Cooke has disrespected and violated the public trust. “It is absolutely shocking that a corporation working in Washington would be this negligent and be so very untruthful about it,” Ranker said. “This is not the kind of business we want operating in the state of Washington.”