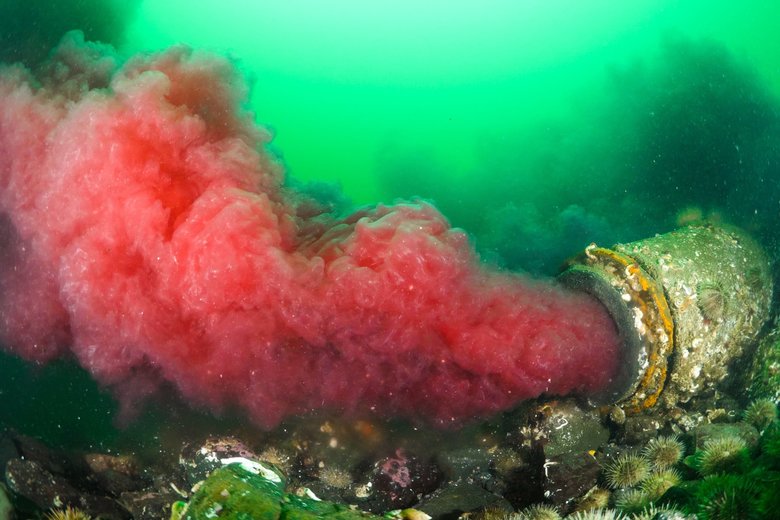 SEATTLE – An audit of British Columbia fish-processing plants sparked by gory video of a pipe spewing bloody water into the Salish Sea has found that more than 70 percent of plants audited are out of compliance with environmental regulations, and some operate under rules decades behind modern standards.
Stronger measures are needed for the fish-processing industry, to ensure protection of the marine environment, including wild salmon, according to the audit of 30 fish-processing plants released Wednesday by the B.C. Ministry of Environment and Climate Change Strategy in response to controversy that erupted over the plume.

“This audit clearly tells us more work needs to be done to ensure our coastal waterways are safe for all wild fish stocks,” George Heyman, minister of Environment and Climate Change Strategy, said in prepared remarks announcing the findings.

“The industry has been largely operating under an outdated permitting regime, going back several decades. We are taking immediate steps to ensure permits are updated and strengthened at fish processing facilities throughout B.C.”

The most serious infractions revealed in the audit include plants that exceed the volume and quality of fish-processing effluent discharged to open water allowed under the permits. The effluent-discharge quality and toxicity results detected in the audit indicate that typical undiluted fish-processing effluent passed through current treatment works is “frequently acutely lethal to fish,” according to the audit.

The effluent was not tested for pathogens.

Most of the noncompliance findings were administrative, such as not completing paperwork as required or posting proper signage.
Shawn Hall, spokesmen for the B.C. Salmon Farmers Association, agreed new standards are needed.

“The current wastewater permitting system is outdated,” Hall said. “We are happy the government is on a path to address that, bringing permits into best practices. Updating is going to enable us to evolve, and operate in an environmentally responsible manner.”

Some processors already were working to upgrade their plants, Hall said.
Meanwhile, a videographer on June 26 filmed the bloody plume still spewing from the same plant that first made news on Canadian national television last December. The videographer, Tavish Campbell, spokesman for Wild First, is an opponent of open-net-pen salmon farms and contends the effluent is harmful to wild salmon.

A statement on the website for Brown’s Bay packing declares the plant’s waste is disinfected and causes no harm. The plant is at Campbell River on the east side of Vancouver Island.

Washington is home to a much smaller farmed-salmon industry, and farmed salmon are processed at just one plant, in Seattle, which is hooked up to the municipal sewage system.

The owner of Washington’s farms, Cooke Aquaculture, recently was blocked by the state Department of Fish and Wildlife from planting more of its fish out in grow pens near Bainbridge Island because the fish at its hatchery were found to have been tainted with an exotic virus.

Ken Warheit, director of fish health for Fish and Wildlife, said the department intends to test waters outside of Cooke’s hatchery in Rochester, Thurston County, to ensure the virus, detected in May, has not gotten into water outside the hatchery.

The department also intends to test adult salmon at Cooke’s facilities for the virus as part of a biosecurity review of all aquaculture facilities in Washington.

The department is also updating state aquaculture records and rules, and working through a protocol for a revised testing program to ensure more regular biosecurity testing at all aquaculture facilities, Warheit said.
The Washington State Legislature last session enacted a phase out of open-water net-pen farming in state waters by 2025. That was in response to a large escape from Cooke’s pens at Cypress Island that state regulatory agencies determined was caused by Cooke’s negligence.

The issue of salmon farming in the Salish Sea has been in turmoil on both sides of the U.S.- Canada border since the escape. Some First Nations in Canada have protested the presence of net pens in their territorial waters.
Ernest Alfred, a traditional Namgis chief, occupied a net pen at Swanson Island for nearly 280 days beginning in August, until removed by court order in May sought by Marine Harvest, which operates 12 fish farms in the Broughton Archipelago.

The B.C. government announced June 20 that fish farms in B.C. waters are on a month-to-month lease, until 2022, when all fish farms must receive consent from First Nations to operate.

Farmers must also demonstrate their operations do not harm wild salmon.
“We need to take the necessary steps – steps that should have been taken years ago – to ensure that fish farm operations do not put wild salmon stocks in jeopardy,” said Doug Donaldson, minister of Forests, Lands, Natural Resource Operations and Rural Development in a prepared statement.
The $1.5 billion salmon-farming industry in B.C. supports more than 6,000 direct and indirect jobs and supplies more than 70?percent of the salmon harvested in B.C., Hall said. Some farms operate with the consent and support of First Nations, while others in the Broughton Archipelago on the northeast side of Vancouver Island have been bitterly contested.

Alfred said the decision from B.C. was a disappointment because it did not require an immediate shut down of open-water net-pen farms in the territorial waters of his people. He made his stand for wild salmon, saying the pens spread disease and pollution. “We wanted to send them packing.”

The policy shift eventually requiring indigenous peoples’ consent to operate all fish farms took farmers by surprise, Hall said, and the industry is still reviewing it.