For the Sake of the Snake 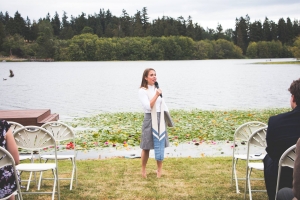 “There is a river whose streams make glad the city of God.”

Columbia, Clark Fork, Elwha, Spokane—rivers gladden the cities and communities of the Northwest. Right now, one local river needs our help to make it “glad” again. Cathy McMorris-Rodgers is pushing harmful legislation regarding the Snake River. Her bill, H.R 3144, would forbid new analyses and public input on Snake River salmon restoration, halt even the study of dam removal, and roll back current protections for salmon. This bill passed in the House of Representatives on April 25, but there is still time to prevent it becoming law. HR 3144 is regressive and damaging. I ask all people of faith and good will to join me in fighting against Cathy McMorris-Rodgers and her backwards bill, H.R. 3144.

As a lifelong Lutheran, I’ve sung or prayed that line about glad rivers from Psalm 46—a favorite of Martin Luther’s—many times. I serve as the pastor of Salem Lutheran Church in the West Central neighborhood, just blocks from the Spokane River. On Mondays, I walk the neighborhood in prayer with a friend. Sometimes we end up along the banks of the Spokane, pausing near the falls to let the mist sprays our faces. We are standing in holy water.

From the rivers in Genesis that flow out of Eden, to the Nile which carried Moses, to the Jordan that cleansed Naaman and baptized Jesus, all the way to the end of Revelation where the promised river of life flows “bright as crystal,” rivers run through the whole biblical story of salvation. For people of the Christian faith, water matters. Rivers matter.

For people of faith in the Inland northwest, the salmon matter, too. Salmon are already in steep decline and threatened with extinction on the Snake and Columbia rivers. This should trouble Christians: extinction is lousy stewardship. Yet we also know from examples like the renewed Elwha River that life can thrive when rivers are rightly managed: for people, for salmon, for the glory of their Creator. How can we sing Psalm 46 while many of our rivers groan under the weight of misuse?

Some argue that helping return salmon to the Snake River preferences one group over another. We hear stories of enmity: farmers vs. tribal leaders, environmentalists vs. sportsmen. Recent opinion pieces in regional newspapers have highlighted Governors Inslee and Brown’s opposition to McMorris-Rodger’s bill. On the local level, however, a diverse community of people has already begun working together for a healthy, thriving, free-flowing Snake River, useful to humans and full of salmon. H.R. 3144 would splinter that unifying work.

Martin Luther was no environmentalist. Yet, by faith, and perhaps by praying Psalm 46, he knew that rivers matter. In a blessing for a newly baptized child, Luther prays to God: “through the Baptism in the Jordan of your beloved Son, our Lord Jesus Christ, you sanctified and instituted all waters to be a blessed flood, and a lavish washing away of sin.” God has blessed this region with beautiful, life-giving rivers. They bear the presence of Jesus to us. My first Christmas as a pastor here in Spokane, a church member greeted me by saying, “There’s fresh steelhead for you in the refrigerator, Pastor. Caught it last week on the Snake. Filleted and de-boned. Merry Christmas.”

The gifts of the Creator are meant for all of us to enjoy. For that to be true, we need to act. Join me in standing up for our planet’s health, especially for the sacred waters, creatures and people of the Snake River.