This past Sunday saw the first Loaves and Fishes gathering at Salem Lutheran Church in Spokane. The event consisted of lunch and conversation on treaty rights, salmon recovery, and reconciliation. Initial fears about a shortage of food were met with the generous gifts of church members and speakers leaving us with an overflowing bounty of local grains, pacific salmon, and an assortment of hearty side dishes. No one left hungry. 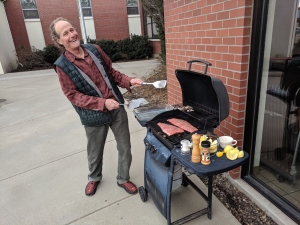 The speaking portion of the afternoon featured David Brown Eagle, Liv Larson Andrews, Sam Mace, Elliott Moffett, John Sirois, Ron Richards, and Bryan Jones. David welcomed us all to the land of his ancestors with a moving story about our ties to family and to our homeland. He implored everyone to consider the way that we treat our mothers, to compare that to the way we treat the Earth. Liv followed, welcoming everyone to the church and sharing a bit of her water focused theology. While Martin Luther was no environmentalist, his interpretation of the baptism of Jesus as a blessed flood radiating through all the waters of the Earth and covering everything through the cycle of rain and run-off informs Liv’s understanding of the need to protect our watersheds and all of the people who the waters connect. 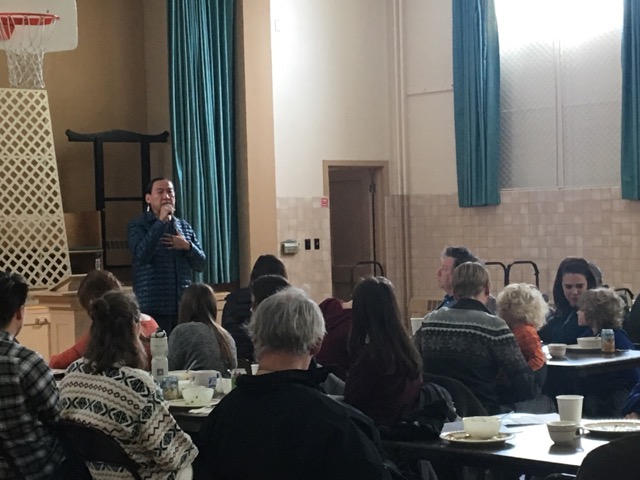 Having established the deep, yet conversational tone of our afternoon, Sam Mace took to the podium to educate those gathered about the history of salmon decline, the dismal fish returns of 2017, and the hope we have both in the courtroom and in our communities as Lower Snake River dam removal is gaining force as a necessary and feasible alternative to extinction. Next up was Elliott with Nimiipuu Protecting the Environment, speaking to his own history with salmon and his hope for the future. Elliott’s experience in tribal activism with the mega-load issue on the reservation and forestry reform for stream protection, as well as the building movement of inter-tribal activists that learned their power at Standing Rock gives him hope for restoring the Snake River.

Shifting the focus Northward to the land where we were gathered, John Sirois from Upper Columbia United Tribes shared their work to have a voice at the negotiating table of the renewed Columbia River Treaty. The tribes seek to have health of the river considered equally with the benefits of hydropower and flood control in the new treaty. A very practiced and compelling speaker, John made reference to the long history among indigenous peoples of using “applied science” to know when and where to find food and the continuation of that tradition today as tribal biologists are the leading scientists working toward habitat restoration.

Finally we turned to the namesake duo of the event, our farmer and fisherman. Ron Richards, a commercial fisherman from Port Angeles, WA distilled the feeling of many in attendance when he said that it’s hard to take the stage after an indigenous speaker, but he rose to the challenge mightily. Ron told a moving story about the dedication ceremony of Ice Harbor Dam, the first of the four Lower Snake River Dams. On that day he watched as a large Chinook swam cluelessly against the giant wall of concrete that now blocked her way home, and swore that the fish made eye contact with him, as if pleading for help. Following Ron, and rounding out the lengthy set of speakers was wheat farmer Bryan Jones, who spoke passionately about the need to restore wild salmon and the availability of other options than barging to ship grain.  While Bryan does not speak for every farmer in Whitman County, his passion for restoring the Snake River impressed upon all in attendance. The friendship and the feelings on display with Ron and Bryan break down the narrative that we are taught to believe, that farmers and fisherman have two mutually exclusive sets of purely economic interests. Farmers and fisherman, like all of us, have a deeply held set of shared values based on our love of the places we live and the creatures that we are blessed to share them with.

We are grateful to Salem Lutheran Church for letting us use their building for the afternoon, to the Spokane Tribe for the use of their homeland, and the salmon for giving its body for us to eat.

With the first Loaves and Fishes event under our belts, we now move confidently toward the future events in Moscow (April 10) and Walla Walla (April 12).  Please feel free to join us for these events if you are able.