'It Takes Our Purpose': With No Salmon, Yurok Tribe Struggles With Identity 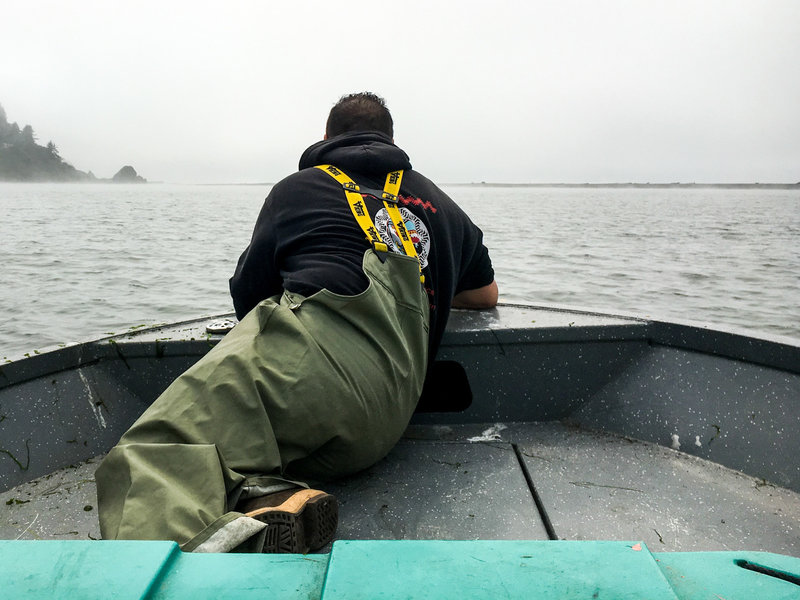 The Yurok tribe has fished for salmon in the Klamath River for centuries. Salmon is essential to Yurok ceremonies, for food, and for income. But this fall, the number of Chinook swimming up the Klamath, in the Pacific Northwest, was the lowest on record, threatening the tribe's entire culture and way of life.

Erika Chavez and Jerome Nick Jr., cousins who work for the Yurok Tribal Fisheries Department, are patrolling the Klamath River in the far northwest corner of California. Nick perches in the front of the boat, with Chavez at the helm as they head to the mouth of the river. "Just checking to see if there's any tribal members fishing," Chavez says. "Then we're gonna head up to the bridge to see if anyone's there."

Today, the cousins are also are volunteering to catch salmon for tribal elders — the only fishing allowed this year.

Chavez slows the boat so Nick can pull up a net they set a couple hours ago. The verdict?

The cousins are alone on the water today. In a normal year during commercial fishing season, Nick says, "practically this whole area is nets, all the way up to the bridge. You just see corks on the water, the river's so packed with nets."

Without people on the river fishing, the salmon have a chance to travel up river to spawn. "At least that's my hope," Chavez says.

Unlike a lot of Yurok, Nick didn't grow up fishing. He moved here six years ago to get away from family drama in Oregon. Now, when he's not working the overnight shift at WalMart, he's on the water. "I work here with my cousin and she keeps me sane," he says. "She's my rock."

Chavez grew up with her family camping right here for the summer. Her grandma would make fry bread, and she and her great-grandma would watch everyone fish. Chavez started fishing when she was nine. "My partner was my auntie, she's the one that taught me, and our whole bottom of our boat was filled with fish. Everyone was catching plenty for their families. It was beautiful."

For the Yurok, a rich salmon harvest means covering the basics. "It feeds our family," Chavez says. "When commercial's here we use that money to buy our kids school clothes."

Chavez usually fishes for her grandma. "I get her 10 to 15 fish every year, so it's in her freezer for the whole year," she says. This year, "she'll have to deal with deer meat or elk meat or something."

About five minutes away in the town of Klamath, thousands of Yurok tribal members and friends gather every August for the tribe's Salmon Festival. There's a parade, and a stick game that looks to my untrained eye like a cross between wrestling and field hockey.

At the 55th Annual Yurok Salmon Festival, Oscar Gensaw cooks salmon the traditional way, on redwood skewers around a fire pit. This year, though, the tribe had to buy salmon from Alaska.

True to the festival's name, there's salmon cooked in the traditional Yurok way. Around the edge of a long, narrow fire pit, salmon skewered on redwood sticks form a kind of crown. Oscar Gensaw monitors the scene, wearing a T-shirt that reads: Fish Boss.

"When you first start cooking, you get those fat rings around the fish like a ring on a tree," Gensaw says. "When the fat starts dripping out of each of those rings you know that side is done."

Gensaw grew up in Klamath and has three sons and a baby daughter. "My main goal is to pass this onto my boys so one day I can be the ultimate fish boss, and be on the side when they cook," he says with a laugh. But he wants to teach them with salmon caught in the Klamath — not the fish he's cooking with today.

"These come from Alaska," he says. The tribe had to buy this salmon, for the first time in the history of the festival.

The tribe works with federal agencies every year to estimate the fall run and to decide how many salmon can be caught. So few Chinook were expected to return to spawn this year that commercial fishing was shut down to protect them. The Yurok were allowed to catch just over 600 salmon, in a tribe of 6,000.

Those low numbers are the end result of drought, disease, and a long history of habitat destruction. The Yurok place much of the blame on upstream dams that have blocked salmon from ancient spawning grounds for over a century. After years of debate and struggle, four dams are set to be removed by 2020.

In the parade, Annelia Hillman commands the megaphone for the Klamath Justice Coalition, chanting, "Undam the Klamath, bring the salmon home." She tell me that tribes along the Klamath have had to fight logging, gold mining, the dams, and now a proposed natural gas pipeline. "If we're putting our water at risk like that, we're putting life on earth at risk," she says.

Hillman's a youth social worker, and she says, when the balance with the river is off, the Yurok feel the effects. "When we can't be in our river, can't eat our fish, it kind of takes our purpose away. We have one of the highest suicide rates ... and I think that's directly correlated to our lack of salmon and our inability to continue our way of life," Hillman says.

The Yurok have fought for years to maintain their ties to the Klamath River and its salmon. In the 1960s, game wardens arrested many Yurok time and again for gillnet fishing on the river, a practice banned by the state. One young man, Raymond Mattz, challenged the arrests. His fight went to the U.S. Supreme Court, which reaffirmed the tribe's fishing rights.

Paul Mattz Van Mechelen, who runs Paul's Famous Smoked Salmon, has had to buy salmon from fishermen hundreds of miles away instead of fishing for Chinook in the Klamath River, just 50 feet from his California shop.

Van Mechelen opened the shop 16 years ago after his grandmother came to him in a dream. A steady stream of customers comes to sample and buy the wild Chinook salmon he prepares with flavors like garlic, lemon pepper and teriyaki. Usually, he gets his stock from the Klamath River.

"Not the last two years, though," he says. "I had to go to the Columbia River," hundreds of miles away in Oregon, where he buys from native fishermen. Gas, and payment for fish, are big expenses for a business owner who usually fishes about 50 feet from his store.

The losses go deeper than just finances. "I got a great niece — she's only 2 — but she helped start up the boat and and smiled and did all that last year," Van Mechelen says. "Her auntie was five when she pulled in a fish. So that whole part of learning and teaching them who they are and what this river gives to them is kind of life in one way."

When I ask him to explain that, that fishing is who Yurok are, Van Mechelen gets emotional, even stepping out of the store for a minute.

"I had my grandma at a young age tell me I had fish blood. I didn't understand it, I didn't know why. But we're all fishing people."

And when you have fish blood but you have to stay away from fishing in hopes of keeping salmon here in the future? "It's sad to stay next to a river and wake up and not see fish go by," Van Mechelen says. "That's the saddest part. It's bad enough you dream about it."

All he can do, he says, is pray the salmon come back.

This piece is part of the series California Foodways and was produced in collaboration with the Food & Environment Reporting Network, a non-profit, investigative news organization. Broadcast versions of this story aired on KQED's The California Report and NPR's Here & Now.