During the summer, this weekly report will provide an update on real-time water temperatures in the lower Snake and Columbia River reservoirs via graphs and analyses, a summary of the highest weekly water temperatures at the forebay/reservoir of each dam, and the status of adult returns for different salmon and steelhead populations as they make their way back to their natal spawning grounds. We’ll hear first-hand from scientists, Tribal members, fishing guides, advocates, and other experts about the challenges facing the Columbia and Snake Rivers - and our opportunities to improve and restore them - in order to recover healthy, resilient fish populations and the benefits they deliver to the Northwest’s culture, economy, and ecology.

These harmful hot water episodes above 68°F in the Columbia and Snake Rivers are increasing in duration, frequency, and intensity. Our changing climate is making a bad situation for the Northwest’s iconic fish worse. Our region and nation must take urgent action to maintain cool water temperatures - or we will lose these species forever. Restoring a freely flowing lower Snake River by removing its four federal dams is likely our only option to address high water temperatures in this 140-mile stretch of river running through southeast Washington State. Restoring the Snake River is one essential element of what must be a larger regional strategy to protect and rebuild healthy, abundant salmon and steelhead populations in order to benefit other fish and wildlife populations, including critically endangered Southern Resident orcas, to uphold our nation’s promises to Native American tribes, and to ensure prosperous communities across the Northwest.

The daily mean temperature at the four reservoir forebays (immediately upstream from the dam) in the lower Snake River (above) and the lower Columbia River (below) for 2022 is represented with solid lines and their 10-year average (2012 - 2022) temperatures with dashed lines of the same color. The dotted line across the graph represents the 68°F “harm threshold” for adult and juvenile fish. Salmon and steelhead begin to suffer harmful effects when water temperatures exceed 68° Fahrenheit. The longer temperatures remain above 68°F and the higher the temperatures rise above 68°F, the more severe the potential effects, including: increased metabolism, increased susceptibility to disease, reduced fecundity or reproductive potential, and/or death.

Since April, temperatures in the lower Snake River and the lower Columbia River reservoirs have steadily moved upward. During April and May, trends have tracked closely with the 10-year average. In June, however, water temperatures have dropped considerably below this average. This is good news for cold-water species like salmon and steelhead, though we expect these temperatures will rise considerably in these reservoirs as the summer progresses. This week, the reservoir behind the Little Goose Dam had the highest mean temperature of 63.68°F and the Ice Harbor Dam’s reservoir had the second highest mean temperature of 62.96°F.

On the lower Snake River this week, the reservoir behind the Little Goose Dam registered the highest temperature at 64.22°F, followed closely by the Lower Monumental reservoir with 63.32°F.

On the lower Columbia River, the reservoirs behind the Bonneville Dam registered the highest temperature at 63.14°F. 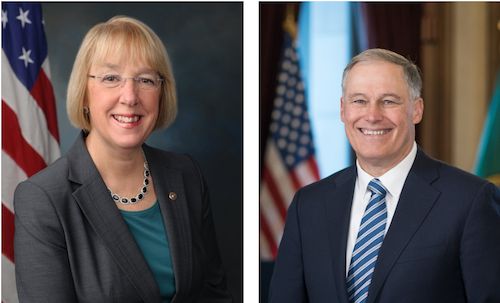 This year, the Northwest and the nation face a critical window of opportunity to decide, develop, and deliver a comprehensive regional plan to restore the lower Snake River and invest in its communities. Restoring the lower Snake River is our only realistic option for addressing its dangerously high water temperatures in the summer months. River restoration will help address other dam-caused problems created for fish by, for example, reducing predator populations, increasing current velocity, decreasing juvenile fish migration times to the estuary, and more.

July 31 deadlines loom for (i) Murray/Inslee Snake River salmon initiative and (ii) the Biden Administration’s settlement discussions: Last October, Sen. Patty Murray and Gov. Jay Inslee announced their next steps to develop an action plan to protect and restore Snake River salmon and steelhead, and invest in the region's communities. Earlier this month, Sen. Murray and Gov. Inslee released their draft “Lower Snake River Dams Benefit Replacement Report,” which confirms that the dams’ current services can be fully, feasibly, and affordably replaced. A public comment period on the Draft Report is open now through July 11. Information about the Murray/Inslee Snake River initiative and the draft ‘Lower Snake River Dams’ Benefits Replacement Report’ can be found here.

The findings from Senator Murray and Governor Inslee’s draft report lay the foundation for developing a comprehensive solution to restore the lower Snake River and its salmon, help critically endangered orcas, uphold our promises to Tribal Nations, create economic opportunities, and upgrade costly and aging energy, irrigation, and transportation infrastructure.

Below, we present background information on the benefits of restoring a freely flowing lower Snake River by removing its four federal dams:

OTHER BENEFITS OF A FREE-FLOWING SNAKE RIVER

SALMON ARE CRITICAL TO OUR ECOSYSTEM

WE CAN AFFORD SALMON RECOVERY

We can, economically speaking, afford a salmon recovery path that protects salmon and orca from extinction. This is a historic opportunity to lead the largest salmon recovery by developing and investing in new, comprehensive, science-based solutions that restore the Snake River; save salmon, steelhead, and orca from extinction; honor tribal treaty rights and uphold our promises to Northwest Tribes; creates jobs and economic opportunities; and upgrades the aging energy, irrigation, and transportation infrastructure.