During the summer, this weekly report will provide an update on real-time water temperatures in the lower Snake and Columbia River reservoirs via graphs and analyses, a summary on the highest weekly water temperatures at the forebay/reservoir of each dam, and the status of adult returns for different salmon and steelhead populations as they make their way back to their natal spawning grounds. We’ll hear first-hand from scientists, Tribal members, fishing guides, advocates, and other experts about the challenges facing the Columbia and Snake rivers - and our opportunities to improve and restore them - in order to recover healthy, resilient fish populations and the benefits they deliver to the Northwest’s culture, economy, and ecology.

Today, these harmful hot water episodes above 68°F in the Columbia and Snake Rivers are increasing in duration, frequency, and intensity. Our changing climate is making a bad situation for the Northwest’s iconic fish worse. Our region and nation must take urgent action to re-establish cool water temperatures - or we will lose these species forever. Restoring a freely flowing lower Snake River by removing its four federal dams is likely our only option to address high water temperatures in this 140-mile stretch of river running through southeast Washington State. Restoring the Snake River is one essential element of what must be a larger regional strategy to protect and rebuild healthy, abundant salmon and steelhead populations in order to benefit other fish and wildlife populations, including critically endangered Southern Resident orcas, to uphold our nation’s promises to Native American tribes, and to ensure prosperous communities across the Northwest.

On the lower Columbia River, all reservoirs peaked over the 68 degrees threshold. The reservoirs behind the John Day Dam registered the highest temperature at 72.68°F on July 31st.

Since time immemorial, the Nez Perce Tribe, also recognized as the Nimiipuu People, have been “connected to the lands and waters of modern-day Idaho, Washington, Oregon, and Montana long before the creation of the Nez Perce Reservation.”1 As a sovereign nation within the United States, the Nez Perce Tribe retains the “inherent right to fish at usual and accustomed fishing stations, and hunt, gather, and graze livestock on open and unclaimed lands, all outside of the reservation boundary.”1 However, due to “colonial encroachment, dam construction, and non-tribal fishing,” the numbers of traditional fishing sites for the Nez Perce Tribe and the number of fish have declined.2 The Nez Perce Tribe’s Department of Fisheries Resources Management is a critical program that protects and enhances fishing rights reserved by the Tribe in its treaties with the United States.3 Notably, the Department of Fisheries Resources Management successfully brought back Snake River Fall Chinook from the brink of extinction, re-established coho salmon, once extirpated from the Snake River Basin, and has become one of the largest and most successful tribal fisheries programs in the United States.3

In May 2021, the Department of Fisheries Resources Management first presented their analysis called “Snake Basin Chinook and Steelhead Quasi-Extinction Threshold Alarm and Call to Action.” The 2022 update of this analysis, to include the 2021 returns, indicates that nearly half of the wild spring Chinook populations in the Snake River Basin have crossed a critical threshold known as the Quasi-Extinction Threshold (QET), signaling they are nearing extinction, and without intervention, many may not persist. In addition, the river’s steelhead populations also face alarming threats to their continued existence.

To understand what Quasi-Extinction Threshold (QET) means, the department outlined several definitions including: QET means 50 or fewer natural-origin spawners on the spawning grounds for 4 consecutive years. QET also signifies that adult salmon abundance in a population nearing absolute extinction, and the probability of recovery is low without substantial intervention.4

During the ‘Salmon Orca Summit’ in July 2021, Dave Johnson, Manager of the Nez Perce Tribe’s Department of Fisheries Resources Management, presented this analysis and stated, “Quasi-Extinction means, aside from biological terminology, you are running out of options. When you have fewer than 50 fish on spawning grounds, the genetic diversity is really limited. Your ability to pull these fish out of inbreeding depression and other stochastic-type risks is really limited. Any type of environmental hazard can cause havoc when you have fish populations that are so low. We are certainly running out of management options.”5 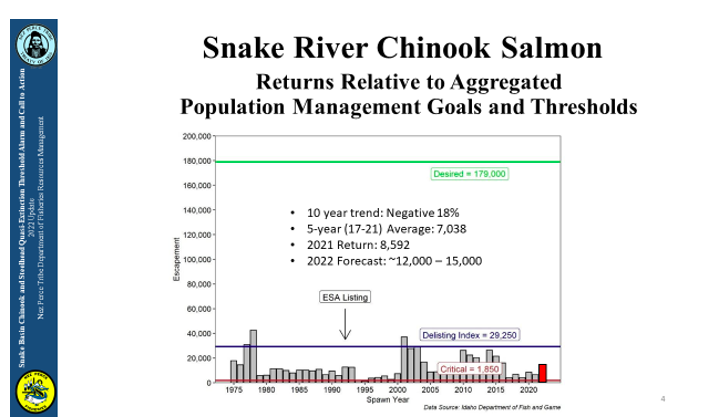 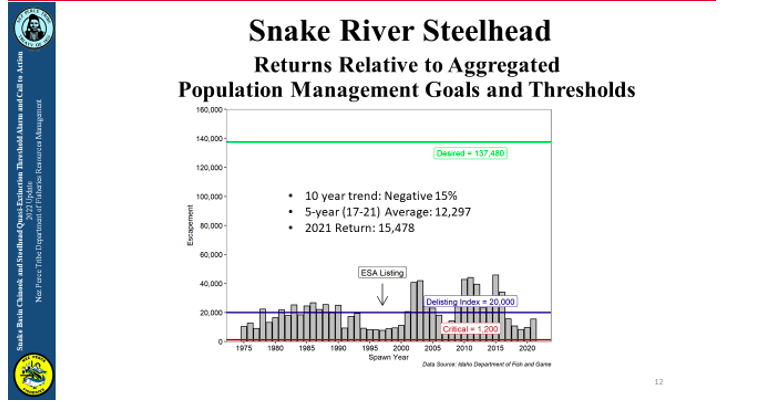 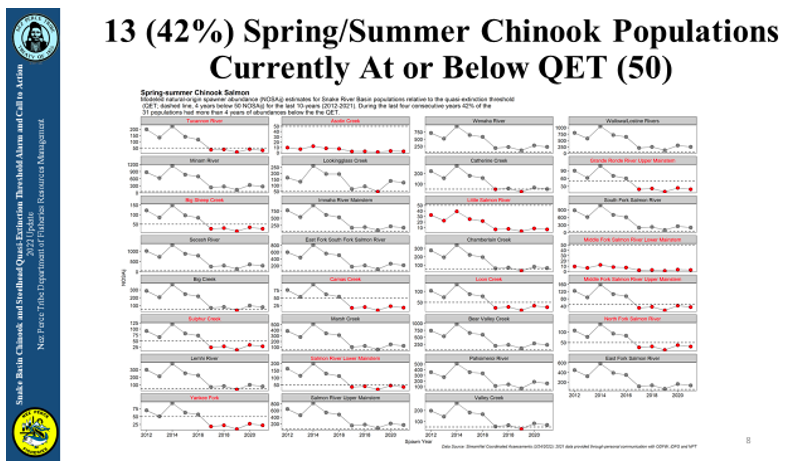 For the spring and summer Chinook populations, the graph above reflects the numbers of spawners in all 31 populations listed under the Endangered Species Act in the Snake River Basin. The department modeled the natural-origin spawner abundance estimates for Snake River Basin populations relative to the QET (dash line meaning 4 years below 50 fish) for the last 11-years (2011-2021).4 The dots on the graph signifies how many spawners were on the spawning grounds in that year.5 The red dots indicate that there were 50 or fewer spawners, but more importantly, the red title for that population indicates that there have been 50 or fewer natural origin spawners on the spawning grounds for at least four consecutive years.5 During the last four consecutive years, 13 (42%) of the 31 populations had more than 4 years of abundances below the QET.4 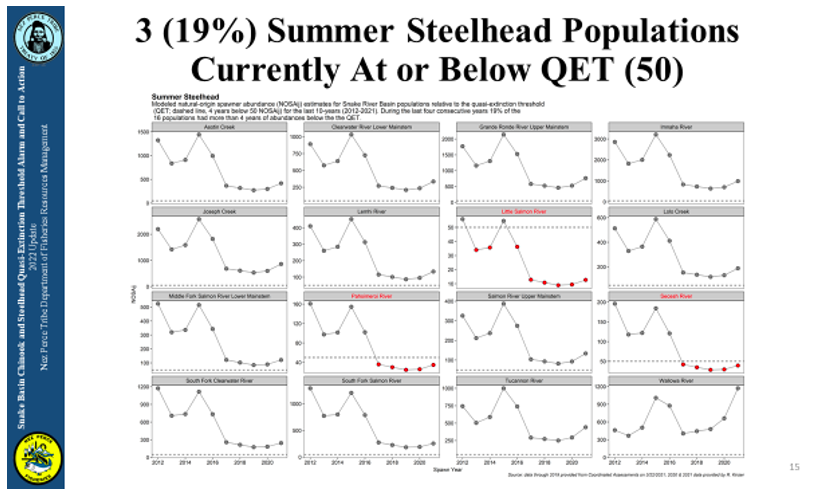 Similar to the analysis above, the summer steelhead populations graph reflects the numbers of spawners in all 16 populations, for which there was data, of the 25 listed under the Endangered Species Act in the Snake River Basin. The department modeled the natural-origin spawner abundance estimates for Snake River Basin populations relative to the QET for the last 11-years (2011-2021).4 During the last four consecutive years, 3 (19%) of the 16 populations had more than 4 years of abundances below the QET.4 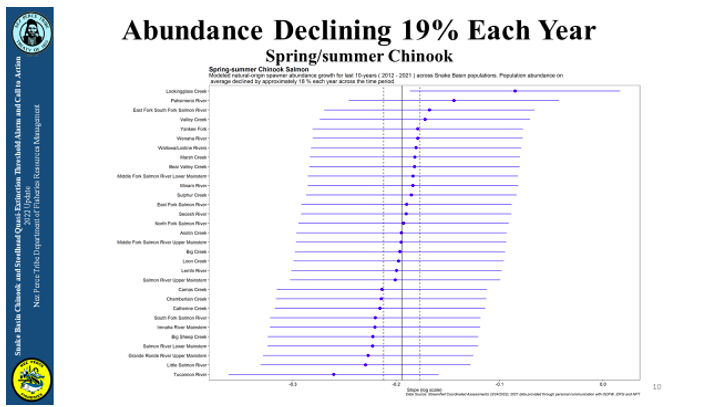 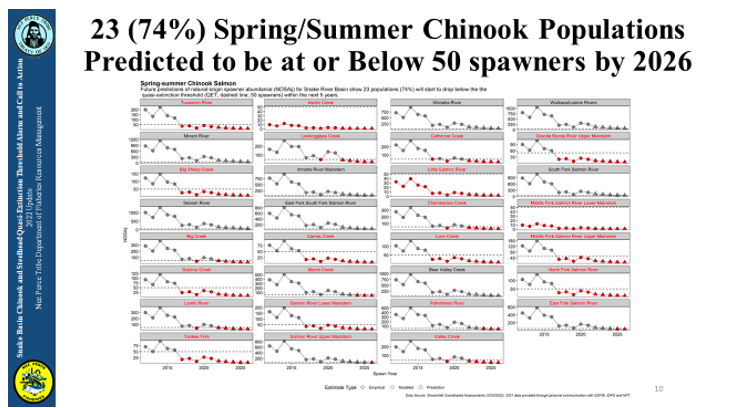 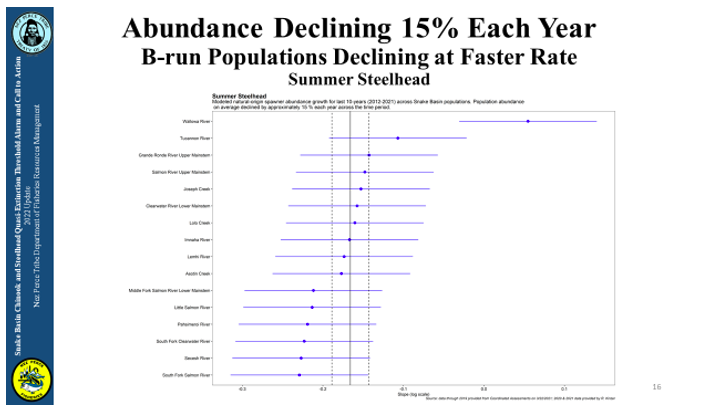 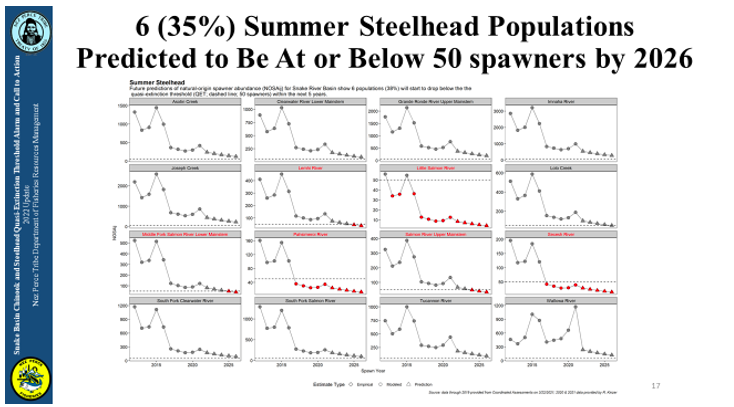 The Snake and Columbia River Basin contains the best available habitat for salmon populations to recover to any significant level of abundance. However, with predictions pushing the populations below 50 spawners, the four lower Snake River dams are a major factor preventing salmon from reaching spawning grounds.

Current salmon and steelhead returns are higher than those of the past 5 years and these fish encountered suitable water temperatures in the lower Snake River reservoirs prior to mid-July. However, recent heat waves have caused temperatures to rise above 68°F. As stated by Jay Hesse, Director of Biological Services of the Nez Perce Tribe’s Department of Fisheries Resources Management, “The increase in Snake River basin natural-origin spring/summer returns occurring this year (2022) is welcomed and consistent with our expectations for improved survival under good ocean conditions and high spill hydro-operations. However, it is important to understand that while the 2022 return is an improvement over recent years, abundance remains precariously low and well below criteria for ESA-delisting - let alone our goals representing healthy and harvestable status.”

Restoring a freely flowing lower Snake River by removing its four federal dams is our only option to address high water temperatures and their impacts on wild salmon and steelhead as well as recovering salmon and steelhead from extinction. Dave Johnson stated in a recent presentation, "Breaching the dams improves survival [by speeding] the passage down to the ocean so fish travel in a river, not in a series of reservoirs. The fish evolutionarily are developed to make it down to the ocean in a certain amount of time. Well, we've extended that period of time to a month so they run out of reserves, they run out of their food by the time they reach the ocean."6

Wild salmon and steelhead returning to their spawning grounds in Idaho are met with high water temperatures of 68°F and above caused by a reservoir system. The dam’s reservoirs create large, stagnant pools that absorb heat from the sun, reaching lethal temperatures for salmon, which kill significant numbers of juvenile (smolts) and adult fish.

“The only way these fish are going to have a chance is if they can get back to the mountains,” stated Dave Johnson. “Otherwise, we lose them. We're losing them every year and we need to turn that around. We need to be able to breach the dams to have those fish get to where they're supposed to be.”6

The path forward is clear: we need a comprehensive solution to remove the lower Snake River dams and protect endangered salmon and orca from extinction, uphold our promises to Tribal Nations, create economic opportunities, and upgrade costly and aging energy, irrigation, and transportation infrastructure.