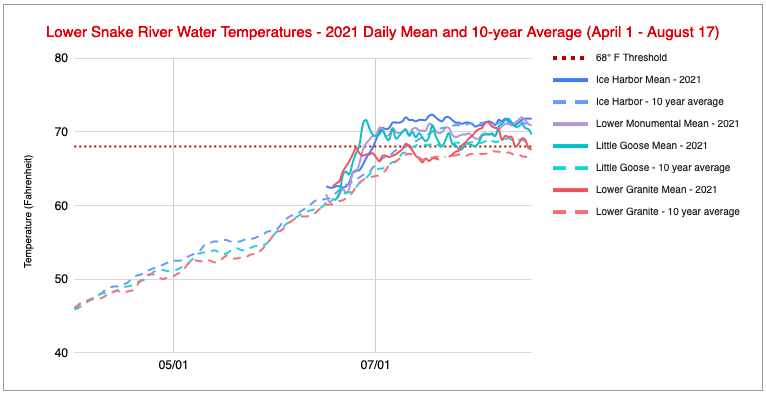 Water temperatures at this time remain high - and harmful - to salmon and steelhead in the lower Snake and lower Columbia River reservoirs:

This week, the release of cold water from the Dworshak reservoir upstream in the Clearwater drainage is cooling the Lower Granite reservoir. However, the benefits of Dworshak’s cold flows are limited and serve only as a short-term solution to cooling water temperatures in the Lower Granite Dam’s reservoir. See Issue 2 for more information. 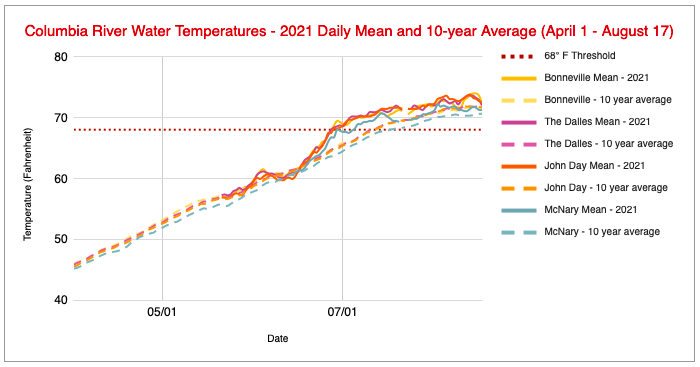 Save Our wild Salmon is committed to working with others in the Pacific Northwest to craft solutions that both protect and restore healthy, self-sustaining, harvestable populations of salmon and steelhead and help tackle the challenges we face from a warming climate. This integrated work to protect both salmon and climate is essential given our coalition’s focus on recovery in the Columbia-Snake River Basin and the predominant role the federal hydro-system plays to endanger these iconic fish and this ecosystem. The effects of climate change are worsening the already-lethal impacts of the dams and their reservoirs by further disrupting the rivers’ natural flows (hydrograph), raising river/water temperatures, increasing native and non-native populations of predatory fish like bass and pikeminnow, and more.

This week, we will focus on the latest Intergovernmental Panel on Climate Change (IPCC) Report and how this report will inform us on climate change-related consequences for the Pacific Northwest and its fish and wildlife and communities.

About the IPCC: The Intergovernmental Panel on Climate Change (IPCC) is the “international body for assessing the science related to climate change. The IPCC was set up in 1988 by the World Meteorological Organization (WMO) and United Nations Environment Programme (UNEP) to provide policymakers with regular assessments of the scientific basis of climate change, its impacts, and future risks and options for adaptation and mitigation.”1The IPCC released the first installment of the IPCC’s Sixth Assessment Report (AR6), Climate Change 2021: The Physical Science Basis, which will be completed in 2022.1

Findings of the IPCC Report:  The U.N. Secretary General António Guterres calls the findings in the IPCC report “a code red for humanity.”2 The report states that greenhouse gas emissions have warmed the climate at a rate that is unprecedented in at least the last 2,000 years.2 Greenhouse gas emissions from “human activities are responsible for approximately 1.1°C of warming since 1850-1900”, and “global surface temperatures were 1.09°C higher in 2011-2020 than in 1850-1900.”1,3 The report states that on “average over the next 20 years, global temperature is expected to reach or exceed 1.5°C of warming (2.7°F increase in average global temperatures).”1

“Global surface temperature will continue to increase until at least the mid-century under all emissions scenarios considered. Global warming of 1.5°C and 2°C will be exceeded during the 21st century unless deep reductions in carbon dioxide (CO2) and other greenhouse gas emissions occur in the coming decades.”4 Furthermore, with a deep reduction in emissions of carbon dioxide (CO2) and other greenhouse gases would limit climate change and it would take 20-30 years to see global temperatures stabilize.1

The IPCC report developed an interactive atlas that shows global temperature rise across different countries. The temperatures include +1.5°C, +2°C, +3°C, and +4°C above pre-industrial levels and all scenarios point that climate changes will increase in all regions around the globe.5 The report states that for the 1.5°C of global warming scenario, there will be an increase in heat waves, longer warm seasons, and shorter cold seasons.1 However, limiting warming at 1.5°C above pre-industrial levels is the best-case scenario as it would mean rapidly cutting fossil fuel emission to “net-zero” by the year 2050 and would eventually stop glaciers from melting and sea-level rise to slowly decrease.6 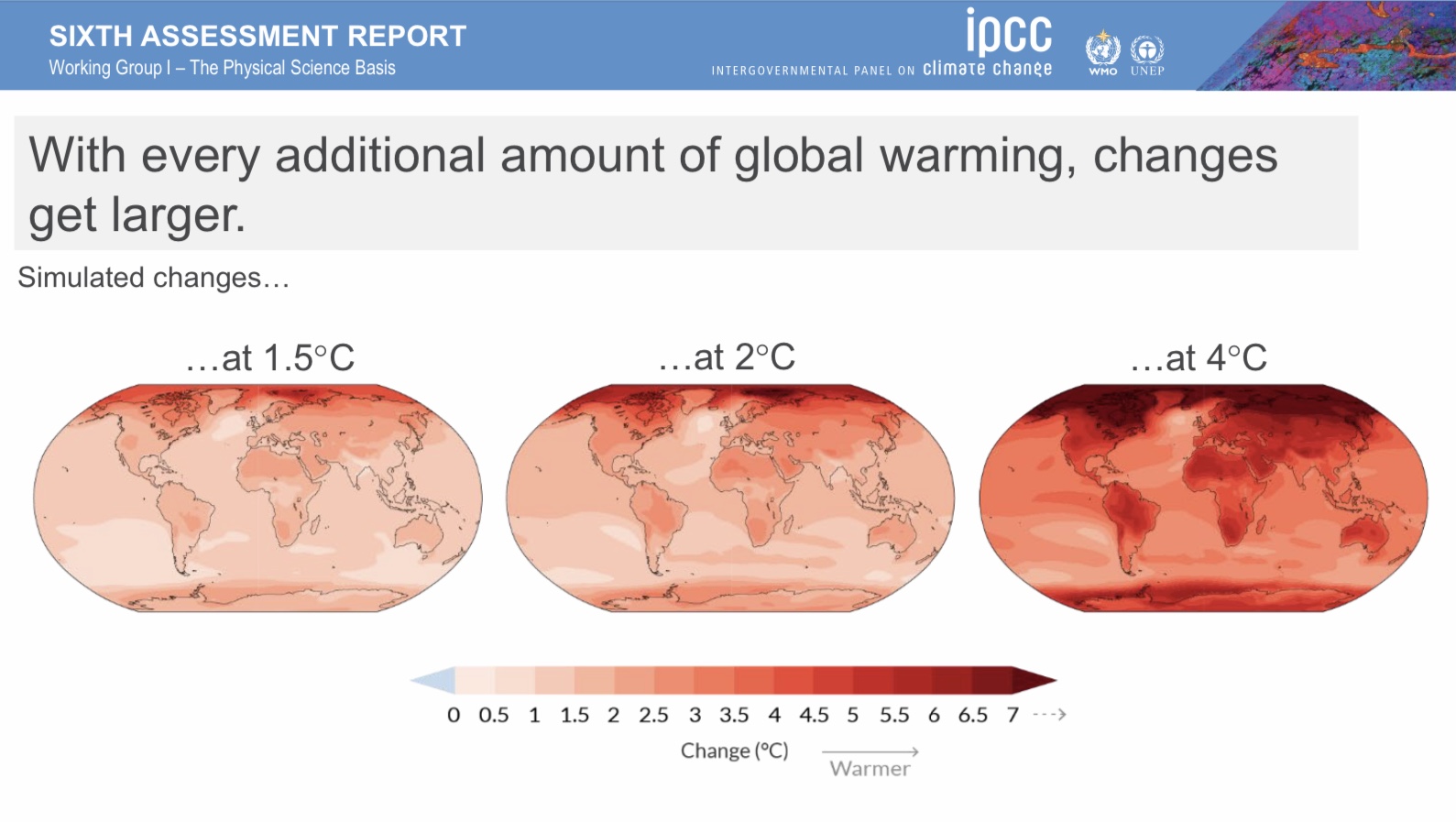 Warming beyond 2 degrees Celsius carries an increased risk of setting off feedback processes that cause climate change to accelerate and bring profound disruptions to different regions, for example:

Possible Climate Futures for the Pacific Northwest: In the Pacific Northwest, ecosystems and biodiversity will suffer from increased wildfires, drought, floods, shrinking glaciers, and low snowpacks, and the spread of invasive species, pests, and disease.8 If greenhouse gas emissions continue on their current pathway, the Pacific Northwest is expected to have extremely hot days and frequent extreme weather events that would also reduce air quality.8 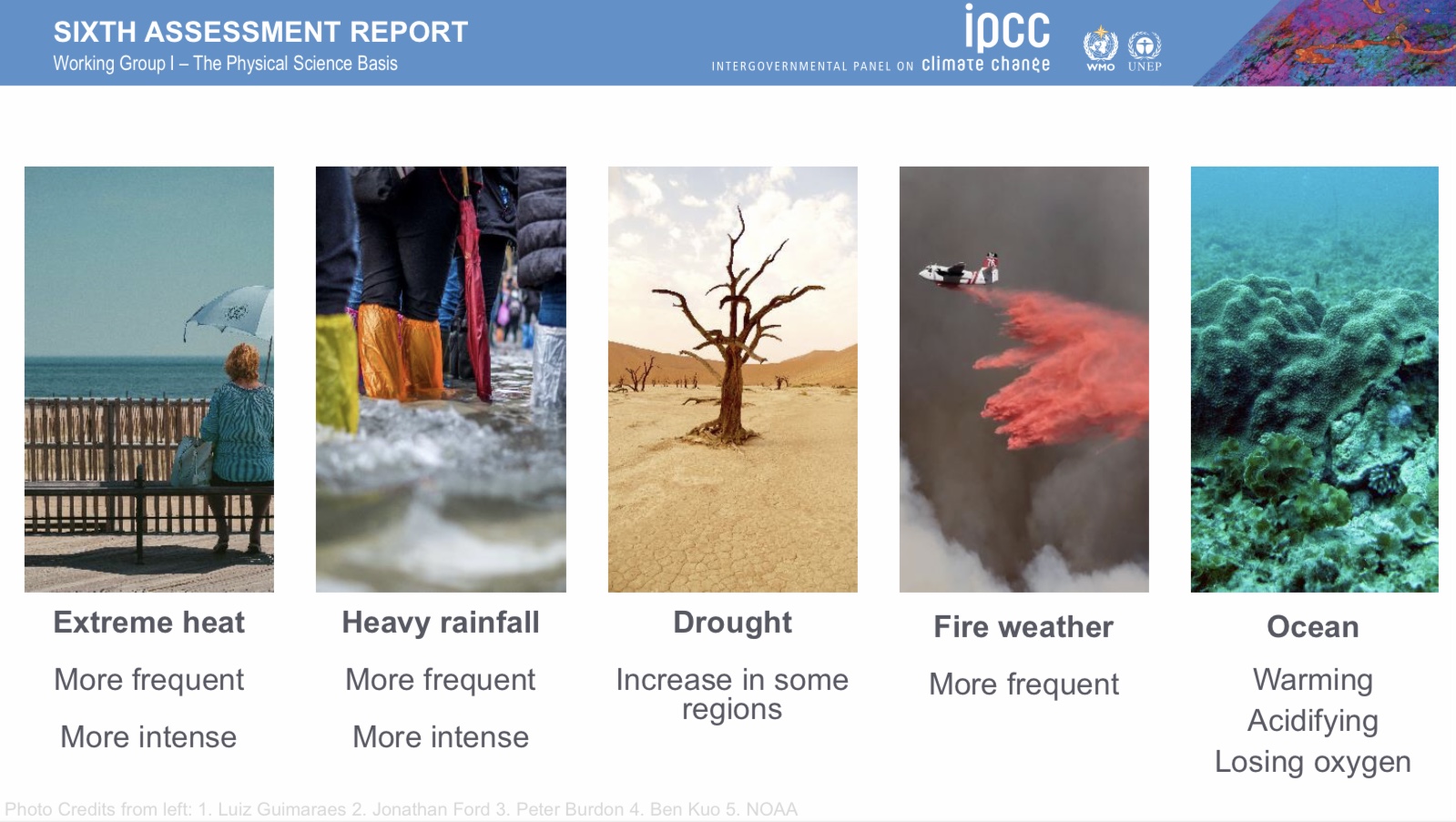 We are currently experiencing extreme weather events such as heatwaves and wildfires in Washington, Oregon, and Idaho. Scientists predict the impacts of 2015’s extreme weather events are foreshadowing our future. During 2015, Northwest average temperatures were about 2.7°C warmer than pre-industrial (1.9°C, above the 1970-1999 average), and Washington state snowpack was 70% normal (1970-1999 average).8 Due to the combined effects of extremely hot air and water temperatures, low 2014-15 snowpack that led to low 2015 runoff, and the presence of dams and their reservoirs, at least 96% of endangered returning adult Snake River sockeye salmon died - a species with an already low population level - during their upriver migration through the lower Columbia and Snake Rivers.11,12

If greenhouse gases continue to rise, we can expect snowpacks to further decline, causing rivers to have lower flows and higher temperatures.10 Climate change will exacerbate these extreme conditions and cause reservoirs to become more dangerous for endangered and threatened salmon species each year.11,12

Healthy Climate and Resilient Habitats are Still Possible:  The IPCC clearly states that the main drivers of climate change are greenhouse gases such as carbon dioxide (CO2), and we have the potential to determine the future course of climate.1 IPCC Working Group 1 Co-Chair Panmao Zhai states, “Stabilizing the climate will require strong, rapid, and sustained reductions in greenhouse gas emissions, and reaching net-zero CO2 emissions. Limiting other greenhouse gases and air pollutants, especially methane, could have benefits both for health and the climate.”1

The World Meteorological Organization (WMO) Chief, Petteri Taalass, also states, “The message of the IPCC report is crystal clear: we have to raise the ambition level of mitigation.”9

For the Pacific Northwest salmon and steelhead, this means, among many other actions, removing the four harmful dams on the lower Snake River to restore a free flowing, more natural and resilient river. Restoring the Snake is an essential mitigation measure to re-create more natural river conditions that these fish need to survive and thrive.13

Fortunately, our region today is equipped to replace non-renewable energy sources and the lower Snake River hydropower dams with carbon-free, clean, renewable, affordable, and salmon-friendly alternatives.13
We have an opportunity to make critical changes that ensure the survival of wild salmon and steelhead, and increase the resilience of rivers and our climate, and meet the needs of people and communities across the Pacific Northwest.