Welcome to Save Our wild Salmon’s Hot Water Report 2020, Week 3. This weekly report presents conditions on the lower Snake and Columbia rivers - like water temperatures, status of salmon and steelhead returns and related topics - via graphs, analyses, and stories. The harmful effects on struggling native fish populations caused by federal dams and their reservoirs is now being exacerbated each year due to warming waters and a changing climate.

We’ll include reports from scientists, fishers, guides, and salmon and river advocates about the status of returning adult salmon and steelhead and the challenges facing their rivers. We'll also explore opportunities to improve their health and begin to rebuild abundant, resilient populations and the many benefits they deliver to Northwest culture, economy and ecology.

II. READING THE DATA (through July 27) 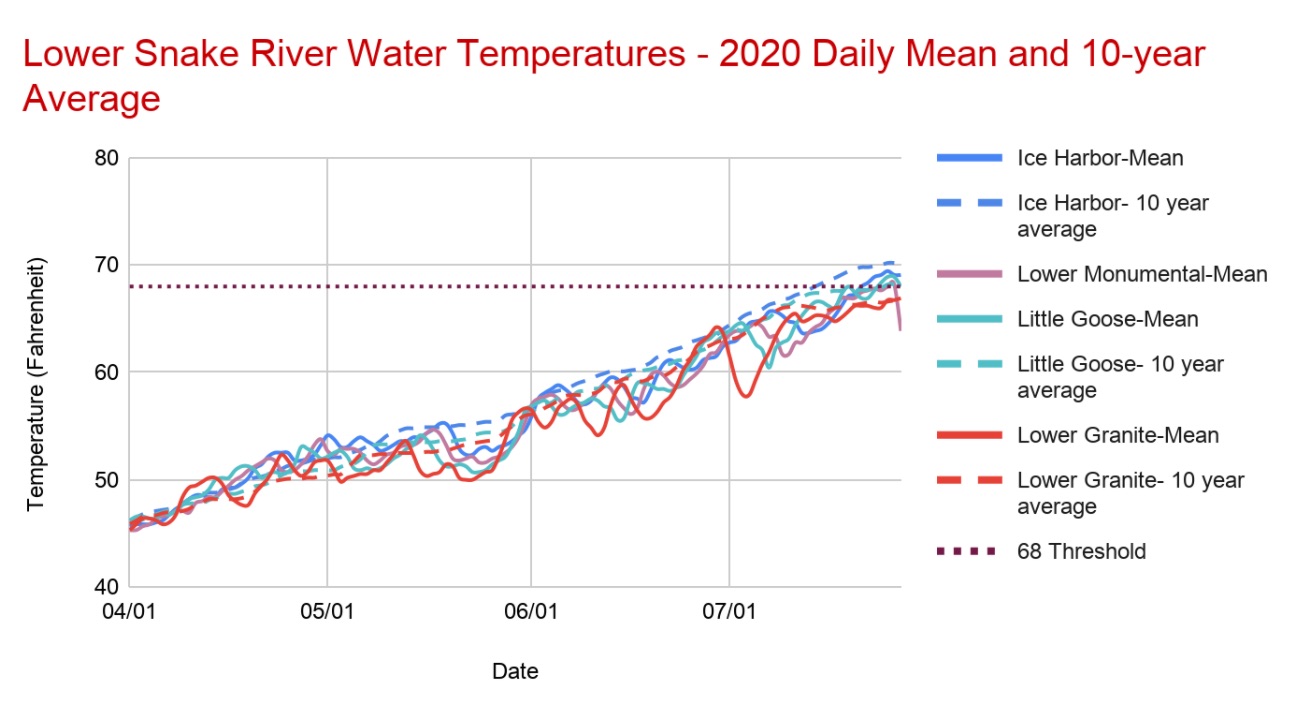 The daily mean temperature at the forebay (upstream reservoir) of each dam is represented in the solid lines and the 10 year average (2010-2020) for each reservoir is represented by the dashed line of the same color. The dotted line across the top of the graph represents the 68°F survival threshold for salmon and steelhead. These fish begin to suffer harmful effects when water temperatures exceed 68° Fahrenheit. The longer temperatures remain above 68°F and the higher the temperatures rise above 68°F, the more severe these effects, including: increased metabolism (energy expenditure), increased susceptibility to disease, reduced fecundity or reproductive potential, and/or death.

A note about Lower Granite's reservoir: Temperatures in Lower Granite’s reservoir in the summer months are typically cooler than the three downstream reservoirs on the lower Snake due to an influx of cold waters released upstream from the Dworshak reservoir. Dworshak Dam releases cold waters into the Clearwater River that then flows into the Snake River in Lewiston ID. Unfortunately, this cold water mixes in this reservoir and its benefits for fish dissipate here before the waters flow further downstream. EPA models show that a freely flowing lower Snake would carry these cooler waters all the way downstream to its confluence with the Columbia River near the Tri-Cities (WA). 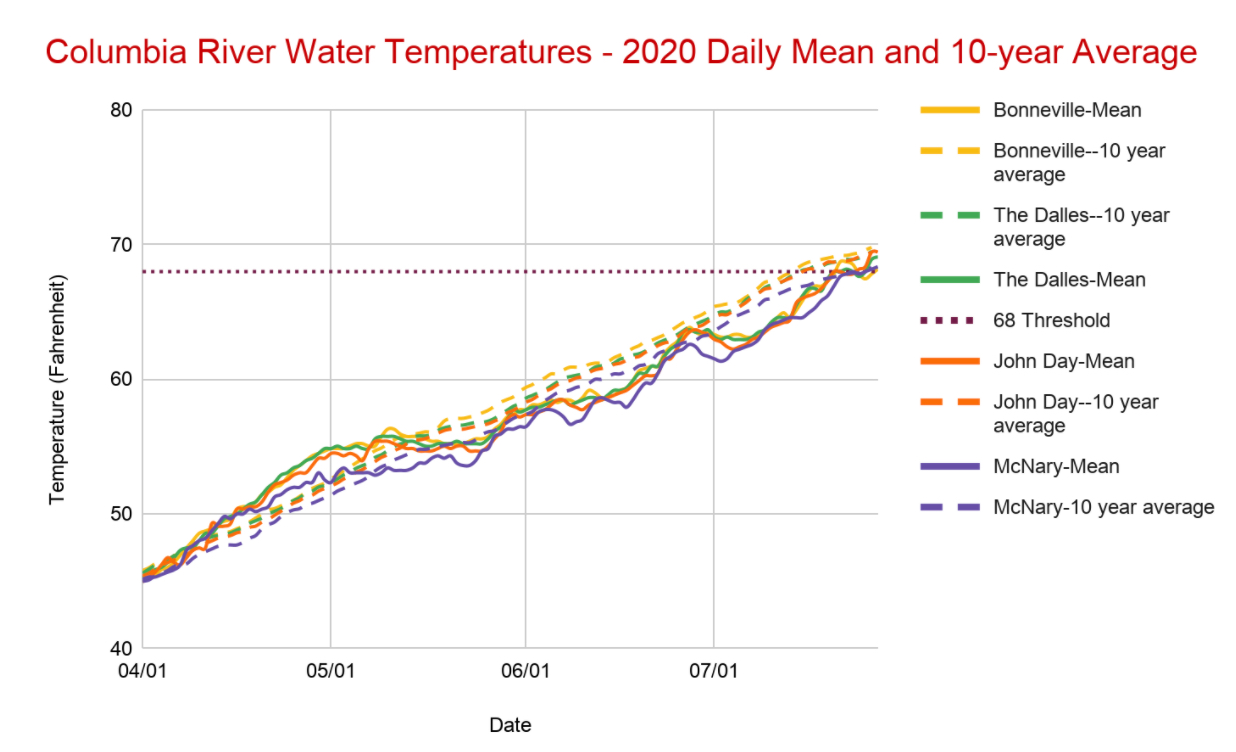 The lower Columbia water temperatures show a fairly steady increase over the past four months. They hit a grim benchmark this past week: all four lower Columbia River reservoirs exceeded 68°F by one degree or more. John Day’s reservoir hit the high mark this week at 70.7°F. Based on past summers, we expect these four reservoirs to remain above 68°F for the next 3-5 weeks. The issue of hot reservoirs in the lower Columbia and lower Snake rivers has been recognized as big problem for salmon and steelhead since at least the 1990s, but federal recovery efforts have failed to address it.

This week, NOAA is expected to release its 2020 Biological Opinion (federal salmon plan for the Snake and Columbia rivers) and the three federal dam agencies will publish their Final EIS for Columbia Basin salmon and dams. Next week’s Hot Water Report will focus on the contents of these documents. Based on the Draft EIS released earlier this year, the “new” federal strategy will once again fail to address these hot water temperatures that are caused mainly by the presence of the dams and are now being exacerbated by a warming climate.

On the lower Snake River this week, the Ice Harbor Dam registered the highest temperature at 69.62°F. All reservoirs, except the Lower Granite, have registered above 68°F this week, thus impacting fish survival rates. The Lower Granite is just barely under that threshold, but will likely get over 68°F in the coming weeks.

Adult returns of wild salmon and steelhead to the Columbia and Snake rivers and their tributaries continue to bump along the bottom – far from historic returns and just 25% of the returns we saw as recently as 2015. Unfortunately, all Snake River stocks are trending in the wrong direction. 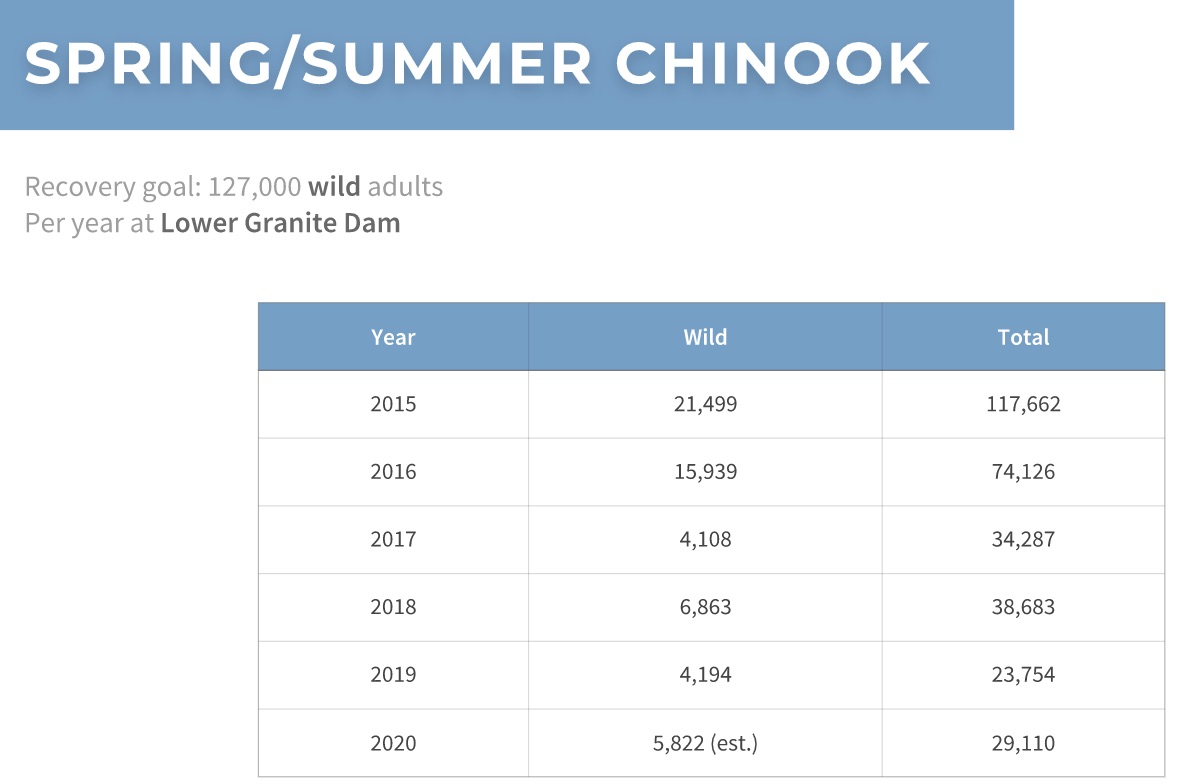 SPRING/SUMMER CHINOOK: As of July 20th, an estimated 5,822 wild spring/summer chinook had passed Lower Granite Dam near Lewiston, ID. The recovery goal for this stock for wild fish, however, is 127,000. Historically, several million adult spring chinook returned annually to the Columbia and Snake rivers and their tributaries. 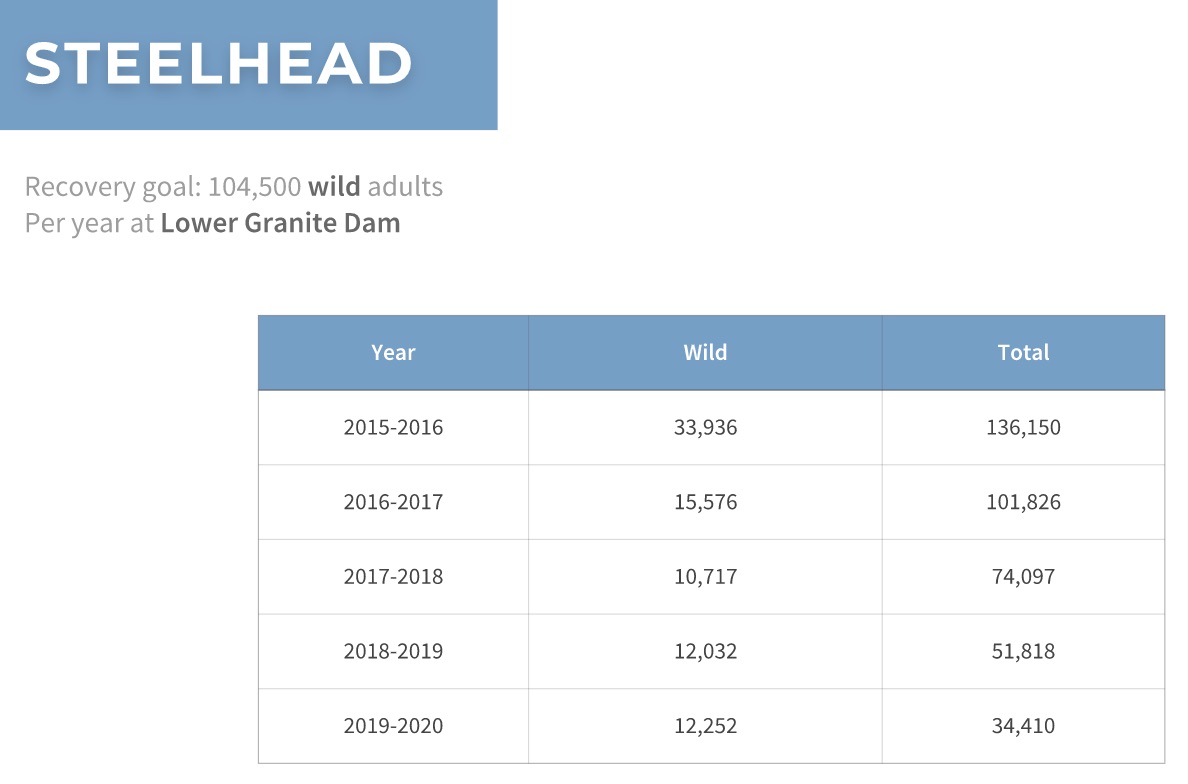 STEELHEAD: The wild steelhead numbers at Lower Granite are coming in so far at 12,252, though their recovery goal is 104,500 wild adults. 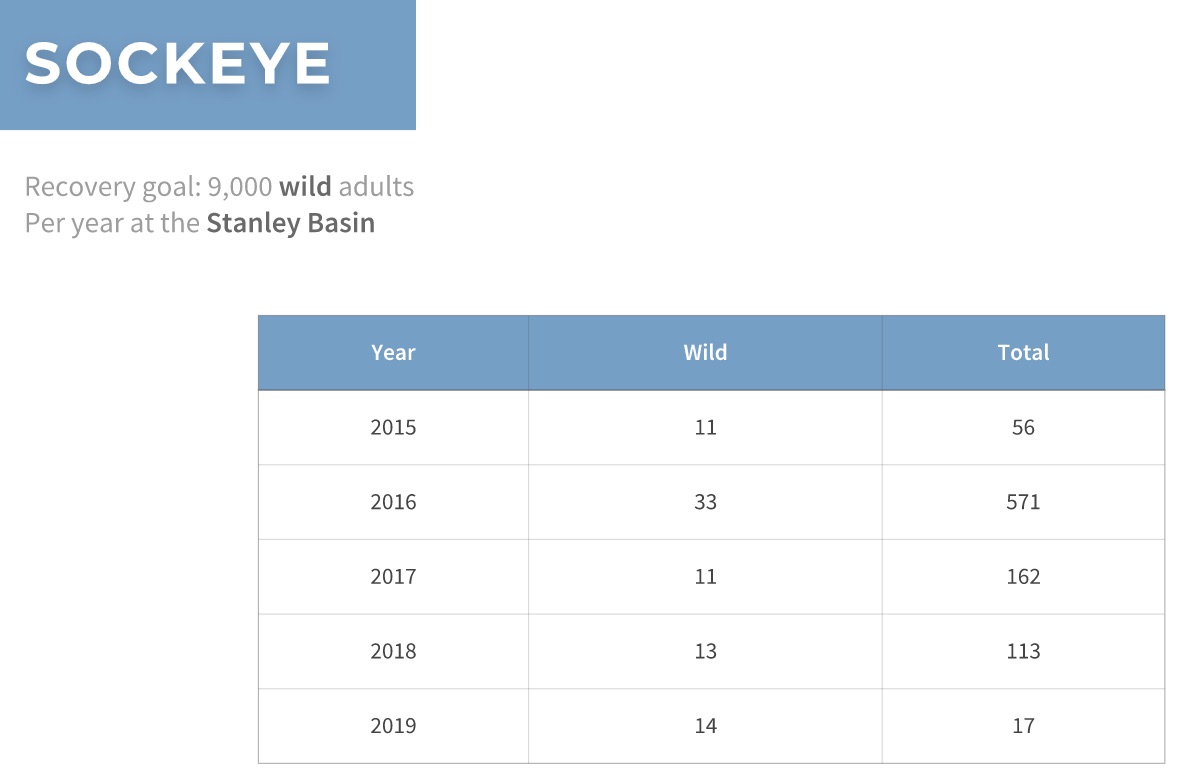 SOCKEYE: Sockeye numbers are not solidified for the season just yet, though with the cooler start to the summer we’re hoping their numbers will be  better than last year, when just 14 'natural' sockeye successfully reached their spawning grounds  in the Stanley Basin in Idaho.

Overall, adult salmon and steelhead returns to the Snake River Basin so far this year are just a fraction of the 10-year average. Things are moving in the wrong direction for salmon and steelhead – and for the fishing communities, orcas and other wildlife that rely on healthy salmon runs for their survival and well-being.