Welcome to Save Our wild Salmon’s Hot Water Report 2020, Week 2. This weekly report presents conditions on the lower Snake and Columbia rivers - like water temperatures, status of salmon and steelhead returns and related topics - via graphs, analyses, and stories. The harmful effects on struggling native fish populations caused by federal dams and their reservoirs is now being exacerbated each year due to warming waters and a changing climate.

We’ll include reports from scientists, fishers, guides, and salmon and river advocates about the status of returning adult salmon and steelhead and the challenges facing their rivers. We'll also explore the opportunities before us to improve their health and begin to rebuild abundant, resilient populations and the many benefits they deliver to Northwest culture, economy and ecology. In this issue, be sure to read through to section IV to learn about successful dam removals. 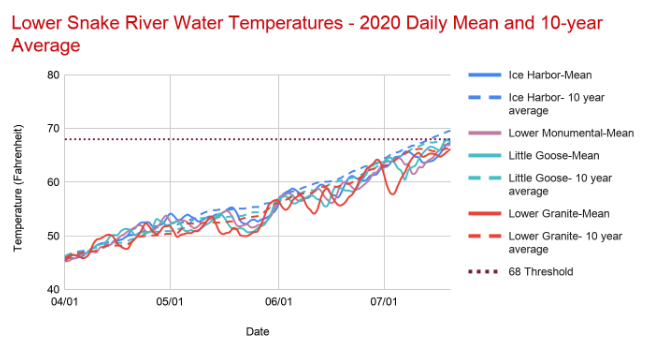 The daily mean temperature at the forebay (upstream reservoir) of each dam is represented in the solid lines and the 10 year average (2010-2020) for each reservoir is represented by the dashed line of the same color. The dotted line across the top of the graph represents the 68°F harm/survival threshold for salmon and steelhead. These cold water species begin to suffer harmful effects when water temperatures exceed 68° Fahrenheit. The longer temperatures remain above 68°F and the higher the temperatures rise above 68°F, the more severe these effects, including: increased metabolism (energy depletion), increased susceptibility to disease, delayed migration, reduced fecundity or reproductive success, and/or death.

Temperatures in the four lower Snake River reservoirs over the last seven days are all trending below the 10-year average for this time of year. This is good news for imperiled salmon and steelhead - adults and juveniles - that are in the mainstem river at this time - for as long as it lasts. The reasons for the slightly-lower-than-average temperatures to date: a cooler-than-average spring and early summer and average snowpack that has melted at a steady rate during this time period.

While the steadily rising water temperatures in the lower Snake River remain so far this year below 68 degrees, there is one notable exception: the Little Goose Dam forebay. It hit 68.54°F this week (see table below). We expect these harmful conditions for salmon and steelhead to steadily worsen in this reservoir well into August and that other lower Snake reservoirs will likely soon follow suit.

Although spring 2020 has not been as hot as the record-breaking year of 2015, temperatures are clearly on the rise and beginning to push past 68°F. 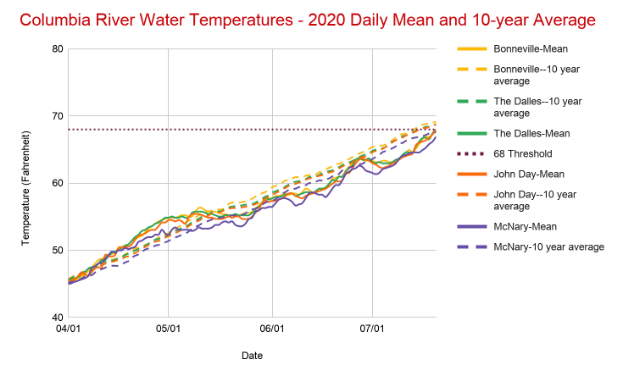 The lower Columbia temperatures this spring and early summer show considerably less fluctuation compared to the lower Snake River as it has a higher volume, lower grade, and often more temperate climate.

Like the lower Snake River, current reservoir temperatures in the lower Columbia River remain below the 10-year average for this time of the year, but all four reservoirs registered temperatures above 68°F (see table below). Based on data from previous years, we can expect these temperatures in the lower Columbia to remain above 68°F for at least the next four weeks - and to continue to rise. As stated above, the longer temperatures remain above 68°F and the higher they rise above this key threshold, the more severe the stresses and harms, including increased metabolism (energy depletion), increased susceptibility to disease, delayed migration, reduced fecundity or reproductive success, and/or death.

On the lower Snake River this week, for the first time this year, water behind the Little Goose Dam exceeded registered 68°F - registering a high temperature of 68.54°F. This is followed by Ice Harbor Dam and Lower Monumental Dam with 67.64°F.

Science and experience over the past 30+ years demonstrates conclusively that removing dams and restoring freely flowing rivers works! It works for salmon and steelhead and other fish and wildlife populations. Restoring and reconnecting rivers builds much-needed resilience into ecosystems stressed today by a changing climate. And when properly planned and implemented, restored rivers also deliver big economic and environmental benefits to communities.

One of the most impactful actions that we can take to mitigate the harms to rivers caused by the warming climate - including addressing high water temperatures - is to restore them and reconnect them. The more intact and protected rivers are, the greater their resilience, the higher their water quality and cooler their waters.

Nearly 1,800 dams have been removed nationwide in the last 20 years, 114 in the Northwest states, including 33 in Washington State.

Below are just three examples of salmon-bearing rivers in the Washington State that have been restored in recent years - or are now in process. These success stories all result from collaborative efforts involving tribal communities, state and federal agencies, non-governmental organizations, and regular people working together to solve shared problems and seize opportunities. 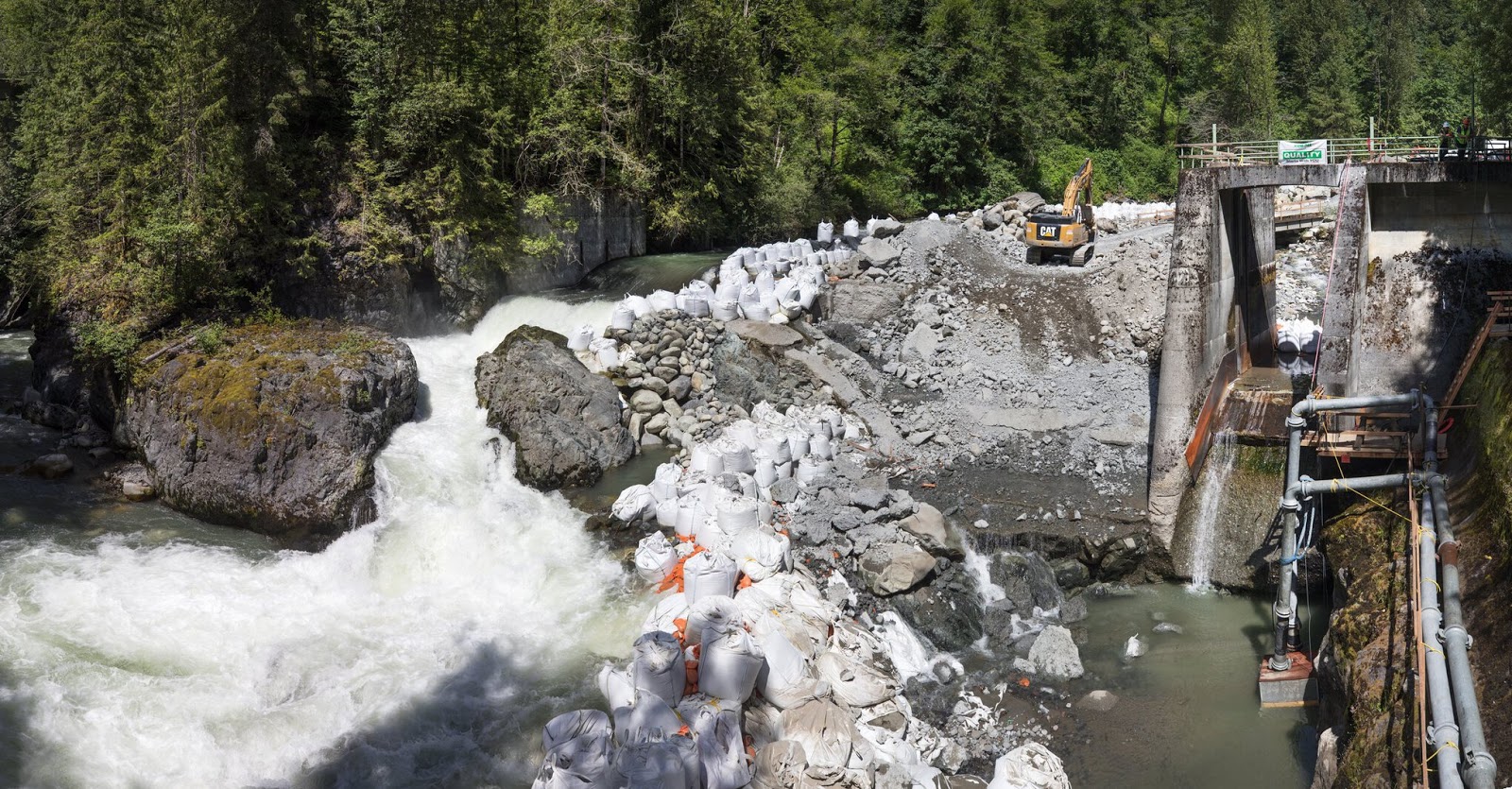 Middle Fork Nooksack, Whatcom County, WA - Summer 2020: The Middle Fork Nooksack River Dam was completed in 1961 to provide water to the City of Bellingham; it is now in the process of demolition. This is a $17 million project that will re-create a freely flowing river and restore access for anadromous fish to 16 miles of ancestral habitat. In fact, 45% of steelhead’s historic habitat will be restored and Chinook populations are expected to increase by about 30%. By removing the dam, fish species will return, and the river will also become healthier and richer in terms of nutrients and sediment flows. Returning anadromous species to the river allows nutrients to spread from river to ocean and back to the river - benefiting freshwater and marine ecosystems and their inhabitants including orcas, eagles, bears and much more. This restoration project will not address all the problems facing the Nooksack River watershed today, but it represents an essential step forward. Project partners include the Nooksack Tribe, City of Bellingham, American Rivers and others.

The Revelator: A Dam Comes Down — and Tribes, Cities, Salmon and Orcas Could All Benefit (July 14, 2020) 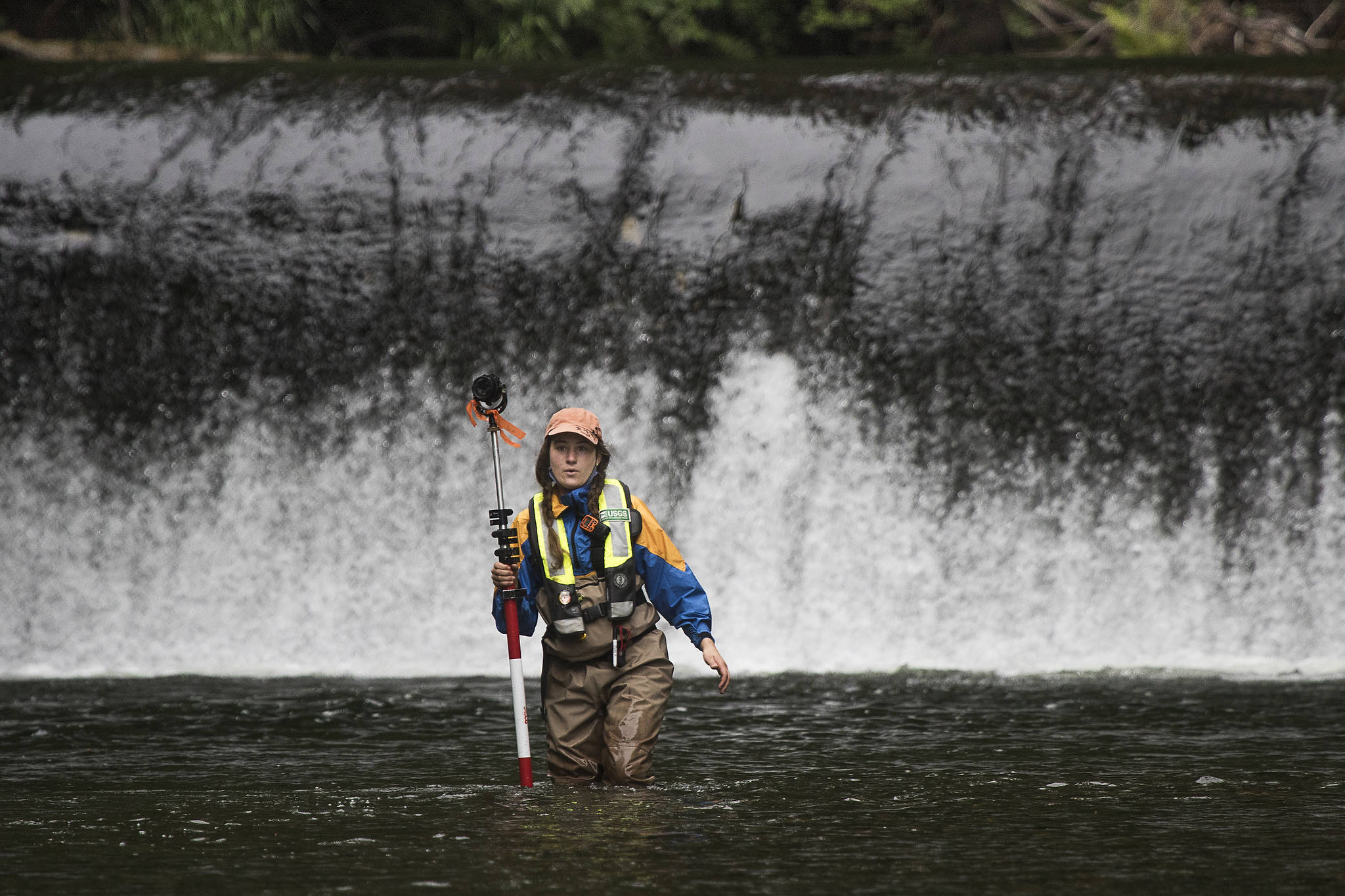 Pilchuck River, Snohomish County, WA - Summer 2020: The removal of the Pilchuck River Dam is another big step forward to reconnect a river system and reintroduce salmon, steelhead, lamprey eel and other species to high quality habitat that has been blocked for more than a century. Many dam projects include installing new technology like fish ladders, but in this case, it made far more sense to remove the Pilchuck Dam and reap the benefits of restoring the river to its natural state. It was built long ago as a water supply diversion dam, but it is no longer used for this purpose. Project partners include the Tulalip Tribe and the City of Snohomish.

HeraldNet (Pilchuck): A major fish barrier on the Pilchuck River is coming down (July 6, 2020) 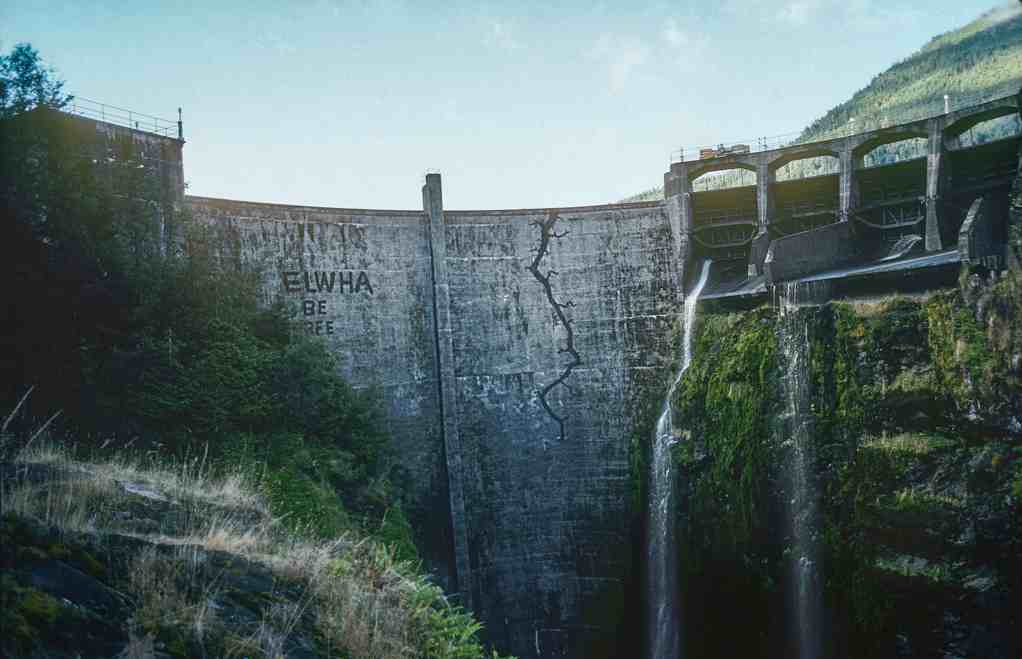 Elwha River, Jefferson County, WA - 2014: The restoration of the Elwha River is one of our nation’s largest and most successful dam removal projects to date. Built over a century ago to provide energy to nearby communities, the Elwha dams blocked 76 miles of excellent river and stream habitat and devastated nearly a dozen anadromous fish populations including chinook, coho, sockeye and steelhead. The decision to build the dams violated early Washington state laws prohibiting barriers to fish passage and ignored the stake and interests of the Lower Elwha Klallam Tribe - the area’s original inhabitants - who have lived along this river since time immemorial. The dams devastated the river and its fish and wildlife - and disrupted its spiritual, cultural, nutritional and economic values for the Tribe. In addition to lacking fish passage, the dam also choked important sediment flows from reaching the estuary and coastal lands, and the anadromous fish species that survived were left with just five miles of available river habitat just upstream from the river's mouth.

After a 30-year campaign led by the Lower Elwha Klallam Tribe, local conservation leaders and NGOs, removal began in 2012 and lasted two years. Eight years later, Elwha River restoration is a tremendous success story: salmon and steelhead are returning; bird and mammal populations are increasing; the estuary and coastal habitats are recovering, and much more. The river is restoring itself, fish and wildlife populations are recovering, and an historic wrong to the Lower Elwha people has begun to be addressed.