Welcome to Save Our wild Salmon’s Hot Water Report 2020. This weekly report during this summer will present the conditions on the lower Snake and Columbia rivers - like water temperatures, status of salmon and steelhead returns and related topics -  via graphs, analyses, and stories. The harmful effects on struggling native fish populations caused by federal dams and their reservoirs is now being exacerbated each year due to warming waters and a changing climate.

Each report will provide an update on real-time water temperatures in the lower Snake and Columbia river reservoirs, the week's high temperature of the forebay waters above each dam. We’ll also hear from scientists, tribal fishers, fishing guides, and salmon and river advocates about the status of returning adult salmon and steelhead and the challenges facing their rivers. We'll also the opportunities before us to improve their health and begin to rebuild abundant, resilient populations and the many benefits they deliver to Northwest culture, economy and ecology.

Furthermore, the top threat facing the region’s critically endangered Southern Resident orca is a lack of prey. These orcas depend mainly on chinook salmon which comprise roughly 80 percent of their diet. As chinook salmon populations have decreased in Northwest coastal waters - and especially Snake River spring chinook - the Southern Residents population has dwindled. Just 72 individual whales remain today. These mammals are struggling to survive and reproduce - and urgently need more food.

I. READING THE DATA - Lower Snake and Columbia River Temperatures 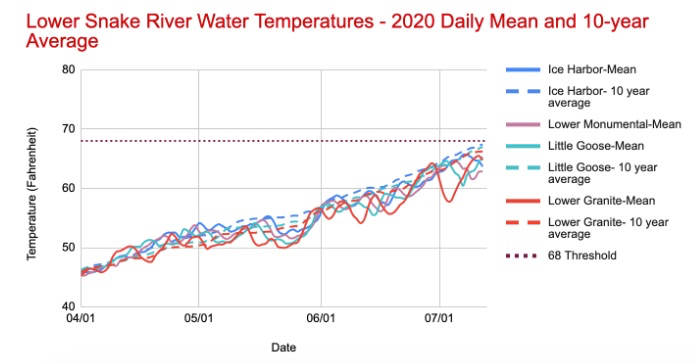 The daily mean temperature at the reservoir forebay (immediately upstream from the dam) is represented with solid lines and the 10 year average (2010-2020) temperature with dashed line of the same color. The dotted line across the graph represents the 68°F survival threshold for adult and juvenile fish. Salmon and steelhead begin to suffer harmful effects when water temperatures exceed 68° Fahrenheit. The longer temperatures remain above 68°F and the higher the temperatures rise above 68°F, the more severe the effects, including: increased metabolism, increased susceptibility to disease, reduced fecundity or reproductive potential, and/or death.

Although Spring 2020 was not as hot as the record-breaking year of 2015, temperatures have risen steadily since April. A healthy free flowing river offers a range of habitats including pockets of cold water where adult (moving upstream) and juvenile fish (moving downstream) can rest and recover during their migration. Reservoirs, however, slow the current, offer little shade and create a huge surface that collects and holds solar radiation. The lower Snake River reservoirs also spread water temperatures uniformly throughout, eliminating natural these critical cold water refuges. As climate impacts increase water temperatures, alter hydrographs and reduce snowpack, this migration corridor for salmon and steelhead has become more deadly over time. 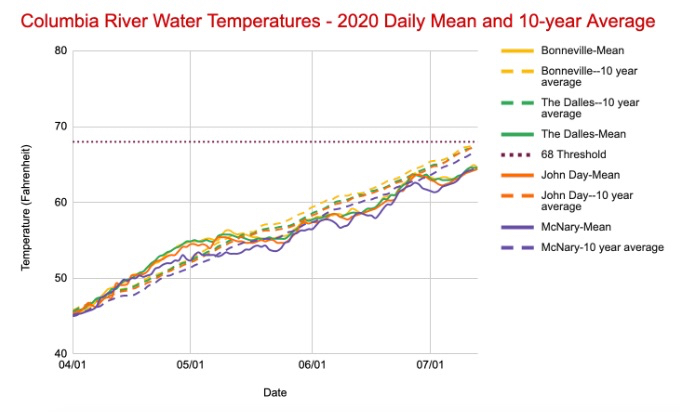 In comparison to the lower Snake River,  the lower Columbia River reservoirs show considerably less fluctuation in temperatures as they have higher volume and a more temperate climate. In early spring this year, temperatures rose above the ten-year average though this reversed in mid-May. As we officially enter the summer season, temperatures in the mainstem lower Columbia river, like the Snake, are steadily rising and approaching the 68 degree “harm threshold” for salmon and steelhead.

The Bonneville Dam registered the highest temperature on the lower Columbia River this week at 65.3°F, with the McNary Dam following at 64.94°F.

II. HOW RESERVOIRS HARM RIVERS AND SALMON AND STEELHEAD

Hot water in the summer months has become the norm on the lower Snake and the lower Columbia rivers due largely to the reservoirs the dams create. The reservoirs block the freely flowing rivers and the large artificial pools absorb huge amounts of solar radiation - and the waters warm. The slow-moving reservoirs destroy the diverse micro-habitats including important cold-water refuges. These pockets of cold water are vital for fish to rest and recover before continuing their migration. The rising temperatures and reductions in snowpack in recent decades due to climate change has resulted in lower survival and lower reproductive success for endangered salmon and steelhead.

Warm river waters impact cold water fish species but there are other reasons that salmon and steelhead are struggling to survive. Dams damage the health of rivers, degrading fish habitats, decreasing water quality and disrupting flow thus limiting the movements of nutrients and sediment. Not only do fish struggle because of the hot water in reservoirs, but many struggle to make their journey downstream for spawning. The warm, slow-moving waters in these reservoirs also support large populations of native and invasive fish like pike minnow and bass which prey especially on ocean-bound smolts in the spring and summer months.

Dams like those on the lower Snake and Columbia rivers disrupt natural ecosystems, the fish and wildlife species that rely on them, as well as social and cultural benefit the rivers provide. Salmon are a keystone species and their losses send a ripple effect to other species and ecosystem as a whole. Restoring the lower Snake River will address many of these problems - hot water, increased predator populations, a slowed current and increased juvenile salmon migration times - and is essential for protecting salmon and steelhead from extinction and rebuilding the many benefits they provide for the people of the Northwest and nation.

III. ABOUT THE SAVE OUR WILD SALMON COALITION

Save Our wild Salmon (SOS) is a diverse, nationwide coalition that has been working to recover salmon and steelhead to the Pacific Northwest since 1991. Over 16 million salmon used to return to the Columbia-Snake River Basin each year. Today, all four remaining species of salmon and steelhead in the Snake River face extinction. The steep losses of this keystone species has devastated the many communities, cultures, economies and ecology of the Pacific Northwest.

Since 1998, our coalition has led a regional effort to restore the lower Snake River by removing its four federal dams and replace its modest services with alternatives. For the past three decades, Tribal, federal, state and independent scientists have identified restoring the lower Snake River as the single most beneficial action we can take to recover its endangered fish and essential for protecting them from extinction. With more than 5,500 miles of pristine, protected rivers and streams above the lower Snake River, this is our nation’s best river and salmon restoration opportunity.

Earthjustice: What You Need To Know About Endangered Salmon (March 2020)