Welcome to Save Our wild Salmon’s Hot Water Report 2020, Week 4. This weekly report presents conditions on the lower Snake and Columbia rivers - like water temperatures, status of salmon and steelhead returns and related topics - via graphs, analyses, and stories. The harmful effects on struggling native fish populations caused by federal dams and their reservoirs is now being exacerbated each year due to warming waters and a changing climate.

We’ll hear from scientists, fishers, guides, and salmon and river advocates about the status of returning adult salmon and steelhead and the challenges facing their rivers. We'll also explore opportunities to improve their health and begin to rebuild abundant, resilient populations and the many benefits they deliver to Northwest culture, economy and ecology.

II. READING THE DATA (through August 4) 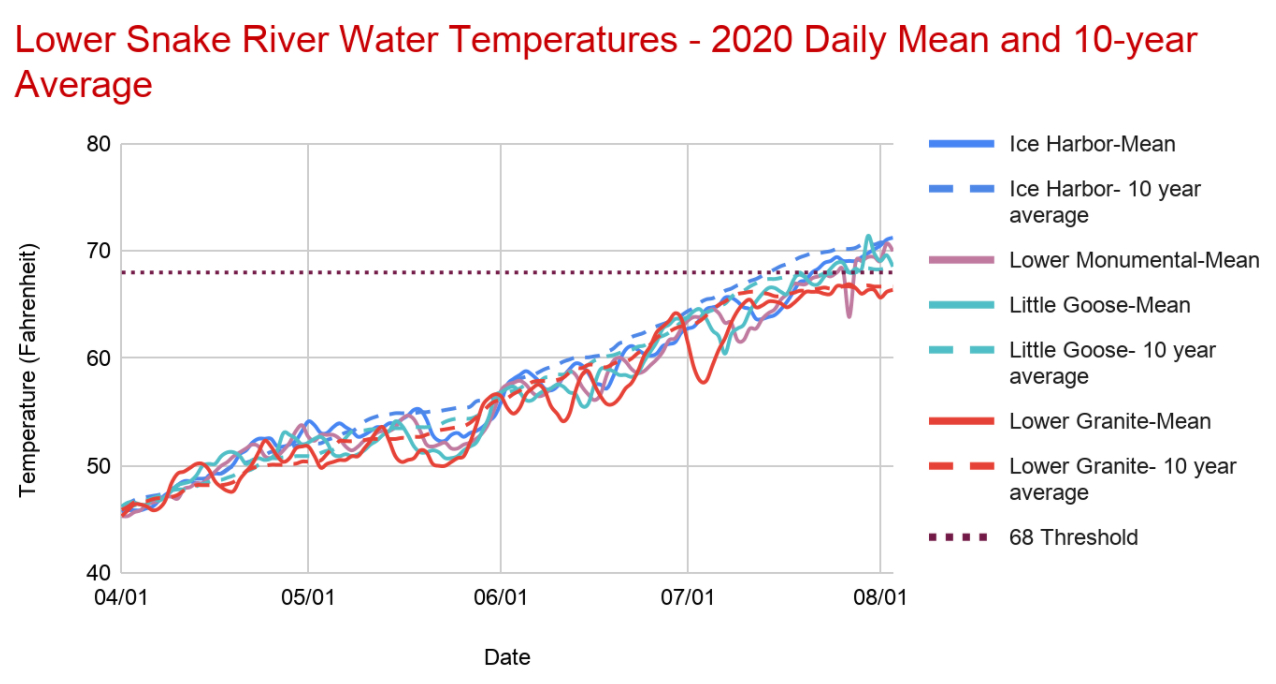 The daily mean temperature at the forebay (upstream reservoir) of each dam is represented in the solid lines and the 10 year average (2010-2020) for each reservoir is represented by the dashed line of the same color. The dotted line across the top of the graph represents the 68°F survival threshold for salmon and steelhead. These fish begin to suffer harmful effects when water temperatures exceed 68° Fahrenheit. The longer temperatures remain above 68°F and the higher the temperatures rise above 68°F, the more severe these effects, including: increased metabolism (energy expenditure), increased susceptibility to disease, reduced fecundity or reproductive potential, and/or death.

A note on Lower Granite Dam’s reservoir: Temperatures in the Lower Granite reservoir in the summer months are typically cooler than the three downstream reservoirs on the lower Snake due to an influx of cold water originating in the Dworshak reservoir, which is located on the North Fork Clearwater River on the Nez Perce Reservation. Each summer, Dworshak Dam is drawn down 80 feet for temperature control and flow augmentation to help juvenile salmon survive their journey to the ocean. While this operation is beneficial for cooling the lower Snake, it does negatively impact recreation in the reservoir, and in the Clearwater River, which is too cold for area residents to swim in. The cold water mixes in Lower Granite reservoir and its benefits for fish dissipate here before the waters flow further downstream. EPA models show that a freely flowing lower Snake would carry these cooler waters (and their benefits for salmon and steelhead) all the way downstream to its confluence with the Columbia River near the Tri-Cities (WA). 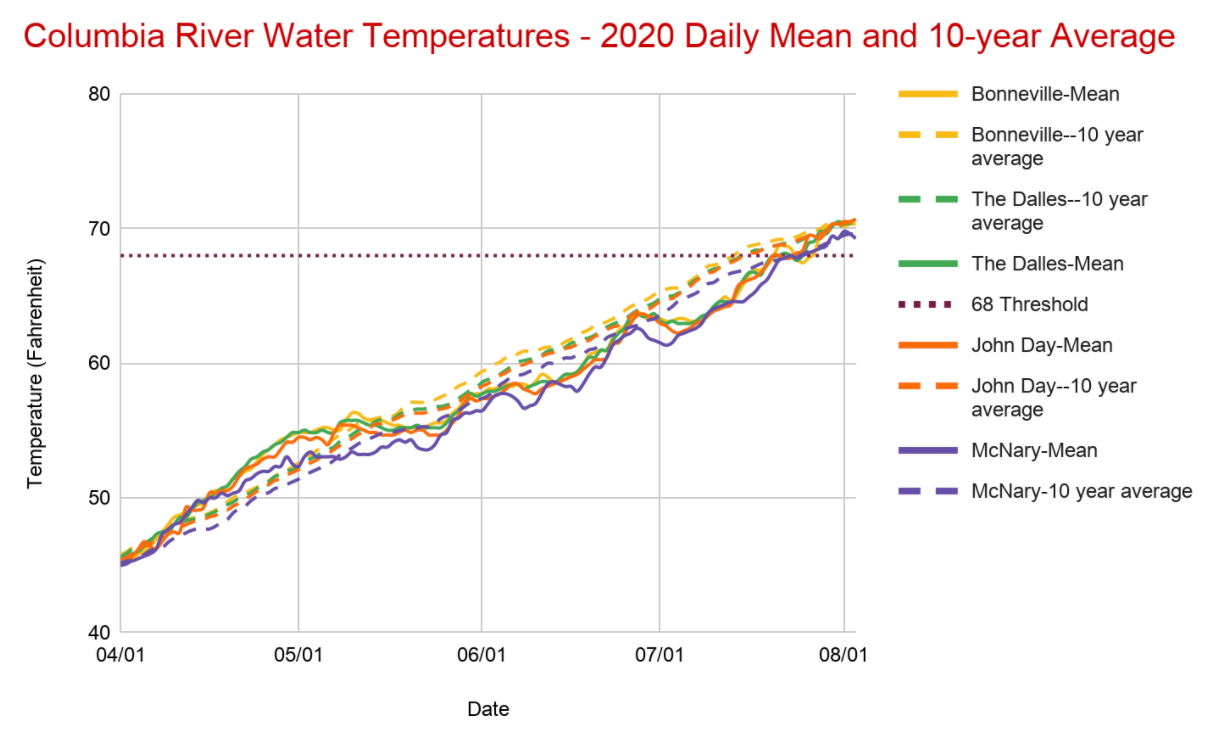 All four lower Columbia River reservoirs continue to exceed 68°F by up to three degrees. All the reservoirs’ water temperatures currently exceed the 10-year average for this time of year. Based on past summers, we expect these four reservoirs to remain above 68°F for the next few weeks. The issue of hot reservoirs in the lower Columbia and lower Snake rivers has been recognized since at least the 1990s as a significant problem for salmon and steelhead survival and recovery but federal recovery efforts have failed to address it. Last week, the federal government released its long-awaited Final EIS and 2020 Biological Opinion (“BiOp” or federal salmon plan) for endangered Columbia-Snake salmon and steelhead. These “new” documents repeat many of the government’s past mistakes, including its failure to address this deadly phenomenon of warming waters caused by the reservoirs and a changing climate. Read on to learn more about salmon advocates’ views on the FEIS and BiOp.

On the lower Snake River this week, the Little Goose Dam registered the highest temperature at 72.68°F - nearly 5°F warmer than levels that coldwater fish require. Again this week, all reservoirs except Lower Granite are registering above 68°F. Lower Granite Dam’s reservoir is hovering just below this threshold temperature.

On July 31st, NOAA issued its 2020 Biological Opinion and the U.S. Army Corps of Engineers, Bonneville Power Administration and Bureau of Reclamation published their CRSO Final Environmental Impact Statement (FEIS). Despite four years in the making and a cost of tens of millions of dollars, these documents fail to move beyond a costly and inadequate status quo. They leave critically endangered Columbia-Snake salmon and steelhead on the brink of extinction.

The FEIS and BiOp were ordered by the U.S. District Court in Portland in 2016 when it invalidated the agencies’ 2014 plan for Columbia-Snake River Basin salmon. They follow five previous management plans (BiOps) that also have been rejected by the courts as illegal because they did not adequately protect salmon.

The 8,000-page FEIS considers five salmon/dam management alternatives, including one that would restore the lower Snake River by removing its four federal dams. Its ‘Preferred Alternative’, however, rejects this option in favor of spilling a modest amount of water over eight dams on the lower Snake and Columbia rivers - a measure that has been widely acknowledged as an interim, stop-gap approach.

Based on the FEIS, the Biological Opinion seeks to lock in ‘flexible spill’ as a long-term program that will neither protect nor recover imperiled fish populations. If left in place as-is, this 15-year federal plan will fail endangered Columbia-Snake River salmon and perpetuate high costs and uncertainty for BPA. It will also likely lead to renewed litigation.

An effective solution for salmon and people must move beyond historic conflicts, bring people together and proactively address four urgent, connected issues:

With the release of the FEIS and 2020 BiOp, salmon advocates are calling on Northwest policymakers, sovereigns and stakeholders to work urgently together to craft a solution that meets the needs of both salmon and people.

Seattle Times: Snake River dams will not be removed to save salmon (July 31, 2020)

National Resources Defense Council: Our Rivers Are Too Dam Hot for Salmon (July 29, 2020)