Welcome to Save Our wild Salmon’s Hot Water Report 2020, Week 7. This weekly report presents conditions on the lower Snake and Columbia rivers - like water temperatures, status of salmon and steelhead returns and related topics - via graphs, analyses, and stories. The harmful effects on struggling native fish populations caused by federal dams and their reservoirs is now being exacerbated each year due to warming waters and a changing climate.

We’ll hear from scientists, anglers, guides, and salmon and river advocates about the status of returning adult salmon and steelhead and the challenges facing their rivers. We'll explore opportunities to rebuild abundant, resilient populations, as well as the many benefits they deliver to Northwest culture, economy and ecology.

Historically, abundant Snake and Columbia River salmon and steelhead delivered vast cultural, economic, nutritional and ecological benefits to the people and fish and wildlife of the Pacific Northwest. Today, however, these fish are in crisis - 13 populations in the Basin face extinction - endangering jobs, communities, and wildlife populations. The region’s critically endangered Southern Resident orca, for example, depend mainly on chinook salmon for their diet. As salmon abundance has decreased in Northwest coastal waters - and especially Snake River spring chinook - the orca population has crashed. Just 72 individual whales remain today.

II. READING THE DATA (through August 25) 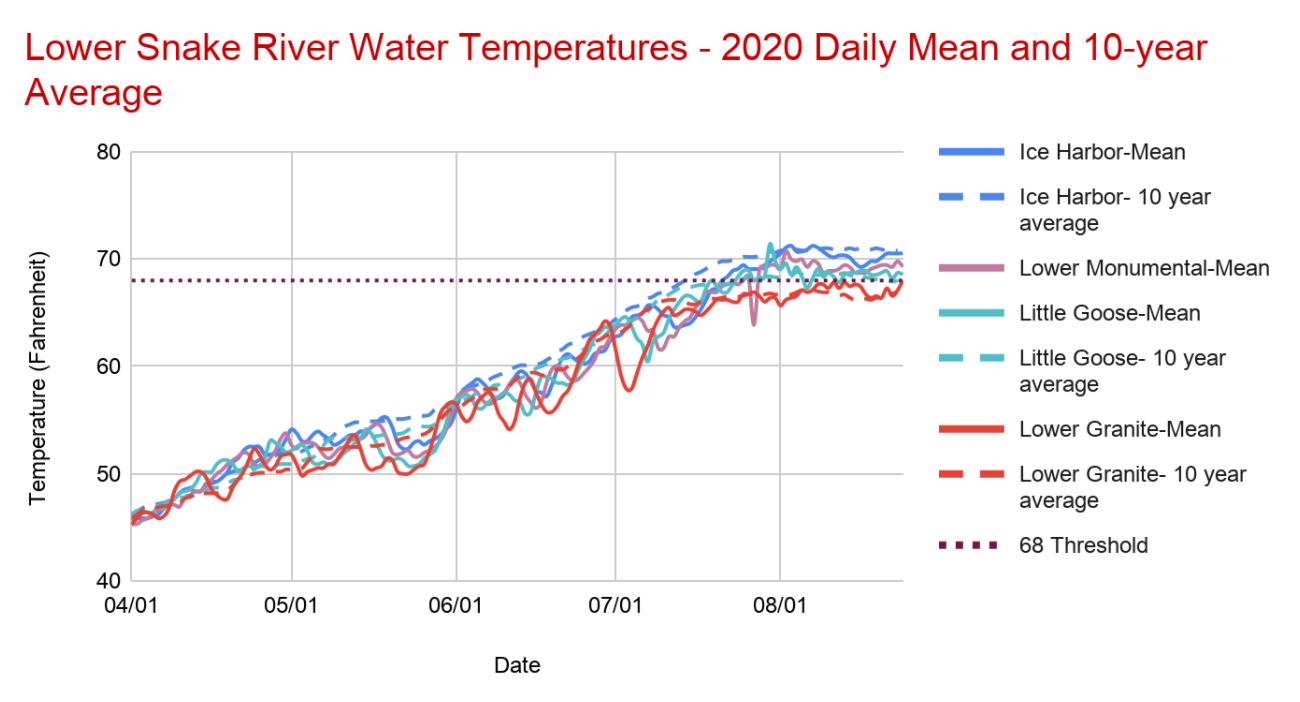 Temperatures in 3 out of the 4 lower Snake River reservoirs are currently above 68°F, however Lower Granite only registered above the threshold twice this week. On August 21st, all of the dams were above 68°F, but 6 out of the 7 days, Lower Granite dam registered just below this threshold. There is less fluctuation this week, which is seen on the graph above. In previous weeks, the temperatures were a couple degrees above the 68°F threshold, but this week those temperatures have decreased slightly. Currently, the temperatures in the reservoirs are generally above the 10-year average for this time of year. We expect the current temperatures reflected in the graph will continue for the next week, and then begin to cool toward the beginning of September. This summer, three of these four reservoirs have exceeded 68°F this summer for at least 34 days. Lower Granite Dam’s reservoir has exceeded 68°F 10 days this summer. 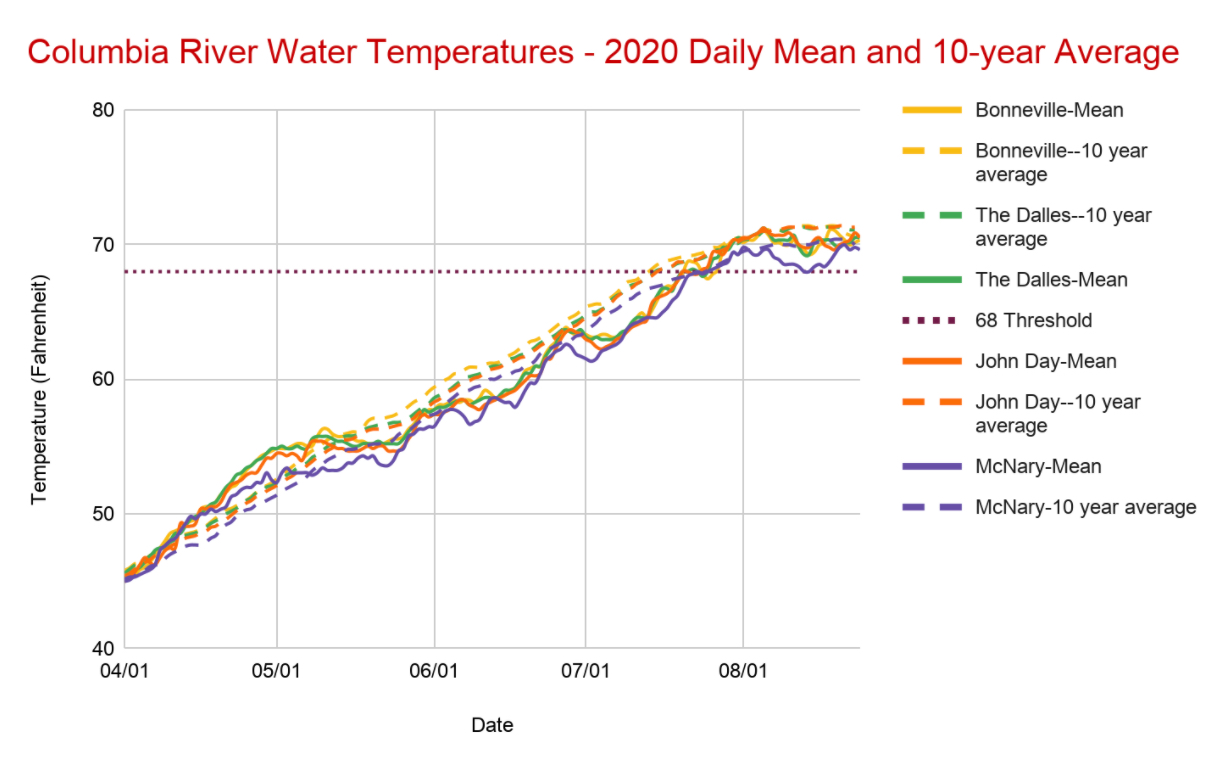 Similar to the lower Snake River dams, temperatures in all four of the lower Columbia River reservoirs have recently flattened out above 68°F. As you can see in the graph above, there is a bit of a plateau about the threshold line. All reservoirs continue to exceed 68°F by one to three degrees; this will probably be the case through the end of August. The Columbia River reservoirs are below the 10-year average for this time of year by at least one degree. All four reservoirs have now exceeded 68°F this summer for at least 35 days.

On the lower Snake River this week, the reservoir created by Ice Harbor Dam registered the highest temperature at 71.24°F - significantly above the level that coldwater fish require. All reservoirs registered above 68°F this week, however Lower Granite dropped below the threshold for the majority of the week.

On the lower Columbia River, the Bonneville Dam registered the highest temperatures this week at 71.42°F. All four of the reservoirs on the Columbia River exceed 68°F as it has been in the last few weeks. 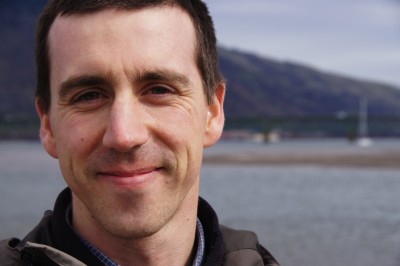 1. Tell us a little bit about yourself, your background and Columbia Riverkeeper. I grew up in Newport, Oregon, where fishing is a staple of the local economy and a crucial part of the community’s identity. At Columbia Riverkeeper, I use scientific data and environmental law to help protect and recover sustainable commercial, sport, and subsistence fisheries throughout the Columbia River basin. I'm dedicated to protecting water quality and restoring healthy rivers so that I can someday teach my 2-year-old son to catch, clean, and cook salmon. 2. Can you help us understand what the connection is between hot water and the federal hydro-system on the Snake and Columbia rivers? It's simple, really. The dams on the Lower Snake slow down and spread out the water so the river soaks up more of the sun's energy. Think about leaving a kiddie pool full of water out in the sun all day. 3. Hot water in the reservoirs created by the federal dams on the lower Snake River and lower Columbia river have long been recognized as a big problem for the survival and reproduction and recovery of endangered coldwater fish like salmon and steelhead. Can you talk about the federal government’s treatment of this critical issue through the years since it was first focused on as a problem in the 1990s? The federal agencies have done very little to meaningfully address this issue over the last 30 years. That's because the best, and possibly only, remedy for the temperature problems in the lower Snake River is removing its four dams. In 2015, more than 250,000 adult sockeye died when the rivers got too hot because of the dams and climate change. This was an unprecedented die-off. It focused more attention on the temperature issue, but since then, agencies like the Army Corps have taken few concrete steps to keep the dams from heating up the rivers and killing salmon. 4. So the issues of hot water created by the federal hydro-system and the problems it creates for the Northwest’s native fish has long been ignored by the federal government. But that has started to change - at least by the states of Oregon and Washington. Can you talk about what has happened recently? What’s driving this change? And how does it connect to efforts by Save Our wild Salmon, Columbia Riverkeeper and many others to restore a free flowing lower Snake River? It has been great to see Governor Inslee (WA) and Governor Brown (OR) step up to protect salmon, and the orcas and fisheries that depend on them, from hot water caused by the dams. The states are, for the first time ever, using their authority under the Clean Water Act to require the Army Corps to reduce the dams' temperature pollution. But the Army Corps is resisting the states' efforts, which is why it's so important for federal elected leaders in the Pacific Northwest to step in and deliver regional solutions. We especially need to restore the lower Snake River to protect fish from hot water and other impacts, but we also need a comprehensive investment package in energy, transportation, and agricultural systems that currently rely on the modest and replaceable benefits provided by these four aging federal dams. 5. What can we expect in the next 6-12 months on these issues and processes? And are there specific ways that people can help to get these issues addressed and opportunities realized? The most important thing we can all do right now is continue asking our state Governors and federal elected leaders to come together around a plan that removes the lower Snake dams and re-invests in nearby river communities. Columbia Riverkeeper and our allies will continue using the Clean Water Act to require reductions in the dams' temperature pollution, but our best opportunity to restore the lower Snake River is through federal legislation--which will only happen if people across the Northwest speak up for salmon; orcas; cold, clean water; and healthy rivers and habitat.