Welcome to Save Our wild Salmon’s Hot Water Report 2020, Week 6. This weekly report presents conditions on the lower Snake and Columbia rivers - like water temperatures, status of salmon and steelhead returns and related topics - via graphs, analyses, and stories. The harmful effects on struggling native fish populations caused by federal dams and their reservoirs is now being exacerbated each year due to warming waters and a changing climate.

We’ll hear from scientists, fishers, guides, and salmon and river advocates about the status of returning adult salmon and steelhead and the challenges facing their rivers. We'll also explore opportunities to improve their health and begin to rebuild abundant, resilient populations and the many benefits they deliver to Northwest culture, economy and ecology.

II. READING THE DATA (through August 17) 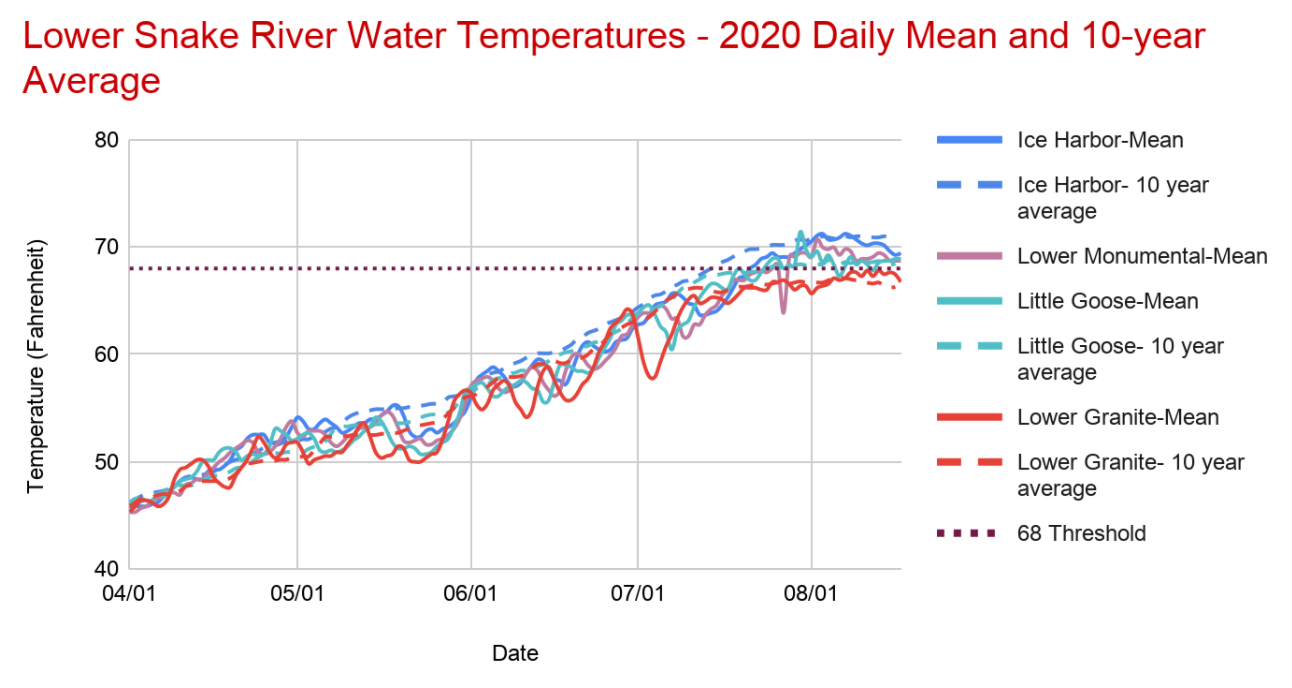 Again this week, temperatures in all four lower Snake River reservoirs are currently above 68°F, however Ice Harbor and Lower Monumental reservoir’s temperatures have decreased from last week. There is immense fluctuation this week just like last week, as you can see when looking at the graph. In previous weeks, the temperatures were a couple degrees above the 68°F threshold, but this week those temperatures have decreased. They are all still above that threshold, but not by as much. Currently, the temperatures in the reservoirs are all pretty much above the 10-year average for this time of year. We expect the current temperatures and fluctuations reflected in the graph will continue for the next week or so, and then begin to cool toward the end of August - which will be welcome news for salmon and other fish species being pushed beyond their temperature limits. Three of these four reservoirs have exceeded 68°F this summer for at least 27 days. Lower Granite’s reservoir has exceeded 68°F 9 days this summer.

More information on the Lower Granite's reservoir: Temperatures in Lower Granite’s reservoir in the summer months are typically slightly cooler than the three downstream reservoirs on the lower Snake due to an influx of cold waters released upstream from the Dworshak reservoir. Dworshak Dam releases cold waters into the Clearwater River that then flows into the Snake River in Lewiston ID. Unfortunately, this cold water mixes in this reservoir and its benefits for fish dissipate here before the waters flow further downstream. EPA models show that a freely flowing lower Snake would carry these cooler waters all the way downstream to its confluence with the Columbia River near the Tri-Cities (WA). 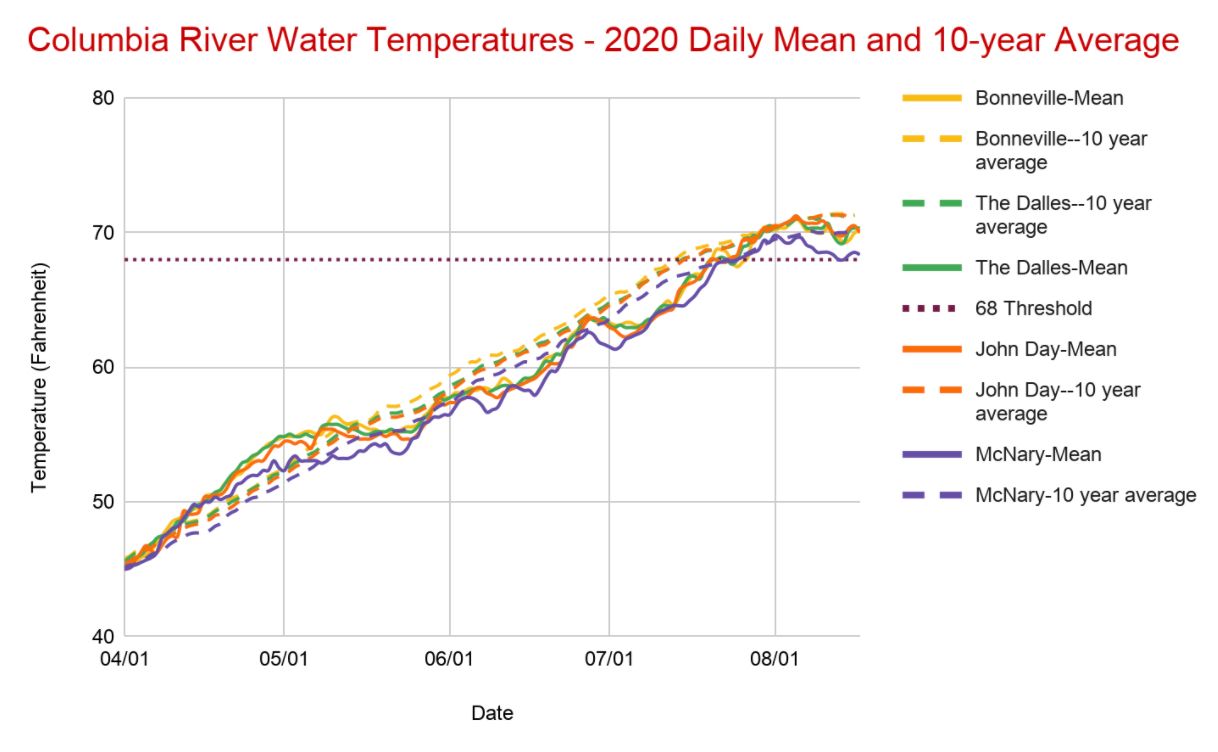 The severe problem for salmon and steelhead survival and recovery created by hot reservoirs in the lower Columbia and lower Snake rivers in summer months has been recognized since at least the 1990s, but federal recovery efforts have consistently failed to address it. The latest federal salmon plan (FEIS and BiOp) - just released on July 31st - repeats these past mistakes.

On the lower Snake River this week, the Ice Harbor Dam registered the highest temperature at 70.52°F - significantly above the level that coldwater fish require. All reservoirs registered above 68°F this week, however Lower Granite dropped below the threshold on August 17th.

On the lower Columbia River, the Dalles Dams registered the highest temperatures this week at 71.06°F. All four of the reservoirs on the Columbia River now exceed 68°F by almost 2°F.