The Hot Water Report is a joint project of the Save Our wild Salmon Coalition, Idaho Conservation League, Columbia Riverkeeper, Friends of the Clearwater, and Washington Sierra Club. 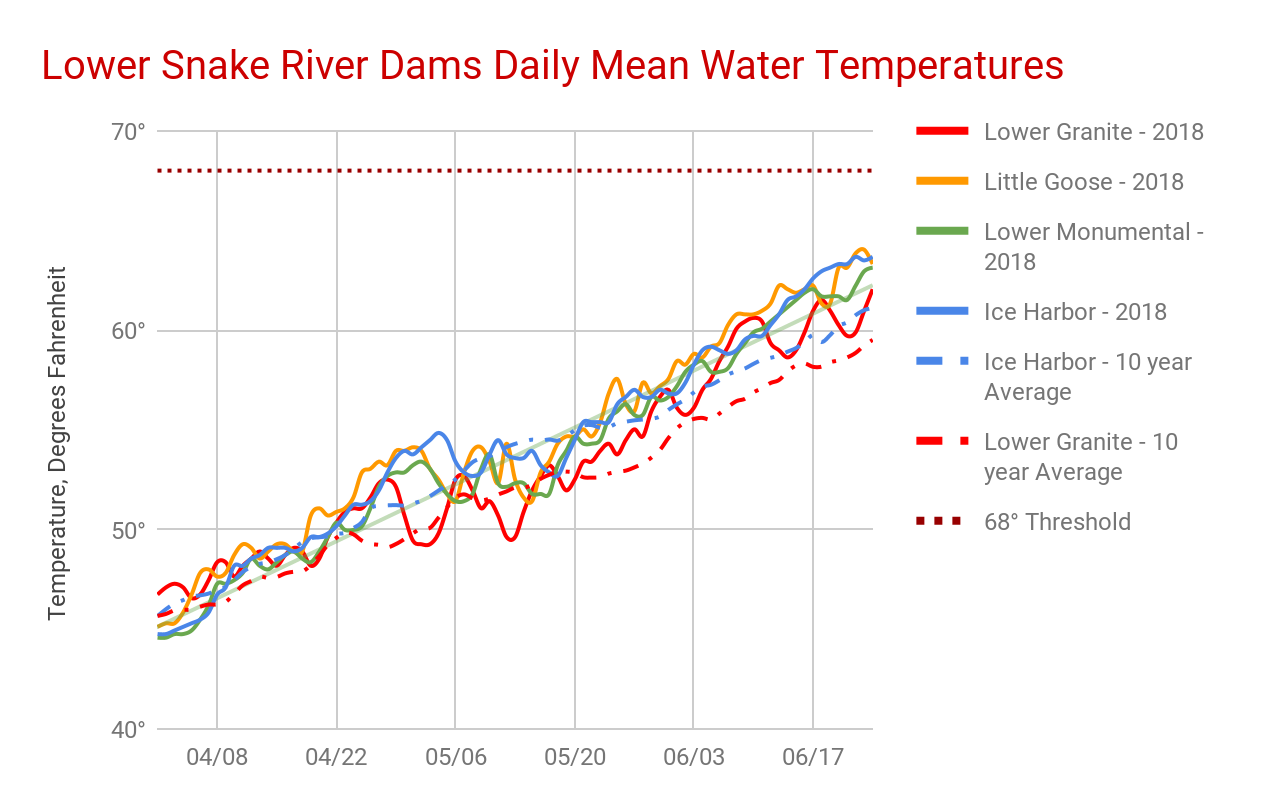 The daily mean temperature at the forebay (upstream reservoir) of each dam is represented in the solid lines, while the 10 year average (2008-2017) for each reservoir is represented by the dashed line of the same color. For this initial report, 10 year historic data was only available for 4 of the 8 dams we will be monitoring. Finally, the dotted line across the top of the graph represents the 68° survival threshold for juvenile salmon. Salmon and steelhead begin to suffer harmful effects when water temperatures exceed 68° Fahrenheit. The longer temperatures remain above 68° and the farther the temperatures rise above 68°, the more severe the effects, including: increased metabolism, increased susceptibility to disease, reduced fecundity or reproductive potential, and/or death.

Note that aside from a dip in early April, this year water temperatures have hovered above the average for the past 10 year. While this past spring has not been as hot as a record year like 2015, temperatures are clearly on the rise, even with relatively high spring flows in the upper portion of the Snake River Basin. Above average spring temperatures have become the norm on the lower Snake River, as the reservoirs created for shipping traffic slow the river to a crawl . A free flowing river is varied and dynamic with pockets of warm and cold water that fish navigate between as they rest, hunt, or travel. A reservoir, however spreads water temperatures uniformly across the whole of its length, eliminating those cold water refuges that make up a healthy salmon habitat. Along the whole 320 miles of slackwater from Bonneville Dam to Heller Bar on the Snake River, where the river flows free once again, there are precious few pockets of cold water. As global climate change continues to push regional temperatures higher and reduce snowpack below the 44th parallel, we can expect this migration route for salmon to go from perilous to impossible. 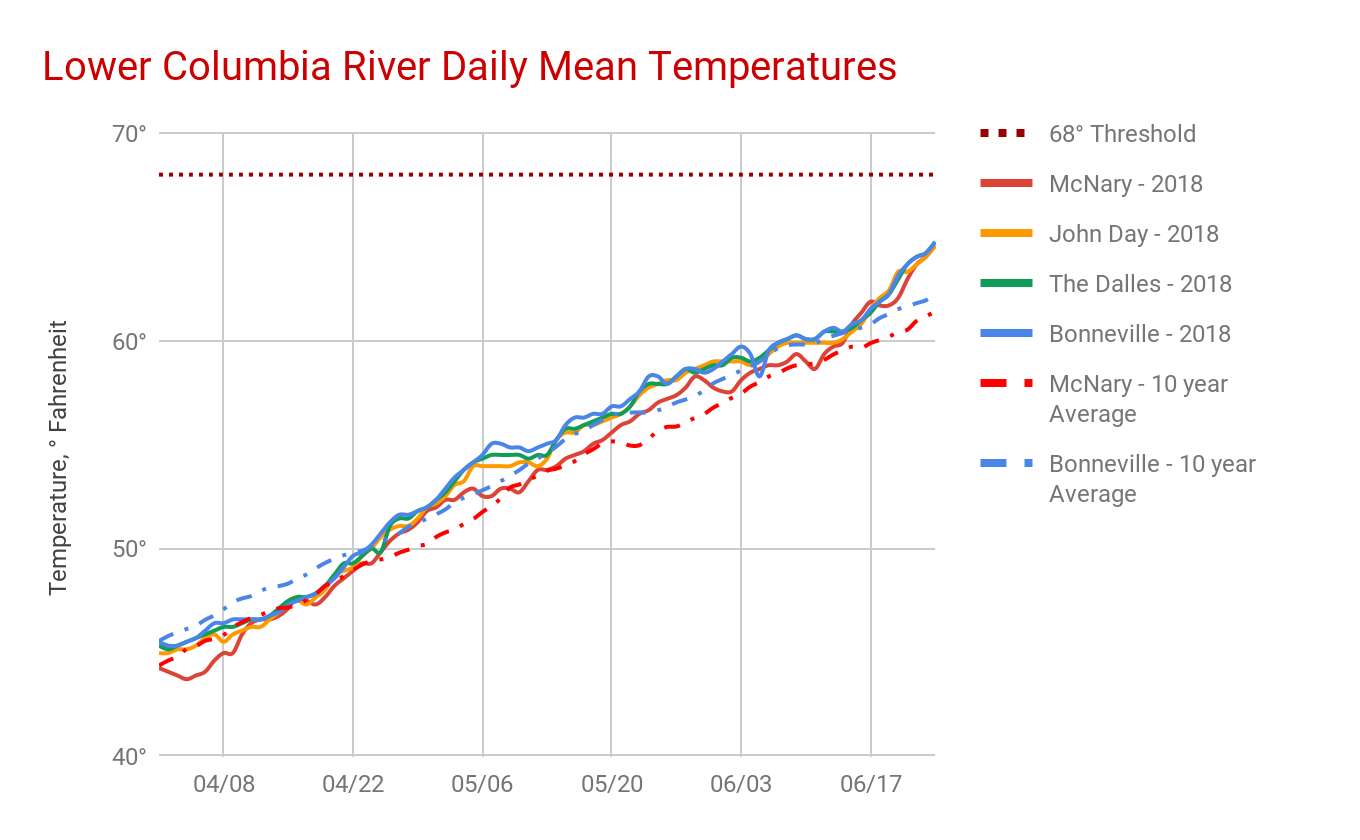 The lower Columbia shows considerably less fluctuation as it has a higher volume, lower grade, and a more temperate climate than the lower Snake. Taking a look at climate data, studies show that over the past 30 years the Inland Northwest has experienced as much as 3 times the warming that the Pacific coast has (see ST article in links below). While a large swath of the Snake River basin received less snow than average, the upper Columbia basin had enough snow to cause extreme and prolonged flooding along the Okanogan, Pend Oreille, and Clark Fork Rivers. Yet despite the good snow conditions, temperatures still remained above the ten year average for much of the spring. As we officially enter the summer season, the mainstem Columbia river is already only 2° below the survival threshold for juvenile salmon. 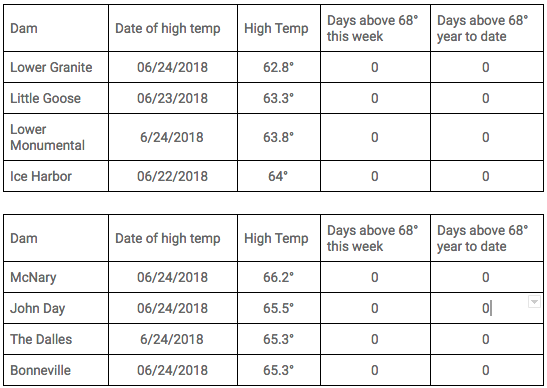 Ice Harbor Dam registered the highest instantaneous temperature on the Snake River this week at 64° with McNary Dam just downstream registering the high for the Columbia at 66.2°. 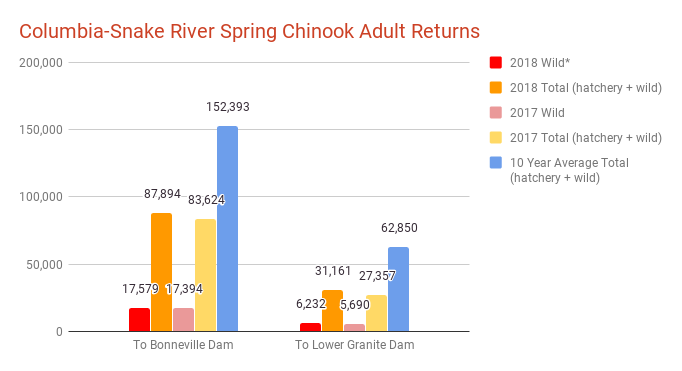 We are in the midst of the transition between what gets counted as a “Spring Chinook” and what gets counted as a “Summer Chinook.” While these two varieties of Chinook salmon are grouped together under the Endangered Species Act, they are counted separately and so we will be looking at them separately in these reports. It is crucial that in looking at the data we recognize that wild salmon make up a smaller portion of the total return every year, with hatchery origin fish constituting over 80% of the run in some years.

Chinook, or King salmon, are the largest of the salmonid species and are thus prized by both commercial and sport fishers in addition to being the primary food species of the critically endangered Southern Resident Killer Whales. Chinook spend between one and seven years in the ocean and are caught as far away as the waters of northern Japan before returning to freshwater to spawn. Being larger than other salmon, Chinook spawn in larger rivers, as opposed to other species that seek small tributaries and lakes, meaning that their offspring must survive in the hot temperatures documented above. As the first major salmon run of the year, Spring Chinook hold special significance to northwest tribes for their First Salmon Ceremony as well as for fisheries scientists who see them as an indicator of the effects of river and ocean conditions for other species later on.

Looking now to the graph, note a slight increase in adult spring returns this year over 2017. However, within the context of the past ten years, this is little cause for optimism. Runs remain well below average and even below what was forecasted for 2018, forcing sporadic fishing closures along the Columbia throughout the spring (see links below). High water levels across the basin may be responsible for a delayed Chinook run, meaning that the summer count could make up for some of these low spring returns, but even the highest estimates are well below the 2008-2017 average.

Seattle Times: Washington warmed slowest of all states over past 30 years — but what does it mean for climate change?