From the desk of Jacob Schmidt: Faith leaders meet with McMorris Rodgers office to oppose HR 3144 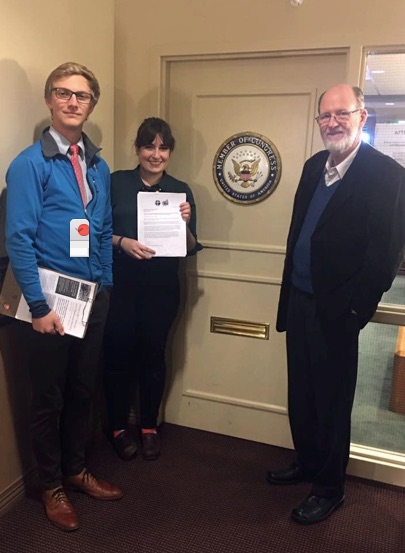 On Monday, November 27, a group of faith leaders met with Rep. Cathy McMorris-Rodgers’ office to ask her to withdraw her bill HR 3144.

The message from religious leaders in Eastern Washington expressed that, “the Earth is a sacred gift given to us by God. In exchange for this life-giving and sustaining bounty, we have an obligation to care for the Earth and the people who depend on it. We believe we have a mandate to protect our wild salmon, defend the livelihood of commercial and sport fishing families, as well as farming families.” HR 3144 would defy these obligations by codifying an illegal management plan for the Lower Snake and Columbia River dams and requiring an act of Congress to make any changes to that plan. The low returns of wild fish this year have shown that Snake River salmon don’t have time for inadequate and wasteful plans.

Earth Ministry Outreach Coordinator Leda Zakarison, former Salem Lutheran pastor Tom Soeldner and I delivered 40 letters from faith leaders in Washington’s 5th district. We were introduced to Colin, a staff member who took time out of responding to Net Neutrality and Tax Reform calls to hear our concerns about HR 3144. We may have made a convert of Colin after Leda explained her understanding of the Christian obligation to steward the Earth, a sentiment which Colin shared. I left him with a fact sheet on the dismal 2017 wild salmon returns.

Giving a message to Cathy McMorris Rodgers that voters from her district are concerned about this bill is important as the new year approaches. December is the season for last ditch bills to be passed before the holiday and January brings must-pass budget bills, both of which present opportunities for H.R. 3144 to be added on as a rider.

As important as letting Representative McMorris-Rodgers know that the faith community cares about wild salmon and fishing families, is informing the faith community about the current threats to wild salmon. This letter is another stepping stone in the process of involving a larger and more diverse sector of the Eastern Washington faith community in the conversation surrounding the Lower Snake River. This conversation will continue throughout the winter and spring in the form of community gatherings and conversations among people of faith and salmon stakeholders, including tribal members who are promised salmon under Treaties.

The letter represents a diverse group of pastors and parishioners from across Eastern Washington, with members of Leda’s own Pullman-based farming family joining members of my own church, Salem Lutheran, a Whitworth University theologian, and many others, to declare their opposition to this salmon-killing bill. Signers included pastors who daily care for and weekly preach to thousands of people. Many of these faith leaders added their own comments to their personal letters, including one curate from Moses Lake who himself is a supporter of Rep. McMorris-Rodgers.

A similar letter is being circulated in the Idaho faith community. If you are a person of faith from Idaho or know someone who is, follow this link and share it with your friends: http://earthministry.org/help-protect-wild-salmon-in-idaho/