This is the first in a five-part series by SOS and American Rivers spotlighting the ecological and community benefits associated with previously completed dam removal/river restoration projects in the Pacific Northwest and beyond.

Restoring the Rogue River: The removal of Savage Rapids Dam
By Isabella Bledsoe 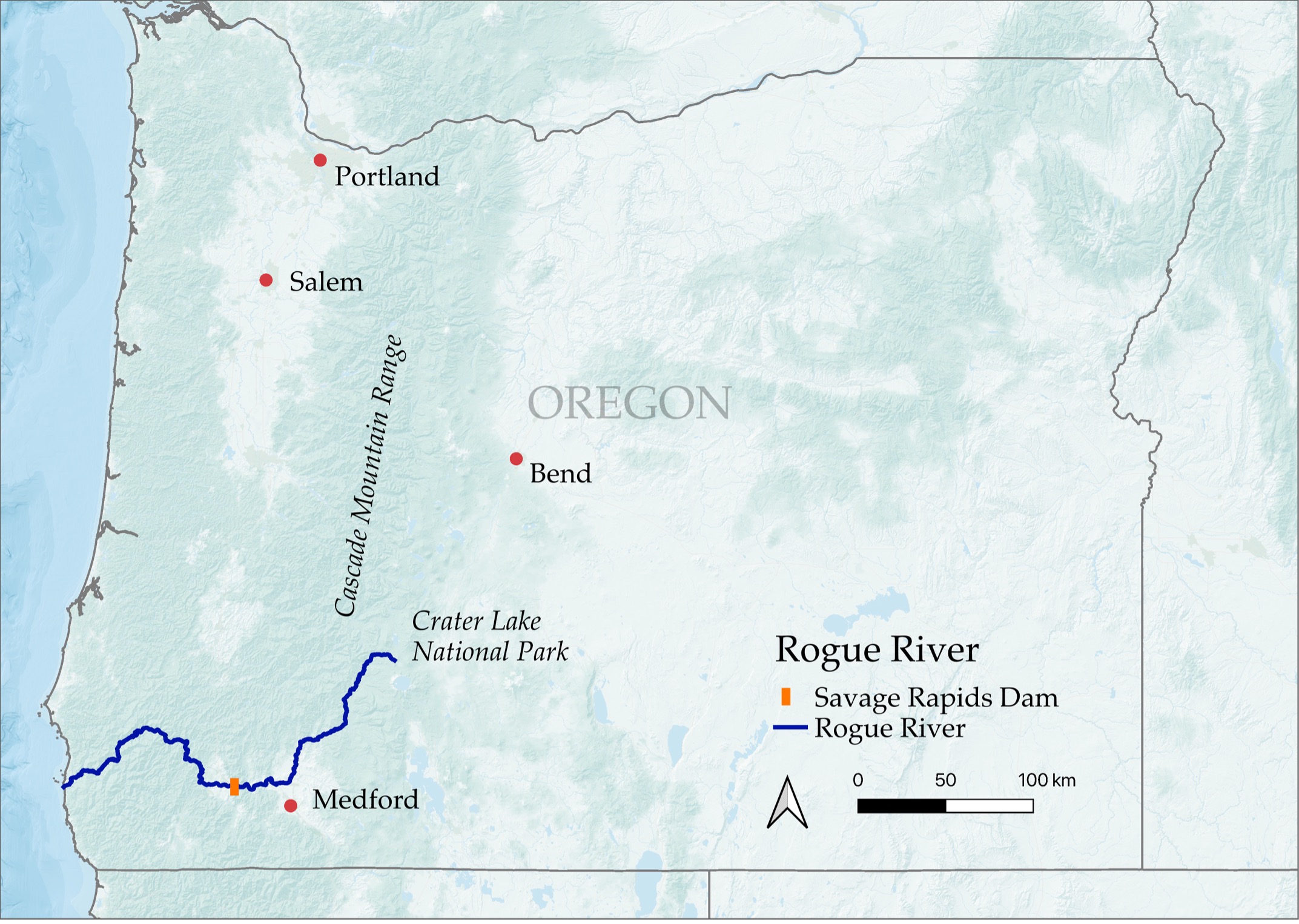 The Rogue River is located in southwestern Oregon and flows from Mt. Mazama in Crater Lake National Park to the Pacific Ocean at Gold Beach, Oregon. The river provides extensive habitat for Chinook salmon, Coho salmon, steelhead, green sturgeon, cutthroat trout, and Pacific lamprey. Like many rivers across the United States, dams were built on the Rogue River to provide irrigation, hydraulic mining, and electricity and drinking water for nearby towns. Yet, along with these services, dams also frequently fragment river ecosystems and disrupt access by native fishes to their ancestral spawning habitat. In an effort to restore the river system, multiple dams on the Rogue have been removed over the past fifteen years, including the focus of this case: Savage Rapids Dam. So far, dam removal and modification projects have restored and reconnected 157 miles of free-flowing river in the Rogue River basin. According to John DeVoe, executive director of WaterWatch of Oregon, “[i]t is estimated that these dam removal projects will greatly improve salmon and steelhead returns and provide millions of dollars in economic benefits to local communities each year.”

Savage Rapids Dam was built in 1921 by the Grants Pass Irrigation District (GPID) to divert water from the Rogue River for irrigation. The dam was 39 feet tall and 465 feet long. From its inception, Savage Rapids Dam created fish passage problems and interrupted salmon migration. In an effort to mitigate these harmful impacts, a fish ladder was built on the dam to allow passage for fish – but the dam’s pump-turbine system and irrigation diversions were installed without fish screens, sweeping juvenile salmon into irrigation canals. According to reports, “one farmer scooped hundreds of salmon out of his fields.” Though screens were later installed, as were other improvements, screening and passage issues remained and unsustainable fish mortality continued.

In 1987, because of large inefficiencies in its irrigation system, GPID applied for expanded water rights that would allow it to withdraw additional water from the river. WaterWatch challenged the proposal to expand water use. A 1990 settlement between WaterWatch, GPID, and Oregon allowed GPID to continue, temporarily, its existing water use, if GPID studied water conservation and fish passage alternatives, including dam removal. At this same time, many organizations began advocating to remove Savage Rapids Dam, viewing it as the only long-term solution for solving fish passage issues. American Rivers named the Rogue to its annual America’s Most Endangered Rivers® list multiple times, because of the threat of outdated dams. In 2001, after years of lengthy legal and political battles, GPID agreed to remove Savage Rapids Dam and replace it with a pumping facility that would allow continued irrigation while at the same time greatly improving conditions for salmon survival and recovery. Bob Hunter, a retired attorney from WaterWatch, emphasizes that “[o]ur many successes so far for the Rogue River and its fish and wildlife populations are the result of persistence, patience, partnerships, and people willing to enforce state and federal environmental laws.”

“Our many successes so far for the Rogue River and its fish and wildlife populations are the result of persistence, patience, partnerships, and people willing to enforce state and federal environmental laws.” - Bob Hunter, retired attorney and river advocate

Benefits of River Restoration on the Rogue

It has now been eleven years and dam removal on the Rogue is showing promising results, though the long-term positive effects of dam removal are still unfolding. Scientists tell us that it could take 20 years before we have definitive results of fish population recovery. That said, current trends are encouraging. In the stretch of river that used to be inundated behind Savage Rapids Dam, 91 redds were counted in 2010 and that number more than doubled just three years later. Further, in 2017, the Oregon Department of Fish and Wildlife (ODFW), counted 193 Coho Salmon between July and October by seining the waters near Huntley Park. In 2018, ODFW counted 465 Coho between July and October.

Beyond the ecological benefits, as part of the Savage Rapids Dam removal, a new electric pumping station was built to be operated by GPID. This pumping station, capable of diverting 150 cubic feet of water per second, is more reliable and efficient than the 88-year old, failing diversion system at Savage Rapids Dam. Prior to dam removal, John Thorne, a rancher and orchardist stated, “Most of the time I get water on my days, but there's at least once or twice a month that there's a dry ditch.” He continued, "They had to truck water here to keep that orchard alive; I almost lost it.” The infrastructure investments that accompanied the removal of the Savage Rapids Dam resolved these types of water delivery problems.

Removing dams can create positive economic, community, ecological, and social justice outcomes and has become an increasingly accepted mechanism of river restoration. Bob Hunter emphasizes that "dam removal is one of the most significant types of river restoration that we can do. It allows natural river processes to resume and benefits fish and other aquatic organisms. Its benefits are many and long-lasting."

“Dam removal is one of the most significant types of river restoration that we can do. It allows natural river processes to resume and benefits fish and other aquatic organisms. Its benefits are many and long-lasting"  - Bob Hunter

These benefits must prompt us to invest in the future of the Pacific Northwest and support comprehensive solutions including dam removal and realize the values of fish, justice, clean energy, and a revitalized economy.

Appreciation for the hard work by many...