This is the fourth in a five-part series by SOS and American Rivers spotlighting the ecological and community benefits associated with previously completed dam removal/river restoration projects in the Pacific Northwest and beyond.

Fourth in the Series: Removing Bloede Dam
By Isabella Bledsoe

Location: Patapsco River, Maryland - and the ancestral homelands of the Nanticoke, Piscataway, and Susquehannock. 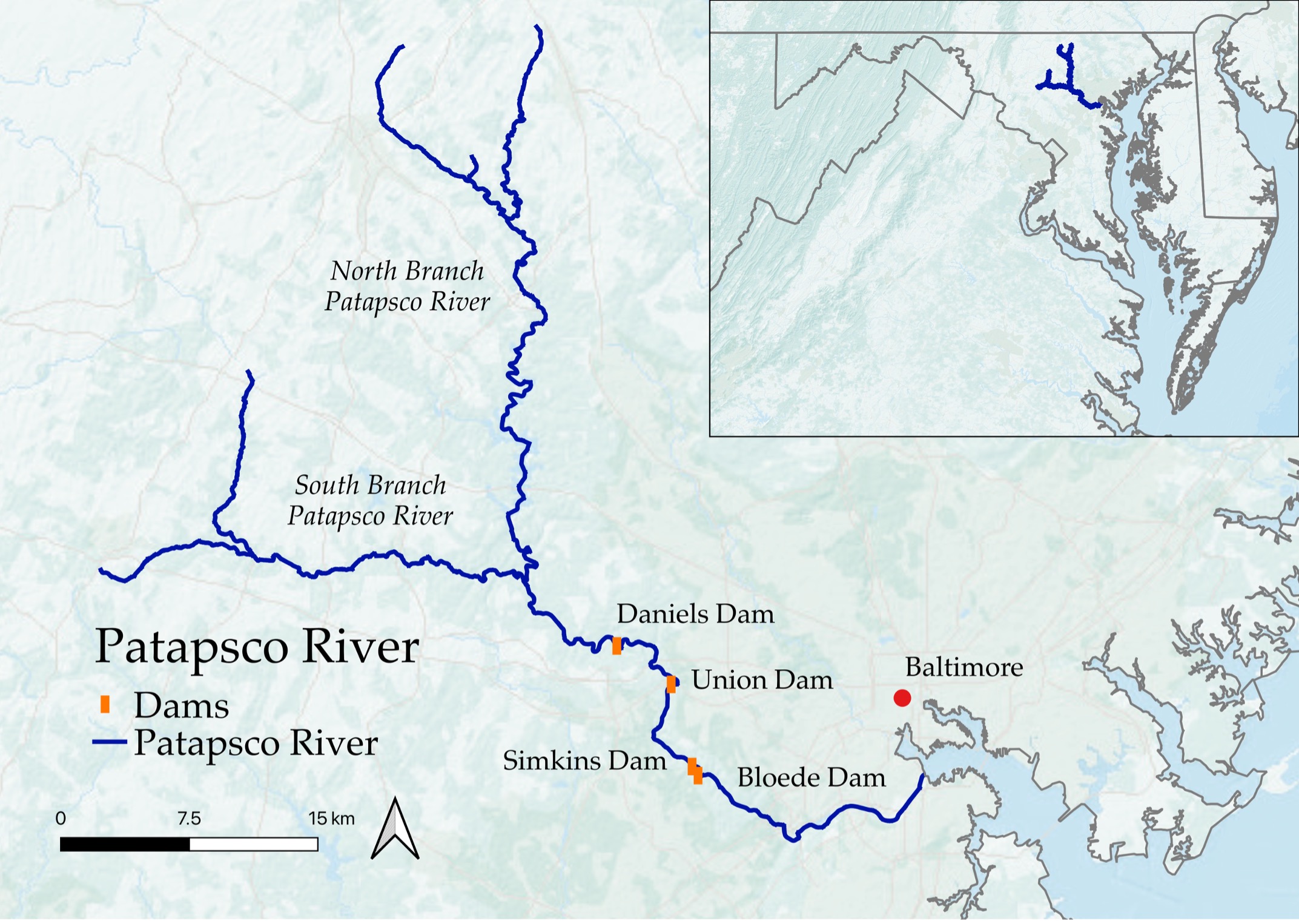 The Patapsco River mainstem is 39 miles long and flows from its headwaters in central Maryland into the Baltimore Harbor. This renowned river system and watershed historically supported thriving fish populations, including American shad, alewife, blueback herring, smallmouth bass, and American eel. Beyond its natural beauty, the Patapsco River also supported the industrial revolution, and dams were built in the early 1900’s along the river system to provide hydropower for nearby industry including iron mills, flour mills, textile factories, and foundries. While dams helped support the booming industry for a time, they also blocked fish species' migratory routes, significantly harming historically abundant fish populations.

Four large dams sat on the Patapsco River; Bloede Dam stood closest to the river mouth, and Simkins Dam, Union Dam, and Daniels Dam all sat upstream. Union Dam was removed in 2010, and Simkins Dam was removed in 2011. The focus of this case study, Bloede Dam, was built in 1906 and, at that time, was the first underwater hydroelectric dam in the world. Given its placement closest to the river’s mouth, the removal of Bloede Dam was essential to comprehensive ecosystem restoration in the Patapsco River watershed. Historically, this dam provided power mainly to towns, including nearby Catonsville and Ellicott City. It stood 34 feet tall and spanned 220 feet wide. The dam’s ownership shifted between multiple electrical utilities, but in 1924 the dam went dormant. In 1938, the Maryland Department of Natural Resources purchased the dam, though it served no functional purpose. Maintaining the structure was extremely expensive--the dam was damaged by Hurricane Agnes, suffered a major flooding event in 1972, and required improvements, including a fish ladder in 1992. Beyond its lack of functionality and expensive upkeep, the dam blocked the river's natural flow, harmed fish populations, and was a public safety hazard.

“Today, we can give Bloede Dam the death sentence that it rightfully deserves. Removing the dam is not a financial option; it is a moral obligation.” - Paul J. Travers, Ranger

After years of ecological damage, federal, state, and non-governmental partners came together (led by American Rivers) to compile the funding needed for dam removal. Bloede Dam was removed in 2018, restoring access to more than 65 miles of spawning habitat for blueback herring, alewife, American shad, hickory shad, and over 183 miles for American eel. At the dam removal initiation, Ranger Paul J. Travers stated, “Today, we can give Bloede Dam the death sentence that it rightfully deserves. Removing the dam is not a financial option; it is a moral obligation.” 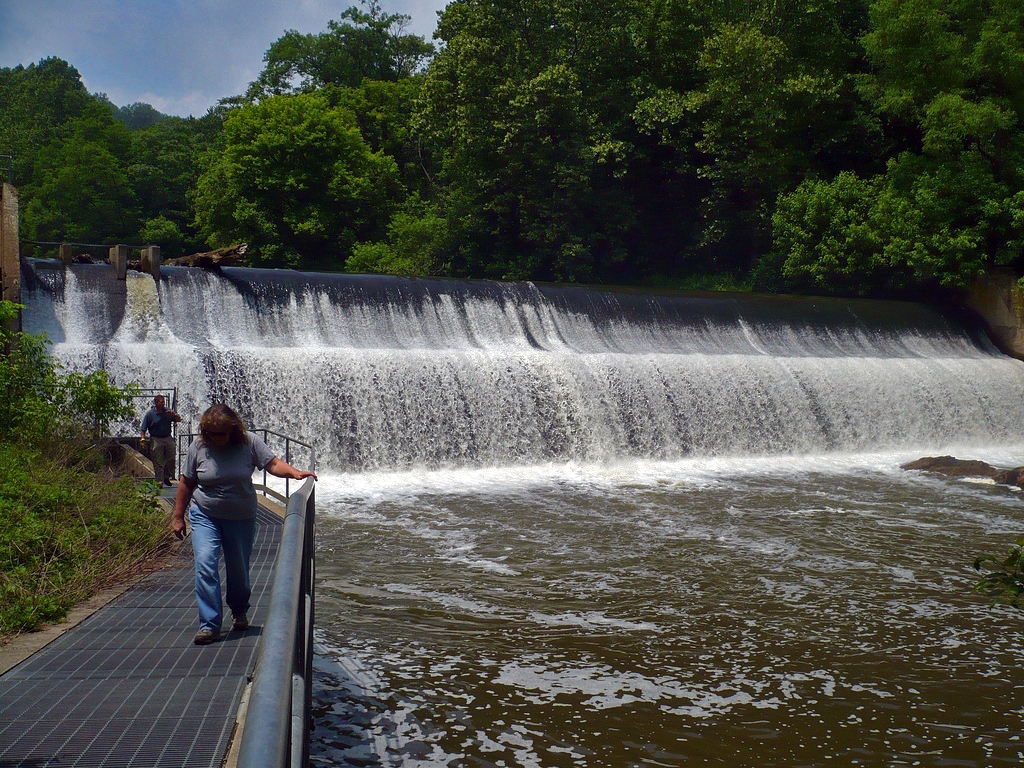 Though Bloede Dam was only removed a few years ago, there are immediate signs of river recovery. Sediment that had built up behind the dam has flushed downstream. In 2020, following the first spring after dam removal, white perch, quillback, and gizzard shad were found upstream of the now-demolished Bloede Dam. Juvenile Striped Bass were also seen upstream. Alewife and blueback herring, jointly known as river herring, are slowly returning as well. These two fish species made up the second-largest fishery in the Chesapeake in the 1930s, but due to unsustainable fishing practices and limited habitat, a fishing moratorium was established in 2011 in Maryland. In 2021, two researchers found an alewife upstream of the previous site of the Bloede dam. “That single fish was able to swim unimpeded from the Atlantic Ocean to that spot in the Patapsco River,” William Harbold, a researcher for the Department of Natural Resources, said. “That’s something that hasn’t been possible for well over 100 years, maybe longer. It’s quite possible that we were the first people to see a wild, freely migrating herring in that part of the Patapsco in over a century. I personally think that’s pretty cool.”

"It’s quite possible that we were the first people to see a wild, freely migrating herring in that part of the Patapsco in over a century. I personally think that’s pretty cool.” - William Harbold, Department of Natural Resources Researcher

Beyond signs of ecological recovery, removing Bloede Dam has expanded recreational opportunities and removed a major public safety hazard. Before dam removal, Bloede Dam sat within the Patapsco Valley State Park and created dangerous currents, contributing to injuries and ultimately to nine dam-related deaths before 1980, and a more recent one in 2015. With the dam removed, hikers, anglers, campers, and kayakers frequently enjoy the beautiful river, oak-hickory forests, and steep valley sides from the 16,000-acre state park. Visitors to the Patapsco Valley State Park can fish near the former dam impoundment, and families can safely explore riverside trails.

“The Patapsco River is free, after years of hard work by so many. It’s wonderful to see the Patapsco rushing back to life, and to watch park visitors discover and enjoy the free-flowing river,” said Serena McClain, project manager and director of River Restoration for American Rivers. “This major river restoration project would not have happened without the collaboration and dedication of many public and private partners. This success is proof that when we come together, we can accomplish great victories for our rivers and our communities that will resonate for generations to come.”

“Completion of this project means improved safety for our park visitors, restoration of the Patapsco River System, and healthier habitats for aquatic species – all of which are important to our department.” - Jeannie Haddaway-Riccio, Secretary for the Maryland Department of Natural Resources

Removing dams can create positive economic, community, ecological, and social justice outcomes and has become an increasingly accepted river restoration mechanism. “Removal of the Bloede Dam has been a long-term priority for both public safety and environmental reasons, so the department is very grateful for the strong partnerships that have finally made it a reality,” Maryland Department of Natural Resources Secretary Jeannie Haddaway-Riccio said. “Completion of this project means improved safety for our park visitors, restoration of the Patapsco River System, and healthier habitats for aquatic species – all of which are important to our department.” It is exactly these types of benefits that inspire SOS and its supporters to advocate for a comprehensive regional solution, including lower Snake River dam removal, as a tremendous investment opportunity in the Pacific Northwest for tribal and non-tribal communities, its endangered fish and whales, clean energy, and a revitalized economy.

The successes on the Patapsco River would not have been possible without the work of groups and individuals, including American Rivers, Friends of the Patapsco Valley State Park, the Maryland Department of Natural Resources, Maryland Department of Transportation State, the National Oceanic and Atmospheric Administration, U.S. Fish and Wildlife Service, U.S. Geological Survey, Maryland Biological Stream Survey, Maryland Geological Survey, University of Maryland Baltimore County, National Fish and Wildlife Foundation, Coca Cola Foundation, Keurig-Green Mountain, and many others.