This is part of a five-part series by SOS and American Rivers spotlighting the ecological and community benefits associated with previously completed dam removal/river restoration projects in the Pacific Northwest and beyond.

Fifth and Final in the Series: Restoring Sandy River
By Isabella Bledsoe 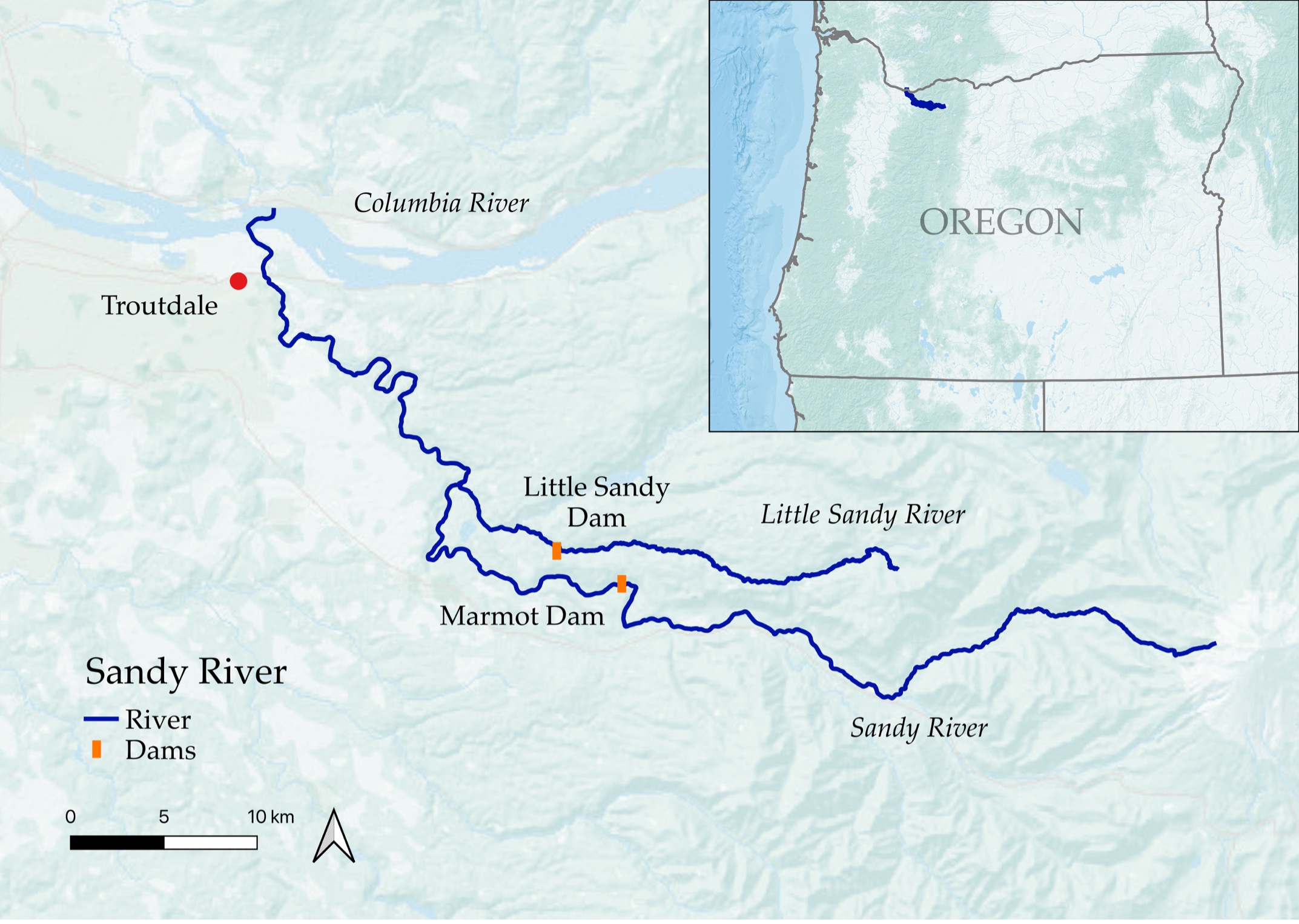 The Sandy River is 56 miles long and flows from its headwaters high on the slopes of Mt. Hood into the Columbia River near Troutdale, Oregon. The Sandy River and its tributaries provide essential habitat for coho salmon, chinook salmon, steelhead trout, cutthroat trout, and rainbow trout. However, this river system was disrupted when Portland General Electric (PGE) completed the Bull Run Hydropower complex in 1913. This complex included the Marmot Dam on the Sandy River, the Little Sandy Dam on the Little Sandy River, and an intricate system of tunnels and canals used to route water to a remote powerhouse. Marmot dam diverted water into the Little Sandy River and to the Little Sandy Dam; the Little Sandy dam fed a storage reservoir, Roslyn Lake, and a powerhouse. The Marmot and Little Sandy Dams generated electricity for the city of Portland and powered a trolley line that brought residents to Roslyn Lake for boating and swimming. Although the dams produced valuable electricity, they significantly harmed coho salmon, chinook salmon, and steelhead trout populations and blocked access to approximately 280 miles of excellent habitat upstream.

Marmot Dam was 47 feet tall, 350 feet wide, and constructed 30 miles upstream from its confluence with the Columbia River. The Little Sandy Dam was 16 feet tall. These dams severed and disrupted the hydrologic system in the watershed, ultimately contributing to the addition of winter steelhead, spring chinook, and coho salmon to the Endangered Species Act. 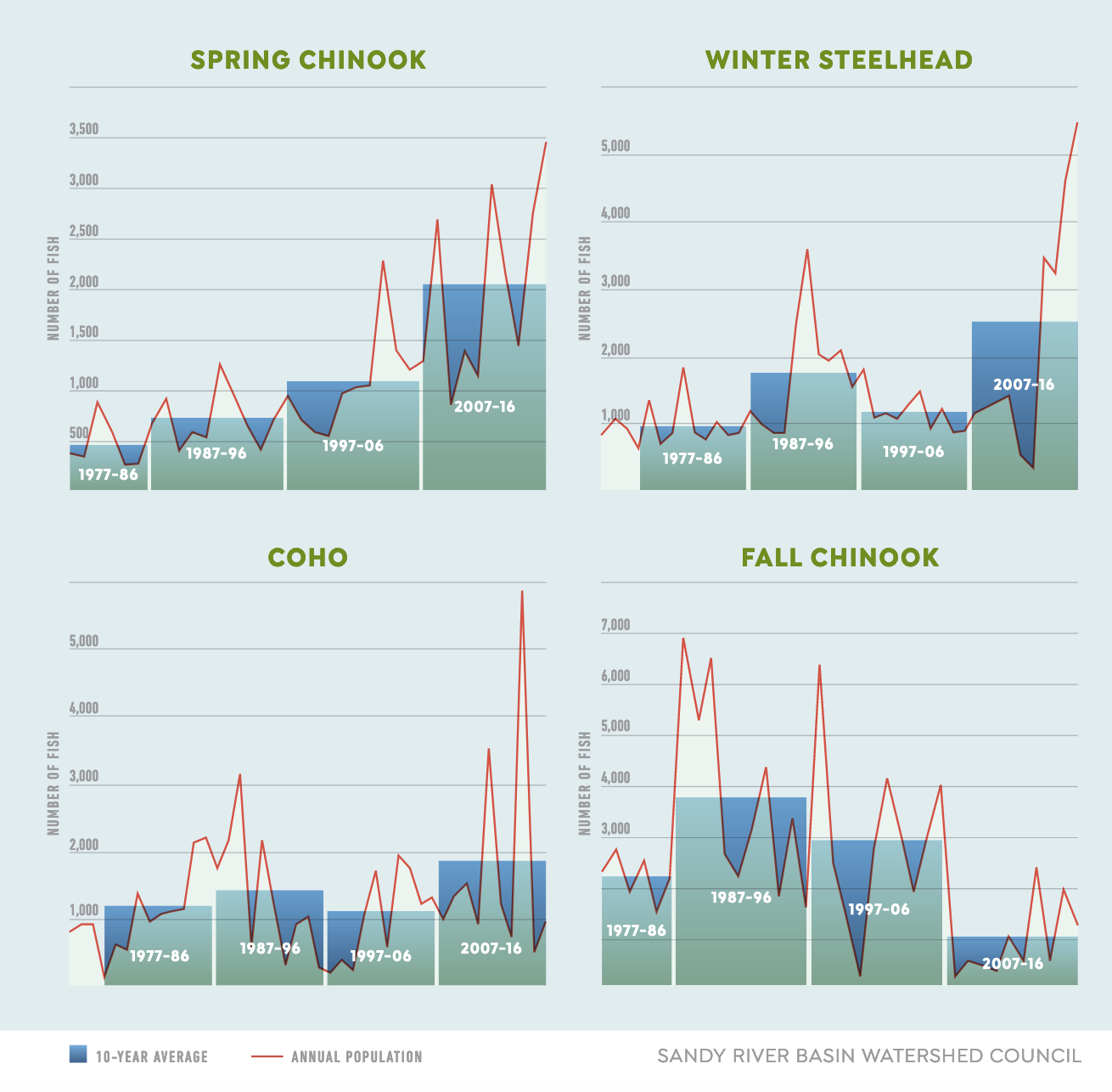 Many hydroelectric dams across the nation were built in the early 1900s. Licenses for these dams are typically issued for 30 to 50 year periods, and when they expire, dam owners must decide whether to renew their licenses and make upgrades to comply with new environmental regulations. In the late 1990s, PGE needed to renew the federal license for the Bull Run complex and face new requirements to comply with the Endangered Species Act, including constructing fish passage infrastructure.

In the process of negotiating a new license, PGE realized that it would be required to install a fish ladder to help adult fish return upstream and to develop an improved means for moving migrating juveniles downstream. Given the costs of the required infrastructure, in 1999, PGE decided to remove the Marmot and Little Sandy Dams. Collaboratively, multiple agencies and conservation groups began planning for dam removal. In the end, PGE agreed to remove the dams, transfer water rights to the state, donate approximately 1,500 acres of land to public ownership, and invest in watershed restoration. Marmot Dam was removed from the Sandy River in 2007, and the Little Sandy Dam was removed from the Little Sandy River in 2008.

The Bull Run Hydropower complex was removed over 10 years ago, and the Sandy River today is showing clear signs of an ecological recovery-in-progress. Crews monitor the Sandy annually to count adult salmon and steelhead carcasses and redds (in-river “nests”) and use these metrics to assemble fish counts. According to a recent Sandy River Basin Watershed Council report, spring chinook, winter steelhead, and coho all show increases in 10-year average populations, particularly in the second generation of adult fish returns, after dam removal. Fall chinook have unfortunately continued to decline for reasons that are not well understood at this time. 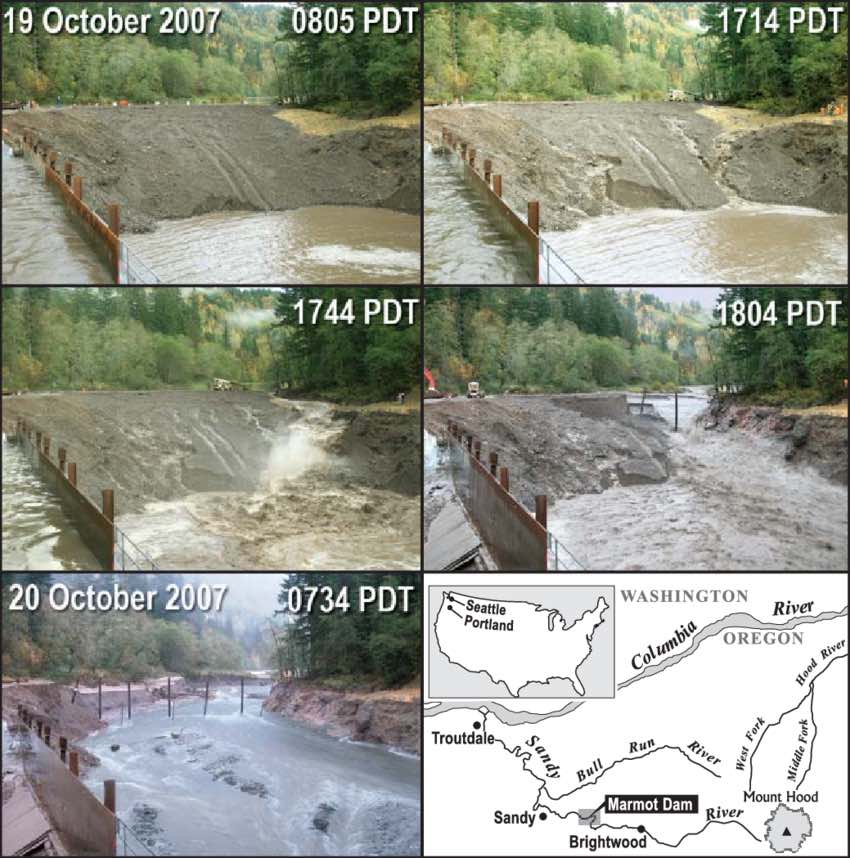 Click here to watch the NGS time-lapse video of the Marmot Dam removal!

Dam removal has also united many community members by bringing stakeholders together to collaborate on restoration and stewardship efforts in the watershed. Environmental organizations and local citizens are working on extensive invasive species removal and are replanting native trees, shrubs, and other plants. Additionally, the Confederated Tribes of Grand Ronde provided $30,000 to support restoration work in the Sandy River basin. This grant is being used by The Freshwater Trust (TFT) to add boulders and large wood structures to the river system that will help develop pool habitat and refuge for salmonids, open new side channels on the Salmon River, and generally improve habitat to aid in native fish recovery. Sandy River restoration has brought nonprofits, government, tribes, educational institutions, and private funders together to work towards the common goal of a healthy watershed and healthy and abundant native fish populations.

“We celebrate the future of a watershed that will provide unimpeded salmon and steelhead passage from the slopes of Mt. Hood to the Pacific Ocean.” - Peggy Fowler, CEO and President of Portland General Electric

Removing dams can create positive economic, community, ecological, and social justice outcomes and has become an increasingly accepted river restoration mechanism. “We celebrate the future of a watershed that will provide unimpeded salmon and steelhead passage from the slopes of Mt. Hood to the Pacific Ocean,” stated Peggy Fowler, the CEO and President of PGE. It is these kinds of benefits that lie at the heart of SOS’ mission and drive our work on the ground Restoring rivers and reconnecting watersheds is a valuable investment in the Pacific Northwest and its indigenous people, its fish and whales, and injustice, clean energy, and communities and economy.