6 books about the Pacific Northwest for 6 (randomly-selected) year-end SOS donors. 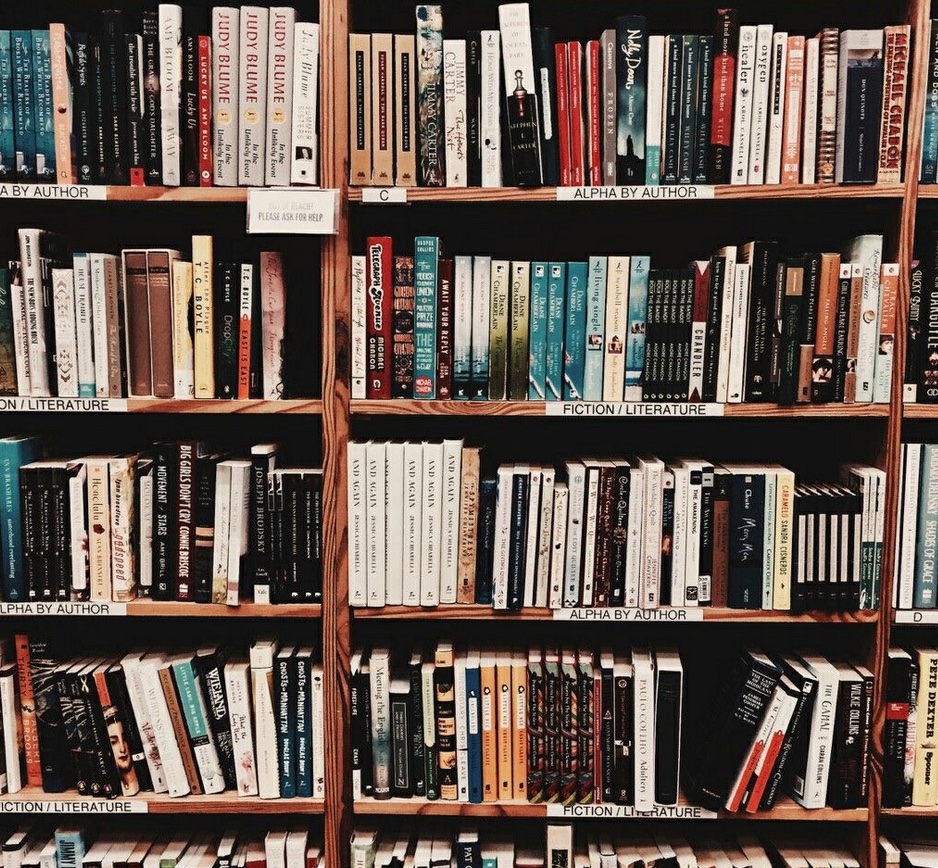 As part of our 2022 year-end fundraising, we choose six noteworthy books to give to six randomly-selected year-end SOS donors.

Our motivation for this give-away was two-fold.

First, we wanted to gift these books to a set of year-end donors to make our year-end fundraising push a little more interesting and – in a small way – express our deep appreciation for the generosity and support for our work. Our success at SOS depends significantly on people like you and so many others in our broader community of partners and allies. Your advocacy for wild salmon and steelhead and their rivers and streams - and your financial contributions - allow us to do the work we do, and we are very grateful.

SOS is well known as a lean organization that punches well above our weight. SOS is a smart investment in support of healthier, more resilient and more just lands and waters, fish and wildlife, and communities and cultures across the Pacific Northwest.

Second, these are some of our team’s favorite books that we've read recently (when we have time to read!) – and we wanted to bring them to your attention in case your bedside stack is getting low and you're looking for some excellent reading material centered on the natural history, human history, and contemporary culture of the Pacific Northwest. 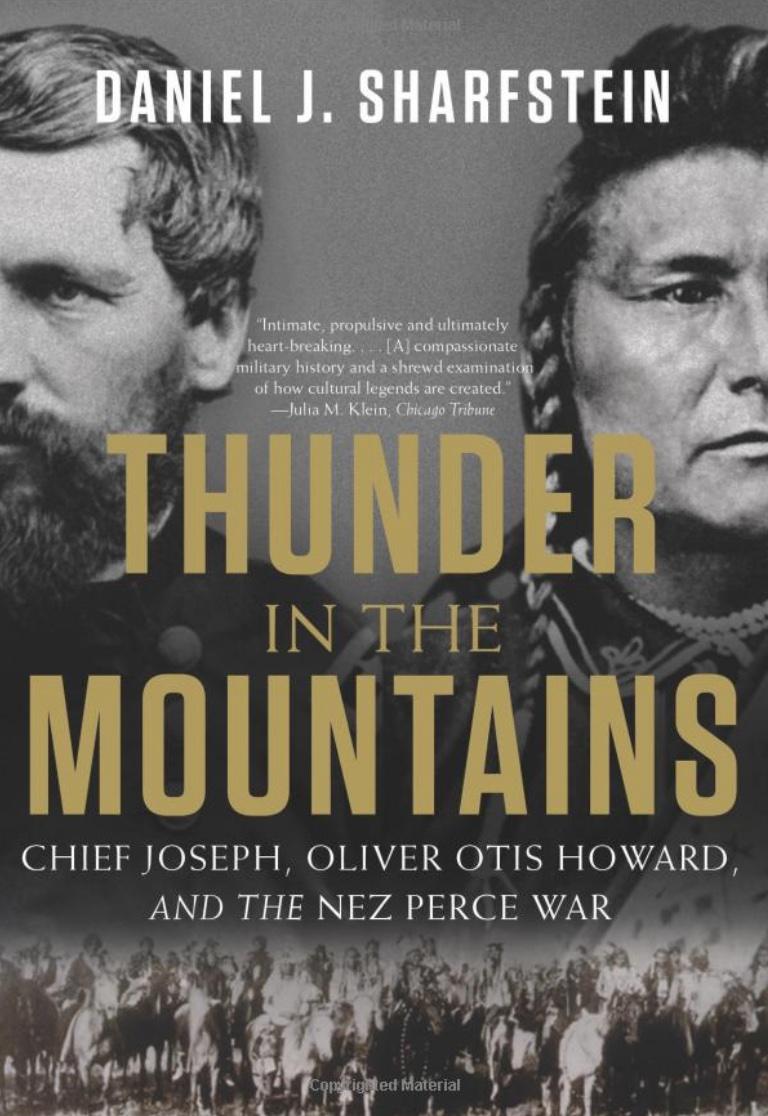 I. Thunder in the Mountains: Chief Joseph, Oliver Otis Howard, and the Nez Perce War (2017).
By Daniel J. Sharfstein

After the Civil War and Reconstruction, a new struggle raged in the Northern Rockies. In the summer of 1877, General Oliver Otis Howard, a champion of African American civil rights, ruthlessly pursued hundreds of Nez Perce families who resisted moving onto a reservation. Standing in his way was Chief Joseph, a young leader who never stopped advocating for Native American sovereignty and equal rights. Thunder in the Mountains is the spellbinding story of two legendary figures and their epic clash of ideas about the meaning of freedom and the role of government in American life. 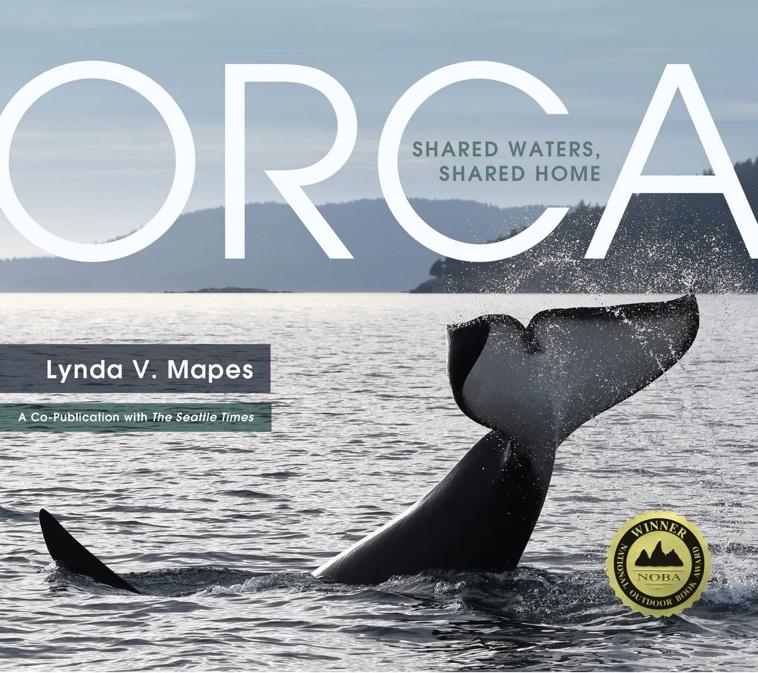 Orca whale J35, also known as "Tahlequah," gave birth in July of 2018 in the waters off British Columbia, but her calf died soon after, leading its mother to carry her for 17 days across 1,000 miles before finally releasing the calf and rejoining her pod. This extraordinary and caring behavior sparked not only worldwide sympathy, but also a revival of our awareness of the critical need to preserve orcas, the chinook salmon they feed on, and their habitat that together make up the core of Pacific Northwest identity.

In Orca: Shared Waters, Shared Home journalist Lynda V. Mapes explores the natural history of the orca and the unique challenges for the survival of the Southern Resident group that frequents Puget Sound. These whales are among the most urban in the world, a focus of researchers, tourists, and politicians alike. Once referred to as "blackfish" and still known as "killer whales," orcas were for generations regarded as vermin to be avoided or exterminated, then later were captured live for aquariums all over the world. With greater exposure, scientists realized how intelligent the mammal is and are learning about their matriarchal family groups, vocalizations, behavior, and different subspecies. Today only 73 Southern Resident whales are left, and they are threatened by habitat degradation, lack of chinook salmon (their primary food source), relentless growth, and climate change. Can we reverse the trend?

This special project, co-published with the Pulitzer Prize winning Seattle Times newspaper, features stunning imagery by Times photographer Steve Ringman, as well as from partner organizations, including The Whale Museum, NOAA, and Center for Whale Research. 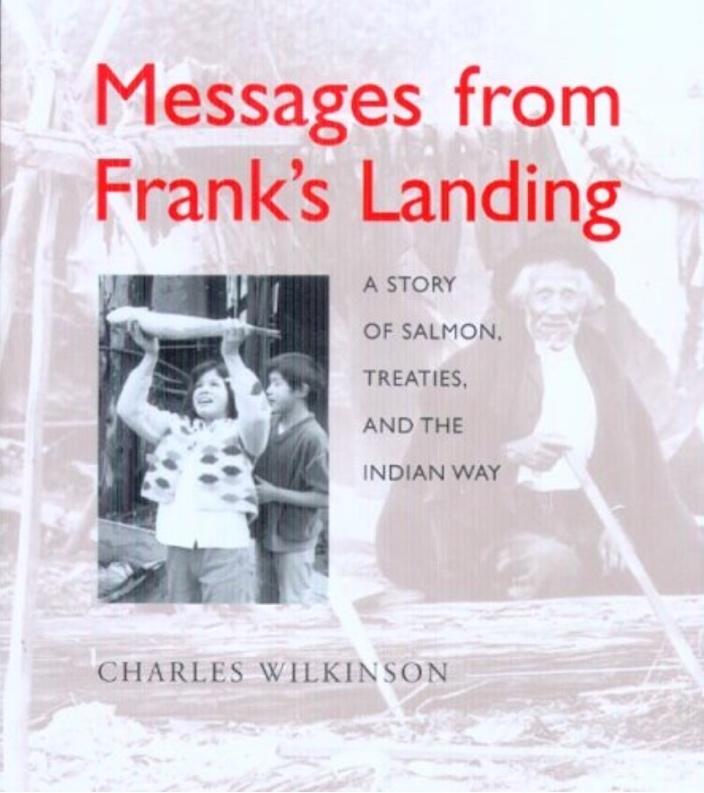 III. Messages from Franks Landing: A story of salmon, treaties, and the Indian way (2006).
By Charles Wilkinson

In 1974 Federal Judge George H. Boldt issued one of the most sweeping rulings in the history of the Pacific Northwest, affirming the treaty rights of Northwest tribal fishermen and allocating to them 50 percent of the harvestable catch of salmon and steelhead. Among the tribal members testifying in Judge Boldt’s courtroom were Nisqually tribal leader Billy Frank, Jr., and his 95-year-old father, whose six acres along the Nisqually River, known as Frank’s Landing, had been targeted for years by state game wardens in the so-called Fish Wars.

By the 1960s, the Landing had become a focal point for the assertion of tribal treaty rights in the Northwest. It also lay at the moral center of the tribal sovereignty movement nationally. The confrontations at the Landing hit the news and caught the conscience of many. Like the schoolhouse steps at Little Rock, or the bridge at Selma, Frank’s Landing came to signify a threshold for change, and Billy Frank, Jr., became a leading architect of consensus, a role he continued to play throughout his life - as one of the most colorful and accomplished figures in the modern history of the Pacific Northwest.

In Messages from Frank’s Landing, Charles Wilkinson explores the broad historical, legal, and social context of Indian fishing rights in the Pacific Northwest, providing a dramatic account of the people and issues involved. He draws on his own decades of experience as a lawyer working with Native people, and focuses throughout on Billy Frank and the river flowing past Frank’s Landing. In all aspects of Frank’s life as an activist, from legal settlements negotiated over salmon habitats destroyed by hydroelectric plants, to successful negotiations with the U.S. Army for environmental protection of tribal lands, Wilkinson points up the significance of the traditional Indigenous worldview - the powerful and direct legacy of Frank’s father, conveyed through generations of Native people who have crafted a practical working philosophy and a way of life. Drawing on many hours spent talking and laughing with Billy Frank while canoeing the Nisqually watershed, Wilkinson conveys words of respect and responsibility for the earth we inhabit and for the diverse communities the world encompasses. These are the messages from Frank’s Landing. Wilkinson brings welcome clarity to complex legal issues, deepening our insight into a turbulent period in the political and environmental history of the Northwest. 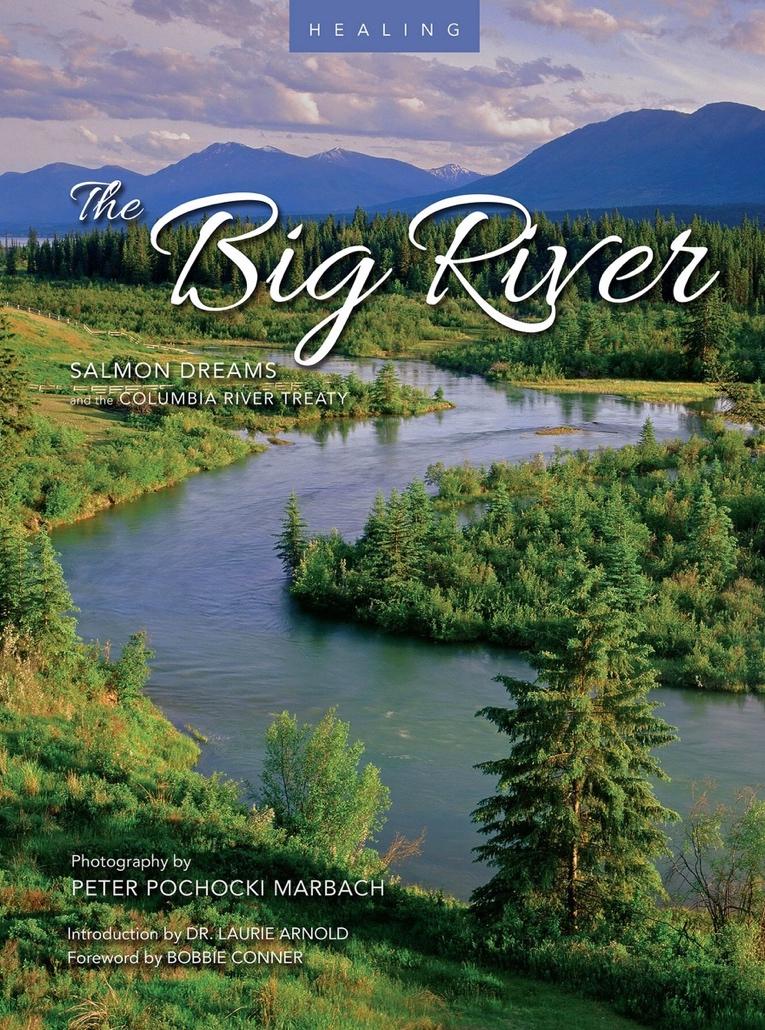 Healing the Big River masterfully combines the art of visual storytelling with passionate essays. From the source, a tiny spring in the Canadian Rockies, to the sea, readers are guided on a journey back to the origins of the 1,243 mile river and learn about the complicated history and impact of the Columbia River Treaty. The twelve contributing authors, a mix of first nations, tribes, and salmon recovery advocates speak of their relationship to the Columbia and advocate for a new treaty that honors Indigenous knowledge and starts the process to restore one of the greatest salmon runs the world has ever seen.

“Since time immemorial, the history of Oregon has been deeply connected with the history of the Columbia. The remarkable photographer, Peter Marbach, has devoted much of his career to capturing the astounding beauty of the mighty river. In “Healing the Big River…”, Peter’s imagery, combined with compelling essays from individuals concerned about the river’s future, provides us a unique window into this critical moment in the history of the Columbia.”
—Kerry Tymchuk, Executive Director, Oregon Historical Society 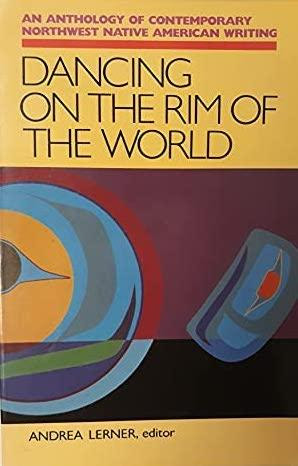 V. Dancing on the Rim of the World: An Anthology of Contemporary Northwest Native American Writing (1990).
By Andrea Lerner (Editor).

This first anthology devoted to Native American writings from the Pacific Northwest gathers the work of thirty-four artists who testify to the vibrancy of its native cultures. The 137 selections--prose as well as poetry--represent works of such well-known authors as James Welch, Duane Niatum, and Mary TallMountain, and also showcase many lesser-known writers at the start of their careers. 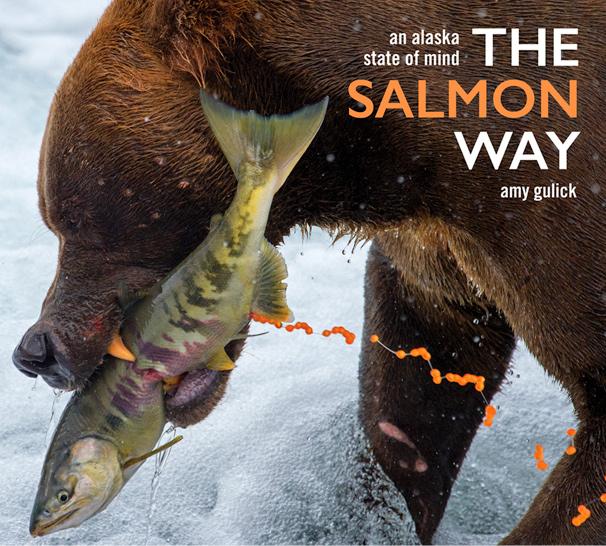 VI. The Salmon Way: An Alaska State of Mind (2019).
Signed by the author, Amy Gulick

Alaskans have deeply personal relationships with their salmon. These remarkable fish provide a fundamental source of food, livelihood, and identity, and connect generations and communities throughout the state. Yet while salmon are integral to the lives of many Alaskans, the habitat they need to thrive is increasingly at risk from large-scale development that threatens both the fish and valued ways of life.

As communities wrestle with how best to ensure that both salmon and people prosper in today’s world, it is clear that Alaskans are united in their desire for their salmon relationships to continue. Forever.

Intrigued that there is still a place in the world where the lives of people and wild salmon are inextricably linked, writer and photographer Amy Gulick ventured to Alaska to explore the web of human relationships that revolve around these extraordinary fish. Commercial fishermen took her on as crew; Alaska Native families taught her the art of preserving fish and culture; and sport fishing guides showed her where to cast her line as well as her mind. Alaskans everywhere, regardless of their wildly different beliefs, shared their salmon riches with her in their kitchens, cabins, and fish camps—it’s the salmon way.

And the lucky book 'winners' are...

Thank you as ever for your tremendous support and advocacy. We are grateful for and humbled by your partnership. Please reach out (joseph@wildsalmon.org; 206-300-1003) if you have questions about our priorities and program work in the coming year, how you can support us, or would like further information and to get more involved.

P.S. – You can make a year-end gift online or you can mail it to our office: