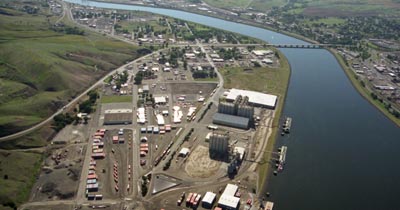 Non-profit environmental law firm Earthjustice, representing Idaho Rivers United, Pacific Federation of Fishermen’s Associations, Institute of Fisheries Resources, Washington Wildlife Federation, Sierra Club and Friends of the Clearwater, filed a complaint with Seattle’s U.S. District Court challenging the Corps’ approval of a $6.7 million lower Snake River dredging project scheduled to begin next month.
.
Dredging behind lower Granite Dam is the centerpiece of the U.S. Army Corps of Engineers Walla Walla district’s ill-advised plan for maintaining the little-used barging corridor between Pasco, Wash., and Lewiston, Idaho. Though shipping on the Columbia River waterway remains robust, traffic on the lower Snake is so low that it qualifies for the Corps’ own “negligible use” project category.

Fishing and conservation groups and the Nez Perce Tribe have challenged the Corps plan because it puts salmon, steelhead, and Pacific lamprey at serious risk, purposefully dodges any real look at alternatives to dredging, and ignores the shaky economic justification for the barge corridor created by the four lower Snake River dams.

Despite thousands of comments noting the plan’s glaring errors and omissions, the Corps last week issued a record of decision adopting the plan. The agency immediately signed a contract with a dredging contractor to begin work December 15.

“The lower Snake waterway exacts an enormous price from taxpayers as well as from wild salmon, steelhead, and Pacific Lamprey”, said Earthjustice attorney Steve Mashuda. “The Corps has failed to look at any alternatives to dredging this winter, and fails to provide an honest assessment of the fiscal and environmental costs involved in shoring up this out-of-date waterway.”

“These four dams are responsible for pushing the Snake River’s wild salmon and steelhead to the edge of extinction.” said SOS executive director Joseph Bogaard. “Climate change and other factors are making the lower Snake River dams ever more deadly to migrating fish while the economic justification for this waterway is slipping away.”

Over the past 15 years, the lower Snake waterway’s freight volume has declined 64 percent as farmers and other shippers move their products to trucks or rail. Maintenance expenses, meanwhile, have surged. Lewiston faces a chronic crisis of sedimentation and U.S. taxpayers now effectively subsidize every barge leaving Lewiston to the tune of about $18,000.

Navigation is the primary purpose of these dams.  They generate significant power primarily in the spring, when power demand and prices are low and the Northwest is awash in hydropower—so much so that wind farms are often forced to shut down.

“This boondoggle is yet another example of how more and more tax dollars are spent to prop up the four outdated dams on the lower Snake River,” said Gary MacFarlane of Friends of the Clearwater.  “Little thought has been given to the long-term economic and environmental consequences of long-term dredging.”