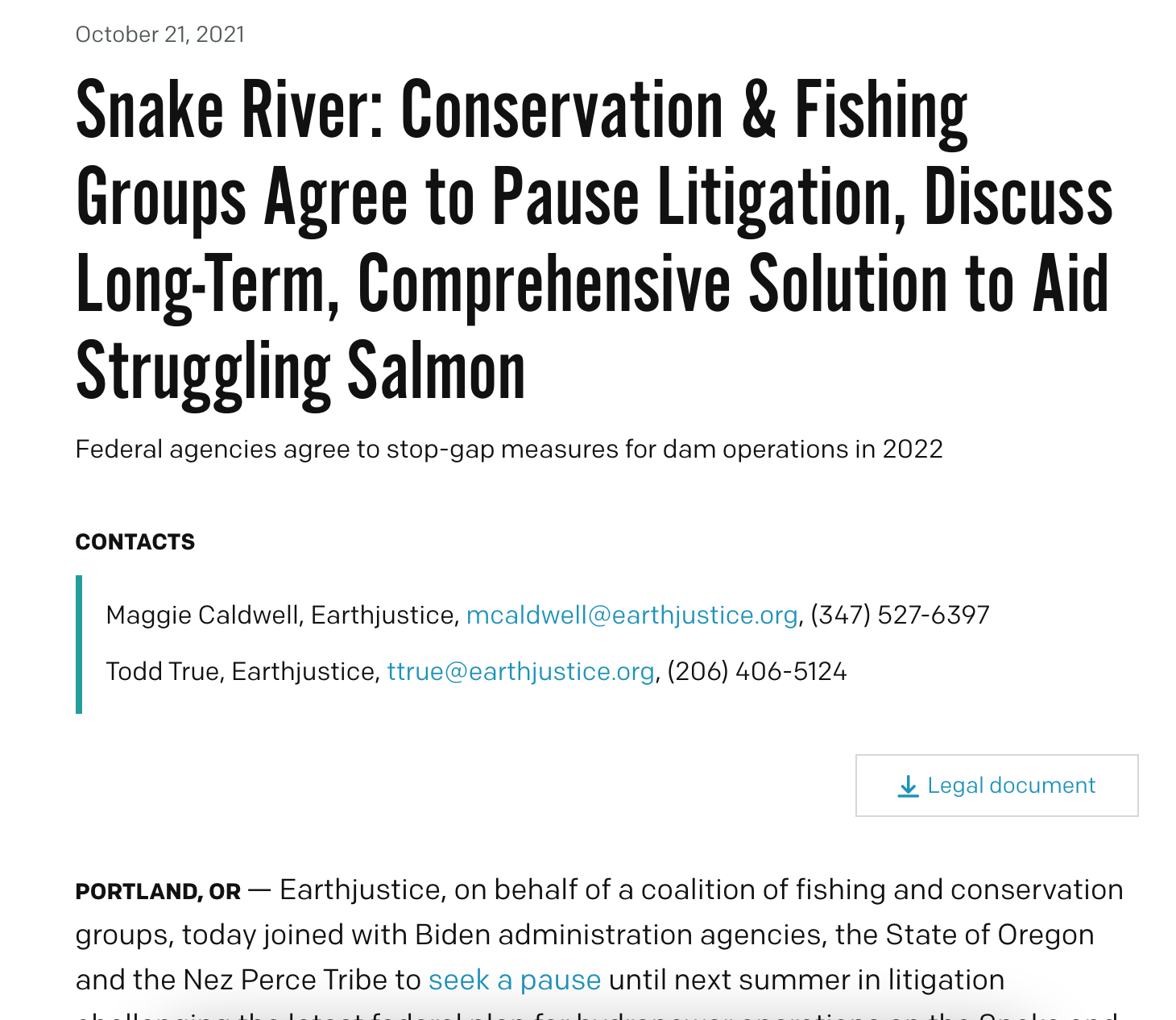 Portland, OR – Earthjustice, on behalf of a coalition of fishing and conservation groups, today joined with Biden administration agencies, the State of Oregon and the Nez Perce Tribe to seek a pause until next summer in litigation challenging the latest federal plan for hydropower operations on the Snake and Columbia Rivers. The request for a stay includes an agreement for specific dam operations in 2022. If the Court grants the stay, these parties have committed to use the time to work together to develop and implement a comprehensive, long-term solution that could resolve the long-running litigation over dam operations in National Wildlife Federation v. National Marine Fisheries Service.

The request submitted to the Court states that it “provide[s] an interim compromise while the Parties work together to develop and begin implementing a long-term comprehensive solution.”

“Columbia River salmon have been essential to this treasured river basin for millennia. Now, the salmon and the people, wildlife, and ecosystems that rely upon them are running out of time. This pause in our decades-running litigation offers the federal government, states, Tribes, and conservation advocates an opportunity to come together and finally find common-ground and enact a comprehensive solution to restore salmon,” said Collin O’Mara, president and CEO of the National Wildlife Federation. “Congressman Mike Simpson has started an important, bipartisan conversation in the region about the future of Northwest salmon and the lower Snake River dams. We appreciate the commitment of the federal government, State of Oregon, Nez Perce Tribe, and the conservation community to work together to comprehensively resolve this long-standing controversy. We look forward to working with these parties, Tribes and other interests to achieve a successful outcome.”

“We must act very quickly because our salmon are headed toward extinction. Snake River steelhead returns this year were the lowest ever recorded and other stocks are not doing much better,” said Liz Hamilton, Executive Director Northwest Sportfishing Industry Association. “We urgently need a real, comprehensive solution that works for all interests and believe these discussions can deliver that result for salmon, and salmon-dependent communities and others. NSIA is committed to making every effort in the coming months to reach that outcome but is ready to go back to court if we have to.”

“Our region is entering a period of unique opportunity to forge a comprehensive solution that works for all, restores the Snake River and its salmon and honors the rights of tribes. This pause in litigation has engaged the leadership of the Biden administration at a time when key Northwest leaders are also putting forward plans like Rep. Simpson’s and initiatives like Senator Murray’s and Governor Inslee’s to take a new path and develop a durable solution,” said Bill Arthur, the Sierra Club’s Snake River Campaign Director.

“This one-year agreement will provide additional protections for endangered salmon and steelhead in 2022, but the fishing and conservation groups know that with the current configuration of the system, this will not be enough for long-term revitalization of the fish,” said Todd True, Earthjustice attorney. “We’ve said all along that what we need to do is restore the lower Snake River, including breaching the four federal dams there, and make other appropriate investments to replace the power and other economic benefits they provide. That’s the kind of solution we’re seeking.”

The Agreement filed with the Court today not only creates an opportunity to develop and implement a comprehensive solution, it also increases, for 2022, the amount of water shifted away from dam turbines starting next spring to help endangered salmon populations navigate the dams in the Columbia and Snake River basins. Increasing “spill,” as it is called, helps juvenile fish avoid the turbines and pass each dam more quickly along their perilous river migration to reach the ocean where they mature. The Agreement also includes other measures to address the harmful effects of dam operations. The conservation and fishing groups recognize, however, that these are emergency, stop-gap measures to afford these species incremental survival benefits. They are not alone enough to prevent the decline of these fish toward extinction.

Fact Sheet: Why the restoration of the lower Snake River is necessary to save wild salmon

Online version of this release

The Columbia River Basin was once the greatest salmon-producing river system in the world. But all remaining salmon on its largest tributary, the Snake River, are now facing extinction. Four aging dams in Washington—Ice Harbor, Little Goose, Lower Monumental, Lower Granite

—block passage along the lower Snake River, a major migration corridor linking pristine cold-water streams in central Idaho to the mighty Columbia River and out to the Pacific Ocean. Scientists say restoring the lower Snake River by taking out these four dams is the single best thing we can do to save the salmon.

Migrating past these dams is a killing field for salmon and steelhead and rising water temperatures caused by the slackwater reservoirs make the passage increasingly deadly. In 2015, some of the earliest and hottest weather on record produced warm river temperatures that killed more than 90% of all adult sockeye salmon returning to the Columbia Basin. In years since, state agencies have had to limit or cancel entire fishing seasons to protect the dwindling fish. This summer with its record-setting heat was a sharp reminder of the increasing potential advancing climate change poses for another generational disaster for Snake River salmon.

The case that all parties agreed to pause today challenged the most recent plan for dam operations issued by the Trump administration in late 2020. That plan green-lighted essentially the same operations the courts have consistently rejected for more than two decades and through a half dozen different failed plans.

Some $17 billion in rate-payer and tax-payer dollars has been spent on the multiple inadequate federal efforts to protect salmon under the previous illegal plans and not one species has recovered.