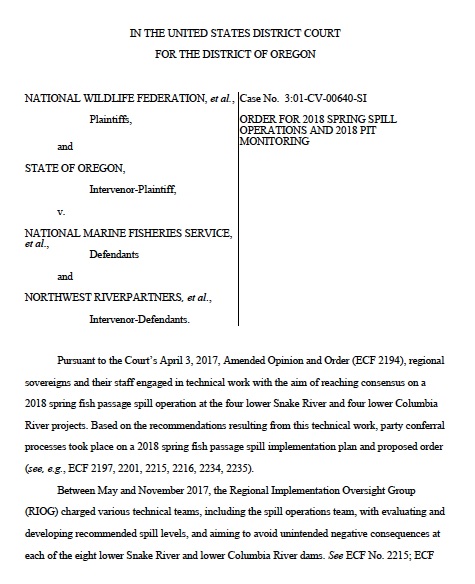 U.S. District Court approves joint federal-state proposal for 2018 spill plan to help juvenile fish migrating past federal dams and reservoirs in the Columbia-Snake River Basin
Increased spill will increase survival and adult salmon and steelhead returns in the years ahead.

This plan for Spring 2018 dam operations was jointly submitted to the Court last month by plaintiffs and defendants in the long-running legal case to protect wild salmon and steelhead in the Columbia Basin. It was developed in response to the Court’s April 2017 Order requiring the U.S. Army Corps of Engineers to provide more voluntary spill (water released through the spillways) to protect salmon and steelhead at risk of extinction.

Todd True, lead attorney for the plaintiffs: “There is no real scientific dispute that voluntary spill to the level required by the Court will avoid harm to juvenile salmon. In addition, this spill order has been carefully crafted to avoid any unintended negative consequences to navigation and other resources. In fact, it is very likely that spill at higher levels would afford additional salmon survival improvements.”

Plaintiffs include conservation organizations, fishing associations, the Nez Perce Tribe and the State of Oregon. Defendants include the Corps of Engineers, Bureau of Reclamation and NOAA Fisheries.

Voluntary spill was first required during the spring and summer months at the eight federal dams in 2006 under the order of Judge James Redden after he had invalidated a plan from the federal agencies in 2004. The new spill plan approved by the Court today requires as much spill as is allowed under current state water quality rules for total dissolved gas (or “TDG”) unless there are compelling reasons to reduce it. Higher levels of spill help juvenile salmon migrating to the ocean in the spring and summer move past the dams more quickly and safely, and results in higher adult returns in the years that follow.

Liz Hamilton, executive director of the Northwest Sportfishing Industry Association: “Increasing the proportion of spill is vital for the protection of salmon and steelhead, and for fishing businesses and communities across the Northwest. This order for additional spill will divert baby salmon away from powerhouses, increasing the survival of juvenile fish migrating past dams to the ocean, enhancing the numbers of adult fish returning in the years that follow.”

Rhett Lawrence, conservation director for the Sierra Club in Oregon: “Increased spill levels in 2018 will provide a much-needed boost for our struggling salmon and steelhead populations. Conservation and fishing groups are grateful for our partnership with Oregon and the Nez Perce Tribe – working together for the Northwest’s iconic fish and holding the federal agencies accountable to the law and the people of the region.”

Joseph Bogaard, executive director of Save Our wild Salmon: “This order for additional spill in 2018 is a near-term life-line for our region’s endangered wild salmon and steelhead until we have a legally valid, science-based plan in place. This order gives our fish and the communities that rely on them some breathing room in 2018 while our region comes together on a long-term plan that improves the health of these rivers and recovers our struggling fish populations.”

Last fall, Washington State also clarified how it applies its water quality standards relating to total dissolved gas in the lower portions of the Snake and Columbia Rivers. This clarification by the state will allow incrementally higher levels of spill to occur in the spring and summer, leading to higher juvenile and adult returns than would have occurred previously.

In May 2016, Judge Simon ruled the federal agencies’ 2014 Columbia Basin Salmon plan is inadequate and illegal. This is the fifth consecutive federal plan (Biological Opinion or “BiOp”) deemed illegal by three different judges across two decades. Over this period, despite the federal agencies spending more than $10B on a series of ineffective, illegal plans to protect salmon and steelhead from a deadly federal hydro-system, not a single at-risk population has recovered.

While the federal agencies jointly submitted this proposed plan with the plaintiffs to increase spill, they also filed an appeal to the 9th Circuit Court of Appeals last fall challenging the court’s decision to further expand spill. The appeal is on an expedited schedule and is expected to be resolved before the official beginning of the juvenile out-migration in early April of 2018.

You can read the signed order requiring more spill from the Court here.