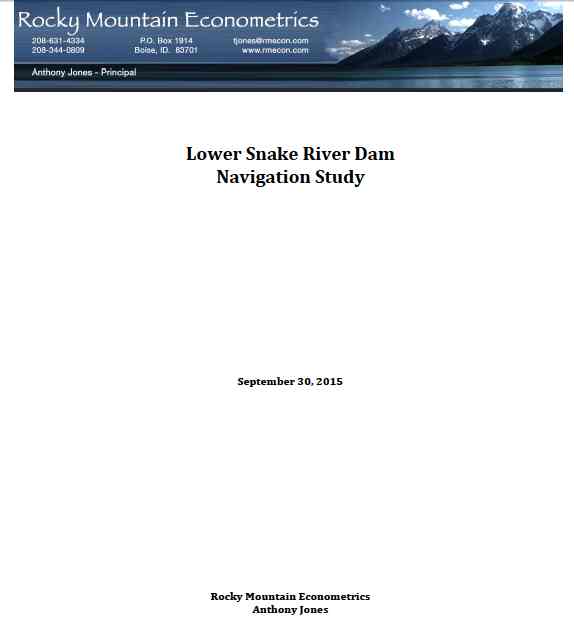 A system of outdated dams and locks on the lower Snake River in eastern Washington state is in continued and serious economic decline, according to two reports released this week by Save Our wild Salmon and Idaho Rivers United.

The reports, authored by economist Anthony Jones of Rocky Mountain Econometrics, look at the dams’ two main benefits or services: flatwater transportation and energy production. Together the reports demonstrate that 1) commercial navigation on the lower Snake River generates less than 50 cents for every dollar spent to provide it and 2) that electricity produced by the dams wouldn’t be missed if it were to vanish from the Northwest power grid tomorrow.

“These reports raise new and serious questions about the economic value and viability of four dams whose costs appear to exceed their benefits,” said Save Our Wild Salmon Inland Northwest Director Sam Mace. “Can our region afford to maintain high cost, low value infrastructure when other valuable projects in the Basin that deliver greater value are themselves facing expensive upgrades and repairs? Costs to maintain and operate this infrastructure are going to continue to rise as it ages.”

IRU Conservation Director Kevin Lewis said that for decades industry and federal officials have touted the “benefits” generated by the lower Snake River dams. “These reports and others clearly show that such assertions are less than honest,” Lewis said. “And while we’ve been enduring the government’s rhetoric, endangered wild salmon, Puget Sound orcas, and Northwest fishing communities have suffered as collateral damage.”

The overall costs and benefits of these dams have been in dispute for years. These two reports show that benefits are modest and shrinking, while costs are large and growing. These reports beg the question: does it make sense for the region’s ratepayers and nation’s taxpayers to continue throwing good money after bad, especially when critical needs elsewhere in the Columbia system are piling up?

The costs of maintaining and operating this navigation corridor through these four federal dams on the lower Snake River, meanwhile, have steadily increased. When these numbers are placed side by side, the report determines that the corridor’s annual maintenance and operations costs today are more than twice its benefits.

While lower Snake River shipping costs have mounted and benefits waned, public and private investors have been focusing on expanding rail networks in and adjacent to the Lewiston-Clarkston Valley. As a result, rail usage in this region has grown due to increased capacity, reliability and competitiveness when compared with waterborne shipping on the lower Snake.

Moreover, the study points out that the Pacific Northwest power system only runs at about 84 percent capacity with about 4,600 annual megawatts of surplus energy—more by far than the lower Snake River dams generate.

“To summarize, the [lower Snake River dams] are not needed from a capacity standpoint,” the study states. “From a cost standpoint there are options that result in lower cost power for Northwest ratepayers if the dams are removed.”

Rocky Mountain Econometrics (RME) has been actively analyzing Northwest energy and lower Snake River dam issues since 1985. In the 1980s and 1990s, the author served as staff economist for the Idaho Public Utilities Commission. In 1998, RME was hired by the state of Idaho to monitor the Army Corp of Engineers’ development of the Lower Snake River Juvenile Salmon Migration Feasibility Report/Environmental Impact Statement and the potential breaching of the four lower Snake River dams in Washington state.

The reports can be downloaded here: