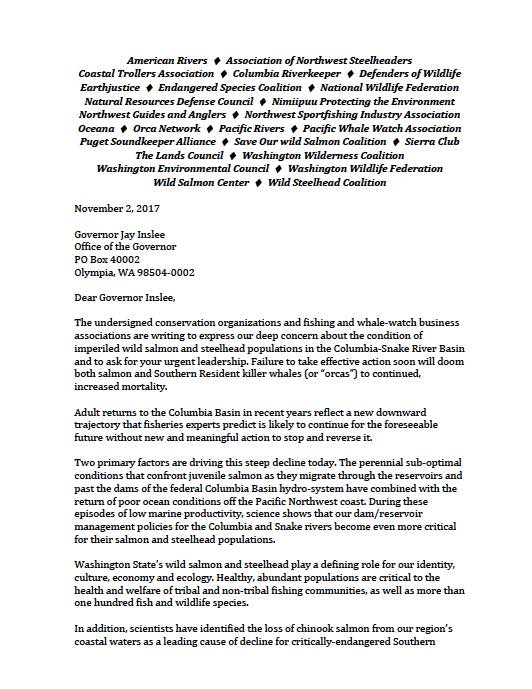 Twenty-five conservation organizations and business associations sent a letter to Washington State Governor Jay Inslee today asking him to act quickly to raise Washington State’s water quality standards for the lower Columbia and Snake rivers in order to allow for expanded spill to improve survival of ocean-bound juvenile salmon. A modification in the state’s rules in the next several months would allow for increased spill levels during the upcoming juvenile fish migration to the Pacific Ocean this spring.

The letter emphasizes the urgency of the situation facing the orca, other fish and wildlife and fishing communities that rely on healthy salmon and steelhead populations: “Salmon returns to the Columbia Basin in recent years reflect a new downward trajectory that fisheries experts predict is likely to continue for the foreseeable future without new and meaningful action to stop and reverse it.”

The letter continues: “Washington State’s wild salmon and steelhead play a defining role for our identity, culture, economy and ecology. Healthy, abundant populations are critical to the health and welfare of tribal and non-tribal fishing communities, as well as more than one hundred fish and wildlife species.”

Liz Hamilton, executive director of the Northwest Sportfishing Industry Association: “Spill keeps migrating juvenile salmon safer by sending water over federal dams in the Columbia and Snake rivers rather than through the powerhouses. Spill is one of the most effective immediate actions we can take to increase the survival of juvenile salmon and steelhead migrating to the Pacific Ocean. Most importantly, the more spill, the more adult salmon that return to the Columbia Basin and its tributaries in the years that follow.”

Bill Arthur, director of the Sierra Club’s Northwest Salmon Campaign: “We hope that the Governor acts quickly to take advantage of this opportunity. The wild salmon and steelhead of the Columbia Basin – and the orca and other fish and wildlife that rely on them – are in serious trouble today. Increasing spill as soon as possible is a critical near-term step toward healthier rivers and healthier salmon.

Many of the already imperiled populations of wild salmon and steelhead in the Columbia-Snake River Basin have suffered steep declines in the last several years – causing grave concern among fish managers and spurring scientists and advocates to call on policymakers to implement new immediate measures that can help stop and reverse this downward trend.

The critically endangered Southern Resident killer whales have lost seven whales in the last year. With just 76 individual whales and no successful reproduction since 2015, this population is at its lowest level in thirty years. Lack of prey – chinook salmon – has been identified as a primary cause of decline for this orca population. Insufficient food resources has increased the number of deaths and decreased reproductive success.

Increasing spill over the lower Snake and lower Columbia River dams in spring and summer is widely seen by regional fish managers and scientists as our most effective action to help struggling wild salmon and steelhead populations in the near-term until the Northwest has a legally valid, science-based plan for the Columbia Basin in place. The federal government’s last plan was rejected in 2016 by the U.S. District Court in Portland. The judge overseeing the case ordered the federal agencies to produce a new plan in 2018 and complete by 2021 a comprehensive environmental review that carefully considers all recovery alternatives including the removal of the four lower Snake River dams.

The last five federal plans for Columbia Basin wild salmon and steelhead have been invalidated by federal courts. Despite more than $10 billion in spending by dam agencies over the last twenty years, not one of the basin’s thirteen populations protected under the Endangered Species Act has been restored.

The letter can be viewed and downloaded here.