For Immediate Release: Scientists send letter to policymakers affirming the benefits of “spill” over Columbia Basin dams – to help for endangered wild salmon and steelhead 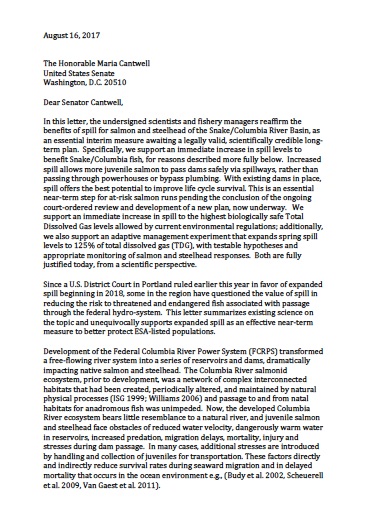 Boise, ID – Today, 46 natural resource scientists delivered a letter to members of Congress and Governors in Northwest states highlighting the well established and empirically demonstrated evidence supporting the benefits of “spill” – water releases over the tops of federal dams on the Columbia and Snake Rivers during the juvenile out-migration to the Pacific Ocean during the spring and summer months. Spill has proven to be one of the most effective immediate dam management options to help improve the survival of young salmon and increase adult returns in the years that follow.

The letter can be viewed here: https://tinyurl.com/ybbetfvw

Dave Cannamela, retired fisheries biologist (Boise, Idaho): “Spill is without a doubt the most effective interim measure we can implement to help maintain critically endangered salmon, steelhead, and lamprey populations in the Columbia and Snake Rivers.  While spill is only an interim measure it is a very important one because it buys us time to work collectively to develop a durable, effective, long-term solution.  Everyone will benefit when salmon and the ecosystem, economy, and cultures they support are restored.”

Despite long-standing scientific support and a 20-year ongoing collaborative study involving state, federal, and tribal scientists from across the region, spill has met strong resistance from some agencies and industries in the Pacific Northwest. Because spilled water is not sent through turbines, it can modestly reduce the overall production of hydro-electricity in the Columbia-Snake River system.

Following up on his May 2016 ruling that invalidated the 2014 Columbia Basin Salmon Biological Opinion (Federal Salmon Plan), U.S. District Court Judge Michael Simon required federal defendants in April this year to collaborate with plaintiffs to develop a plan that increases spill to levels currently allowed by state law in order to improve survival of imperiled salmon as they migrate through the federal dams and reservoirs. Up to 70% of the Snake River salmon and steelhead are killed by the eight dams and reservoirs on the lower Snake and lower Columbia rivers.

Rod Sando, retired biologist and former director of the Columbia Basin Fish and Wildlife Authority (Woodburn, Oregon): “While the court’s order to increase spill will help improve the survival of salmon as they migrate past the dams, much more is needed. The science, for example, indicates that spill levels above the current total dissolved gas (TDG) cap may have further benefits to smolt survival. This is considerably more than the court ordered starting in the spring of 2018. Spill up to 125% TDG reduces migration time, reduces the number of fish exposed to deadly turbines, reduces predation and delivers more fish more quickly and safely to the ocean.  It improves adult salmon returns in later years.”

This 2016 ruling and 2017 order for injunctive relief to increase spill has been challenged by five Northwest lawmakers who recently introduced legislation that would block this court order, lock in illegal, inadequate status quo operations for the hydro-system at least through 2022, and prohibit study of any measures to help salmon that would reduce energy production in the hydro-system, including additional spill and lower Snake River dam removal.   Many scientists view spill as our region’s most effective option for improving the survival of endangered wild salmon and steelhead in the Columbia Snake River Basin and giving them a fighting chance until a legally valid plan has been developed.

The urgency has increased this year given the devastatingly low returns of wild steelhead to Columbia and Snake Rivers. Steelhead returns to date are 10-15 percent the ten-year average. Yesterday, the Idaho Department of Fish and Game announced a prohibition on the harvest of any steelhead during its fishing season this year, delivering a big blow to scores of fishing businesses and communities in central Idaho.

Given the intensifying impacts of climate change, spill is an essential interim measure for the endangered fish of the Snake River Basin. There is a growing recognition by scientists that imperiled salmon and steelhead are unlikely to survive the combined effects of the lower Snake’s four lethal dams and growing climate impacts. Federal agencies, Northwest states and the people of our region must act quickly and work together on a new, science-based approach to salmon restoration or risk losing these iconic fish forever.

Today, there are thirteen wild salmon and steelhead populations in the Columbia-Snake River Basin listed under the Endangered Species Act. Five consecutive federal plans have been rejected by three different judges across two decades. More than 10 billion American taxpayer and Northwest energy consumer dollars have been spent by federal agencies on Columbia Basin salmon restoration in the last twenty years, though not a single population has recovered.

A version of the letter can be viewed here: https://tinyurl.com/ybbetfvw