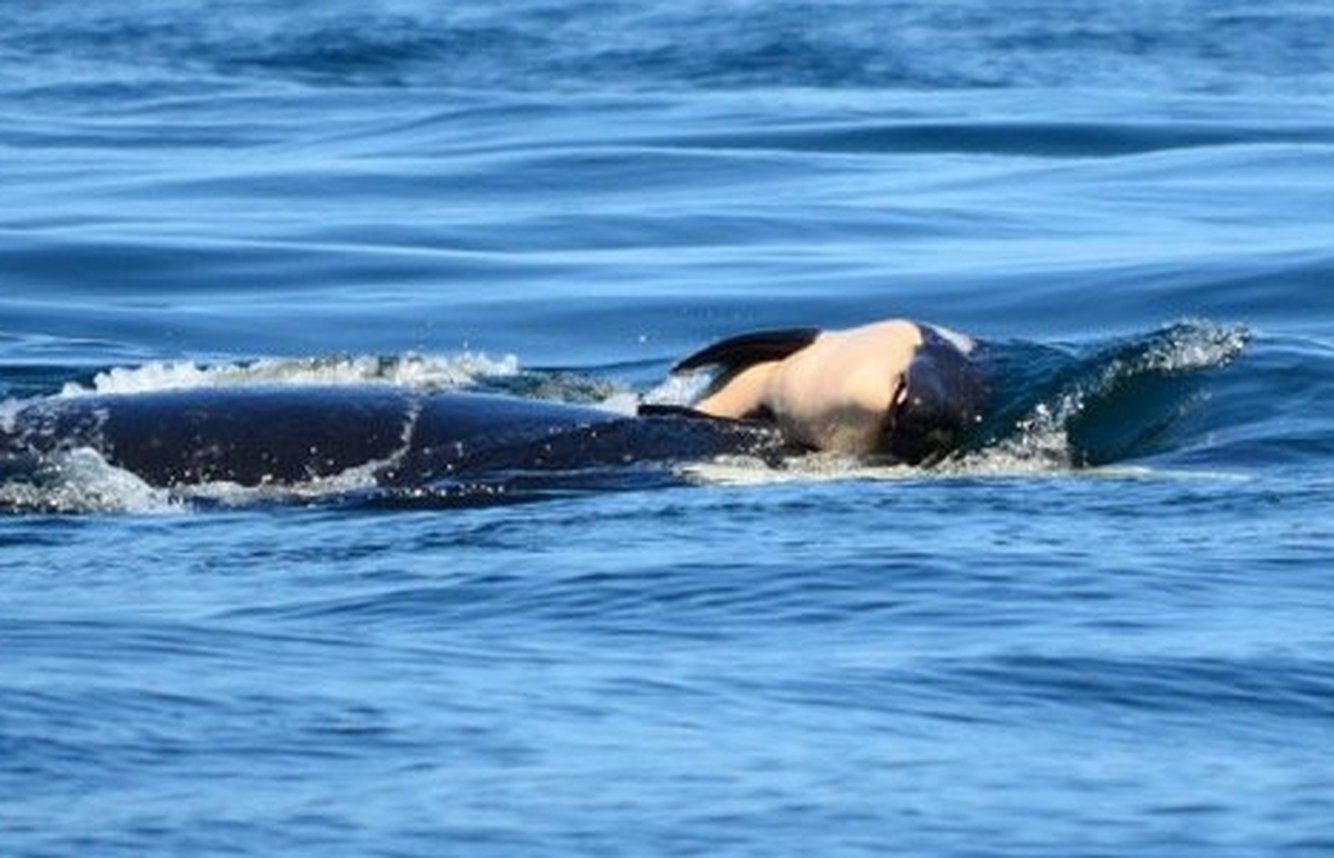 Seattle, Washington — On July 24, the Center for Whale Research confirmed the birth of a female calf to Southern Resident orca J35, “Tahlequah.” Tragically, within a half hour of her birth, the calf had perished. Photos and video show her lifeless body being pushed around by her grieving mother for at least seven days afterward. (image above courtesy of the Center for Whale Research)

This loss comes on the heels of the presumed death in June of L92 or “Crewser,” a 23-year-old male orca from this critically endangered orca population. Following these tragic and consequential losses, the Orca Salmon Alliance (OSA) is calling for renewed attention to the expanding crisis facing the critically-endangered Southern Resident orcas and highlighting the urgent need for bold leadership and action from Governor Inslee, his recently-convened Emergency Orca Recovery Task Force, and other elected leaders in Washington State and the Pacific Northwest. Actions must prioritize substantial increases in prey availability-not only in the long term, but immediately-in order to stop and then reverse the orcas’ steepening decline toward extinction. An extreme shortage of prey – primarily Chinook salmon – is the leading cause for their decline in recent years.

Right now, the whales should be foraging on Fraser River salmon while in their summer habitat in the Salish Sea. Research shows a direct correlation between the size of the Fraser River salmon runs and the presence of the Southern Residents in what has historically been their core summer habitat in this region - the San Juan Islands, the surrounding Straits, and the mouth of the Fraser River near Vancouver B.C. Dismal returns of Chinook salmon this year resulted in the latest arrival on record by the Southern Resident orcas to this core habitat. Given this research and as a part of enacting additional immediate measures, the Task Force must include meaningful transboundary partnerships in order to restore the Fraser River salmon runs as quickly as possible.

Survival of the Southern Resident orca population depends on a series of urgent actions that improve Chinook salmon stocks throughout their range, from Central California to British Columbia. The recovery of salmon and the watersheds they depend upon, especially the Columbia-Snake River system, is essential to ensure the survival and recovery of endangered salmon and the orcas who depend on them to survive.

“This is a five-alarm emergency. These whales need more salmon now. Immediate measures are crucial to ensure their access to the salmon currently available, and to restore vital stocks throughout the orcas’ range. Without immediate and effective measures, these whales will not survive,” said Dr. Deborah Giles, Science Advisor to the Orca Salmon Alliance.

All eyes on Governor Inslee and the Emergency Orca Recovery Task Force
In March, Governor Jay Inslee signed an Executive Order creating the Orca Recovery Task Force. At the time of this announcement, the Orca Salmon Alliance called on the Task Force to take urgent, meaningful measures to restore salmon populations and enact additional changes necessary to protect this beloved population of orcas from extinction. The Task Force, which has met twice, is scheduled to present recommended near-, mid-, and long-term actions to the Governor on October 1st this year; any potential benefits from near-term actions may not be felt until 2019 at the earliest. The Orca Salmon Alliance urges Governor Inslee and the Orca Recovery Task Force to commit to bold, creative solutions in order to begin implementing additional near-term, truly effective actions now and via the task force process.

“Merely tweaking the status quo while extending debate on some of the more impactful and controversial measures will not save the Southern Residents – they need bold, innovative, urgent action,” says Colleen Weiler of Whale and Dolphin Conservation.

“We appreciate the hard work of the Orca Recovery Task Force and Governor Inslee to date. But we have very hard work and tough decisions ahead. Without unprecedented changes to restore resilient rivers and functional, connected ecosystems, and swift action to address immediate needs, the extinction of the Southern Resident orca community is a very real possibility. We need cooperation from stakeholders and assertive leadership from our elected officials to save these iconic orcas. They need food, now.” said Joseph Bogaard of the Save Our wild Salmon Coalition.

Orca scientists estimate this population has at best five years left of reproductive potential. In order for them to benefit from rebuilt salmon populations in the future, they cannot become functionally extinct today.