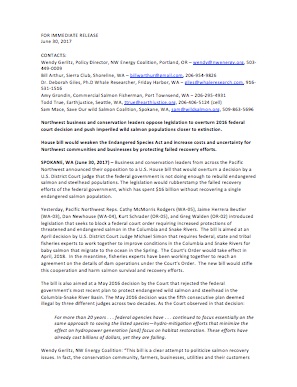 House bill would weaken the Endangered Species Act and increase costs and uncertainty for Northwest communities and businesses by protecting failed recovery efforts.

SPOKANE, WA (June 30, 2017) – Business and conservation leaders from across the Pacific Northwest announced their opposition to a U.S. House bill that would overturn a decision by a U.S. District Court judge that the federal government is not doing enough to rebuild endangered salmon and steelhead populations. The legislation would rubberstamp the failed recovery efforts of the federal government, which has spent $16 billion without recovering a single endangered salmon population. Yesterday, Pacific Northwest Reps. Cathy McMorris Rodgers (WA-05), Jaime Herrera Beutler (WA-03), Dan Newhouse (WA-04), Kurt Schrader (OR-05), and Greg Walden (OR-02) introduced legislation that seeks to block a federal court order requiring increased protections of threatened and endangered salmon in the Columbia and Snake Rivers.  The bill is aimed at an April decision by U.S. District Court Judge Michael Simon that requires federal, state and tribal fisheries experts to work together to improve conditions in the Columbia and Snake Rivers for baby salmon that migrate to the ocean in the Spring.  The Court’s Order would take effect in April, 2018. In the meantime, fisheries experts have been working together to reach an agreement on the details of dam operations under the Court’s Order.  The new bill would stifle this cooperation and harm salmon survival and recovery efforts.

The bill is also aimed at a May 2016 decision by the Court that rejected the federal government’s most recent plan to protect endangered wild salmon and steelhead in the Columbia-Snake River Basin. The May 2016 decision was the fifth consecutive plan deemed illegal by three different judges across two decades. As the Court observed in that decision: For more than 20 years . . . federal agencies have . . . continued to focus essentially on the same approach to saving the listed species—hydro-mitigation efforts that minimize the effect on hydropower generation [and] focus on habitat restoration. These efforts have already cost billions of dollars, yet they are failing.

Wendy Gerlitz, NW Energy Coalition: “This bill is a clear attempt to politicize salmon recovery issues. In fact, the conservation community, farmers, businesses, utilities and their customers actually agree on many facets of this issue – enhancing the value of our renewable hydropower resources, growing our Northwest economy, and restoring the salmon.  Instead of political rhetoric that divides us, we need an inclusive process informed by science, engineering, and economics to craft a path forward that works to maximize the value of our clean hydropower, protects and creates jobs in our communities and restores the salmon.”

Bill Arthur, Sierra Club: “This legislative proposal is misguided, counter-productive and based on an extremely poor understanding of the plight of our salmon and any realistic changes to how Columbia Basin hydro-system would operate to better protect salmon.  We need to follow the science and the law and keep uninformed and damaging political efforts from undermining our best chance for effective salmon recovery.”

Dr. Deborah Giles, Ph.D, Center for Whale Research: “The science is undeniable today. Lack of prey – Chinook salmon – is the single biggest threat to the future of our critically-endangered Southern Resident Orcas. The severe prey shortage today hurts whales directly, and it makes other problems orcas face worse – like toxins and vessel noise. This bill is not just an attack on science and law; it is also an attack on our orca who need more salmon – not less – to survive and recover. This is terrible legislation that Northwest people must work to stop.

Amy Grondin, Commercial Salmon Fisherman: “ ‘Alternative facts’ might be popular in Washington D.C. today, but we don’t need that here in the Northwest. Here are some real facts: Columbia Basin salmon are in big trouble today. Our fishing seasons are small and getting smaller. Across the board, returns this year are predicted drop by 25% compared to last year. Managers were forced to close fisheries this spring due to the unexpectedly low returns. Fishing communities that have already made big sacrifices to protect salmon are facing big hits in the coming years. We need constructive lasting solutions; if this bill becomes law, it’s going to drive a stake through the heart of many fishing businesses on the coast and inland.”

Sam Mace, Save Our wild Salmon Coalition: “Inland Northwest fishermen care deeply about our salmon and steelhead.  They provide family recreation, jobs and sustenance.  With this year’s perilously low fish runs, it is disappointing that our own Congresswoman Cathy McMorris Rodgers wants to run roughshod over the interests of so many of her constituents who care about salmon. Instead of dividing people as this legislation does, she should support the comprehensive environmental review ordered by the court last year.  Instead she wants to blow up the best avenue for avoiding more uncertainty and the loss of our region’s iconic fish.”

After invalidating the 2014 Columbia Basin Salmon Plan last spring, the U.S. District Court ordered NOAA to produce a new legal plan in 2018 and the Action Agencies (ACOE, BPA, USBR) to complete a comprehensive environmental analysis (NEPA Review) that looks at all credible recovery options including the removal of the lower Snake River dams. All Snake River salmon populations are currently listed under the ESA; many scientists agree that extinction will be unavoidable with these four dams in place.

If it becomes law, this legislation will uphold the invalidated 2014 Federal Columbia River Power System (FCRPS) Biological Opinion (BiOp) until 2022. It will also overturn the March 2017 court order to increase spring spill over federal dams on the lower Columbia and Snake Rivers. Spill releases water over the tops of dams and delivers out-migrating juvenile salmon more quickly and safely to the ocean. It is our region’s most effective action in the near-term to improve survival of endangered salmon populations while we work to develop a legally-valid, scientifically-credible and fiscally-responsible plan for Columbia Basin salmon.

This bill is particularly poorly timed, as adult salmon returns to the Columbia Basin are down this year. Fisheries managers have predicted that adult returns this year to the Columbia and Snake Rivers and their tributaries will drop significantly compared to last year. Certain populations, like B-run steelhead, are in dismal shape. Just 1100 wild fish are expected to return to the Columbia Basin in 2017. These extremely low returns have alarmed managers and triggered fishing closures in Washington, Oregon and Idaho this spring.

The bill can be viewed here:
https://mcmorris.house.gov/wp-content/uploads/2017/06/MCMORR_021_xml.pdf