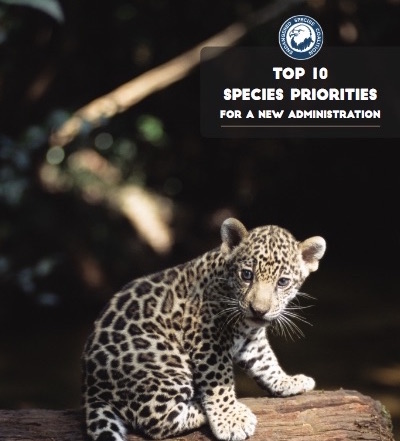 Washington, D.C. – As the Obama Administration prepares to hand over the reins of the executive branch to President-elect Donald Trump, the DC-based Endangered Species Coalition released on Wednesday a “Top Ten” list of imperiled species in need of strong conservation measures. The report, “Removing the Walls to Recovery: Top 10 Species Priorities for a New Administration,” highlights some of the most significant threats to vanishing wildlife such as wild salmon, jaguars and elephants, and identifies important actions the next administration could take to stop their decline and begin to rebuild these populations.

“We nominated Snake River chinook for this report because with climate change, these four money-losing dams become deadlier each summer, when reservoir water temperatures become lethally hot, causing fish kills” said Save Our Wild Salmon Inland Northwest Director Sam Mace.  “But if we free the Snake River of these dams, wild salmon will once again access thousands of miles of pristine, high-elevation habitat that can provide an ark for salmon in a warming world.”

Snake River Chinook salmon, are among the longest and highest-migrating salmon on the planet – often swimming 1,000 miles upstream and climbing more than 6,000 feet in elevation to reach their spawning grounds. More than 130 other species depend upon salmon, including orcas, bears and eagles.

“Since Northwest rivers began to flow, a population of orcas known as the Southern Residents have relied on Columbia basin salmon to sustain them.  Spring chinook that spawn in the Snake River basin are especially critical for survival of this unique and now endangered orca community.  Unfortunately, the lower Snake River dams have decimated this critical food source.  The impact these dams have on this precious, but dwindling, population of orcas, must be addressed.” said Howard Garrett, Board President of Orca Network.

Some of the species in the report, such as the Joshua tree and Elkhorn coral are foundational species, which play a critical role as building blocks for their ecosystems, but are threatened by global climate change.

Other critically important species in the report are keystone species, such as Hawaii’s yellow-faced bee, the jaguar, and the Snake River salmon. All keystone species have a disproportionately large impact on other species and ecosystems, relative to their abundance. For instance, Hawaii’s yellow-faced bee is a pollinator impacted by habitat loss.

The jaguar of the southwest United States is a keystone predator. It is particularly threatened by habitat fragmentation caused, in part, due to impenetrable immigration barriers along the U.S. – Mexican border. The report urges Mr. Trump to abandon plans to further fortify the southern border, and to make existing barriers more wildlife-friendly.

The U.S. Fish and Wildlife Service declined to list the greater sage grouse—an umbrella species—as endangered in 2014, citing an unprecedented region-wide habitat conservation effort, tied to state and federal conservation plans. However, several appropriations riders offered in Congress in 2016 would block implementation of these conservation plans, as well as any future Endangered Species Act protections for the imperiled bird. Meanwhile, grouse numbers have declined by 90 percent from historic levels. Protecting umbrella species like sage grouse conserves habitats on which many other species rely.

“Our native fish, plants and wildlife are critically valuable and part of the legacy we leave for future generations of Americans,” said Leda Huta, executive director of the Endangered Species Coalition. “We hope the next administration takes seriously its responsibility to protect endangered species and habitat. The fate of species is in their hands. Their actions could dictate whether species such as the vaquita, the red wolf, and others, become extinct in the wild.”

The remaining species featured in the Endangered Species Coalition’s report include the African elephant, Bald cypress tree, the wolf, and the vaquita – a small endangered Mexican porpoise.

Endangered Species Coalition member groups nominated wildlife species for the report. A committee of distinguished scientists reviewed the nominations, and decided which species should be included in the final report. The full report, along with links to photos and additional species information can be viewed and downloaded   from the website: http://removingthewallstorecovery.org.

The Endangered Species Coalition produces a “Top 10” report annually, focusing on a different theme each year. Previous years’ reports  are also available on the Coalition’s website.