FOR IMMEDIATE RELEASE: More than 250,000 Urge Feds to Do More to Save Salmon 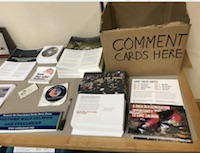 More than 250,000 Urge Feds to Do More to Save Salmon
Their message: Lower Snake River dam removal demands full, fair consideration in the upcoming EIS

PORTLAND, OR— Along the West Coast and nationally, conservation groups, fishing business associations and others have tallied the public input to date that their members have submitted to the Army Corps of Engineers in response to a federal court order requiring a new plan for protecting Columbia and Snake River salmon from harmful dam operations, and the results are impressive.

More than 250,000 individuals have submitted comments since early October when the federal agencies’ (Army Corps of Engineers, Bonneville Power Administration, U.S. Bureau of Reclamation) public comment period began. The vast majority of these comments are urging the Corps to remove the four lower Snake River dams in order to bring back healthy, fishable populations of wild salmon and steelhead. And there is still time for people to weigh in, as the public comment period does not close until Tuesday, Feb. 7. By that date, all comments gathered in recent months by Earthjustice, Save Our Wild Salmon, the Sierra Club, American Rivers, National Wildlife Federation, Natural Resources Defense Council, Northwest Sportfishing Industry Association, Pacific Coast Federation of Fishermen’s Associations and many other allied organizations and businesses will be sent to federal agencies. Some organizations will also submit detailed policy comments.

The agencies that manage the federal dams on the Columbia and Snake River have been required to undertake this planning process under the National Environmental Policy Act, after their latest plan was rejected by a federal court in Portland, Oregon in May 2016.  It was the fifth plan in a row the courts have thrown out. The judge wrote that while “these efforts have already cost billions of dollars … they are failing” and that “the system literally cries out for a major overhaul.” The court urged that new alternatives be fully examined, including “the reasonable alternative of breaching, bypassing, or removing one or more of the four Lower Snake River Dams.”

Some comments pointed to the economic threats to the sport- and commercial-fishing industries. “I live and work along the lower Columbia River, and my work and ability to support my family depend on strong runs of salmon and steelhead,” wrote Evan Burck of Portland, OR.

Other concerns include the massive sockeye salmon die-offs in 2015, which were attributed to overly-warm water in the Columbia-Snake system.

Still more comments describe dam removal as a smarter use of taxpayer dollars than continuing to shore up aging dams built in the 1970s that produce a relatively small amount of power.

"Patagonia has been fighting to remove the four deadbeat dams on the lower Snake River for over 20 years because we know how destructive and unnecessary they are,” said Aaron Altshuler, a store manager at Patagonia. “Negatively impacting salmon habitat and migration as well as limiting recreational activities are but two of the many reasons to remove these low value dams and let the Snake flow freely again."

"Our Lewiston community opposed the dams before they were built,” said Curt Chang, who oversees O.A.R.S.’ operation in Idaho, where he’s worked for more than four decades fostering the tradition of dories on Idaho's Rivers. “For more than 40 years, we compromised to make way for a heavily subsidized barging corridor. But these dams no longer make sense. It’s time to free the Snake River for our wild salmon, our communities and our businesses."

“These dams don't make sense for people or for salmon,” wrote Edwina Allen of Boise, ID. “As we have seen after removing the dams on the Elwha in the Olympic Peninsula, the salmon return in abundance. Let's put our tax dollars where they can build a better future, not toward spending huge amounts on repairing aging, outdated dams.”

The sheer volume of comments indicates that many residents of the Pacific Northwest strongly support restoring a freely-flowing lower Snake River and believe the federal government must take dam removal seriously in the upcoming EIS.

There’s one more week to add public voices to the discussion. Comments are being accepted online at comments@crso.info and must be submitted before the Feb. 7 deadline.