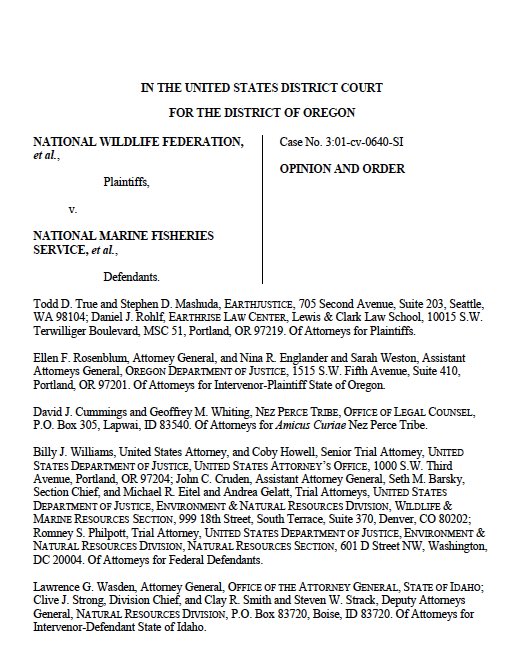 PORTLAND, OR — Federal dam operators on the Columbia and Snake rivers must increase water releases over spillways at eight dams to improve survival rates for juvenile salmon migrating to the ocean starting in 2018, a federal court ruled today. Portland U.S. District Court Judge Michael Simon found that current operation of these federal dams is causing continued irreparable harm to imperiled salmon and steelhead and that increased “spill” indisputably provides safer passage for juvenile salmon navigating the heavily dammed Columbia-Snake River Basin. In the meantime, the spill in place under court order since the summer of 2005 will continue.

“While we recognize that this relief will not eliminate the harm to salmon and steelhead from dam operations in the long run, we are encouraged that increased spring spill will be granted to reduce irreparable harm to juvenile salmon and steelhead,” said Earthjustice attorney Todd True. Together with the State of Oregon and the Nez Perce Tribe, Earthjustice sought the injunction to increase voluntary spill on behalf of the National Wildlife Federation, Pacific Coast Federation of Fisheries Associations, Northwest Sportfishing Industry Association, Idaho Rivers United, the Northwest Energy Coalition and other conservation organizations and fishing business associations.

Fishermen were especially encouraged by the court's decision to require the agencies to provide increased spill until a new lawful plan is in place. “We’re relieved that the court will provide much-needed near-term help to salmon populations that call the Columbia and Snake rivers home,” said Amy Grondin, a Washington commercial salmon fisherman. “Family fishing businesses like mine have struggled for years due to low salmon populations. We can’t continue to wait for years for the federal agencies to finally get this right.”

“This is about much more than saving fish,” said Liz Hamilton, executive director of the Northwest Sportfishing Industry Association.  “Until the federal agencies are willing to comply with the law, we are glad short-term measures will be in place to give migrating fish the fighting chance they need. We owe it to ourselves and future generations to get this right.”

“We’re pleased that the court continues to closely examine the facts in this case and recognizes that these facts demand additional actions on behalf of Columbia and Snake River salmon and steelhead,” said Tom France, regional executive director of the National Wildlife Federation.

Federal agencies are currently conducting a National Environmental Policy Act EIS Review in the wake of a May 2016 ruling that rejected the government’s latest salmon protection plan as illegal under NEPA and the Endangered Species Act. Agencies must consider removing the four lower Snake River dams as one of several alternatives in that analysis. Last fall, they held a series of NEPA scoping meetings to solicit public input on the new plan across the Northwest that drew thousands of people in support of dam removal. At a March 9 court hearing, however, Judge Simon indicated he was "disheartened" by feedback from concerned citizens that the agencies had not provided adequate information nor offered meaningful opportunity for input and dialogue.

The request for injunction also sought a moratorium on tens of millions in capital spending on projects that would extend the life of dams on the lower Snake River at a time when the agencies are supposed to be fully and fairly considering their removal.  The Court agreed with the conservation and fishing groups that these capital investments likely create “a significant risk of bias.”  While the Court did not grant the request for an immediate halt to spending on all future capital projects, it ordered the Corps to provide the groups with regular and timely advance notice of planned projects so that they may seek an injunction against those that “substantially may bias the NEPA process.”

"For more than two decades we've been asking federal agencies to do more for our endangered wild salmon,” said Kevin Lewis, executive director of Idaho Rivers United. “It's unfortunate we've had to go to court to get the results our salmon and people who depend on them need, and it's equally disturbing that the federal government continues to pour tens of millions of dollars into propping up four obsolete dams on the lower Snake River. It's simultaneously encouraging, however, that a federal judge has once again agreed with us."

Background and materials from Judge Simon's May 2016 ruling HERE.