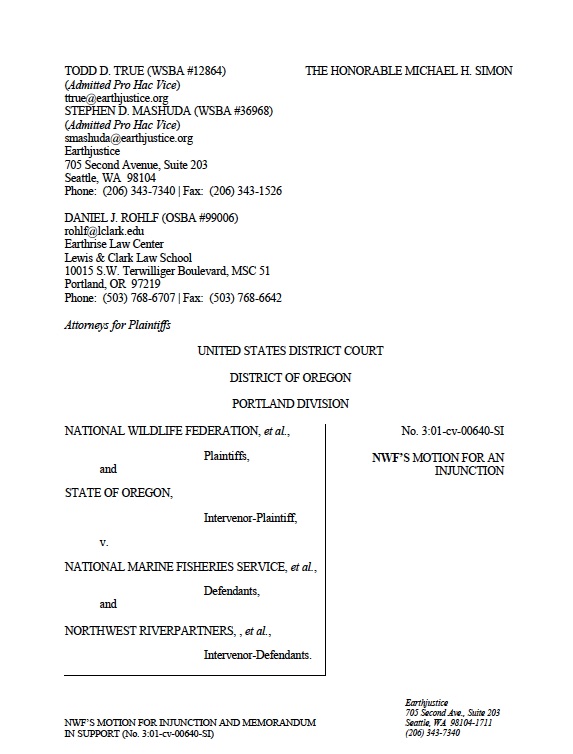 PORTLAND, Ore. – Conservationists and fishing groups represented by Earthjustice, together with the State of Oregon and with support from the Nez Perce Tribe, filed motions for injunctive relief today asking the U.S. District Court in Portland to compel federal agencies to take important interim steps to safeguard wild salmon. These measures should be implemented in the short-term while the agencies move ahead with developing a new plan to protect threatened and endangered wild salmon and steelhead runs in the Columbia and Snake rivers.

First, these parties have requested that the dam management agencies increase the amount of water that flows over the dam spillways, known as “spill,” to improve survival rates during the spring juvenile salmon migration season. Second, fishing and conservation groups represented by Earthjustice have also asked the Court to halt federal agency capital spending on major long-term investments in the four lower Snake River dams until the agencies complete a new and adequate salmon plan. The agencies must consider the alternative of removing these dams as part of that planning effort.

“It makes no sense to continue investing tens of millions of dollars in these dams when we know removing them is the single best step we can take to protect our legacy of wild salmon in the Snake River,” said Earthjustice attorney Todd True.

The Court began ordering agencies to spill water past the dams in 2005 to help salmon survival, and the enhanced river flows have helped increase the survival of endangered and threatened salmon and steelhead. Scientific evidence now indicates that even more spill will provide even more survival benefits to these imperiled fish.

“The numbers of salmon returning to the Columbia Basin are declining and these declines are being felt sharply by our businesses and the families they employ,” said Liz Hamilton, executive director of the Northwest Sportfishing Industry Association. “From NSIA’s perspective, the best thing that has happened for salmon was when Judge Redden ordered more spill for fall outmigrants in 2006.  You’d think that the data on the positive response from fall chinook would have NOAA clamoring to do the same for spring outmigrants, but here we are.  More spill is a no-brainer for fish.”

An interim increase in spill will not guarantee the long-term survival of wild salmon, however, so Earthjustice is also seeking measures to ensure a fair and straightforward analysis that will ultimately steer salmon toward recovery. Until the agencies prepare a long-term and legal salmon plan that objectively examines dam removal, fishing and conservationist plaintiffs have called for a moratorium on spending on expensive infrastructure upgrades that aim to extend the life of the dams. The law is clear: These kinds of investments should be suspended to ensure a level playing field for examination of all of the alternatives the agencies must consider, including the alternative of removing the four Snake River dams.

"For 20 years Idahoans have been frustrated by the federal government's failure to deliver actions that work for salmon and the people who depend on them," said Kevin Lewis, executive director of Idaho Rivers United, one of the plaintiffs. "This filing is to prevent the federal government from stonewalling real progress in the Pacific Northwest and Idaho."

A significant drain on public resources would be eliminated with the removal of the four dams, which are money losers for both tax- and bill-payers. At the same time, dam removal could bring about an economic boost to the flagging commercial and sportfishing industries.

Sportfishing in the Northwest is a roughly $3 billion annual endeavor, with over half a million participants fishing in the Columbia tributaries and marine areas. Salmon declines have caused the commercial fishing industry to suffer, with government estimates showing that personal income values associated with Columbia salmon runs dropped from an historic high of approximately $500 million/year to under $20 million.

"The once-great salmon runs of the Columbia-Snake River are one of the Pacific Northwest's most valuable economic resources, potentially supporting a billion dollar fishing industry and tens of thousands more jobs," said Glen Spain, NW Regional Director of the Pacific Coast Federation of Fishermen's Associations (PCFFA), a major fishing industry co-Plaintiff organization asking for this injunctive relief.  "Until there is a legal Salmon Recovery Plan in place, we are only asking the Court to order the feds to do more of what the scientists know works (i.e., more spring "spill") while not committing to doing more stuff like what has never worked."

The four lower Snake River dams represent a minor and easily replaced component of the Northwest energy grid – yet continue to pose a major obstacle to salmon survival. To date, more than a quarter million supporters have formally submitted comments calling on federal agencies to remove the four lower Snake River dams. Investing millions in dam infrastructure at this point would amount to ignoring public feedback that salmon restoration should be the top priority.