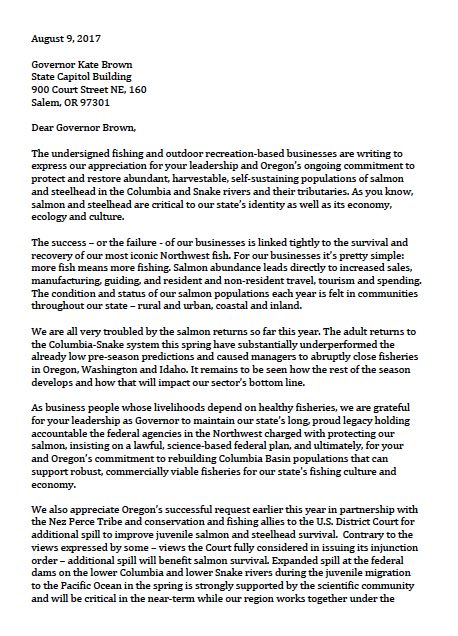 Portland, OR – Today, 70 Oregon-based recreational fishing and outdoor-based companies delivered a letter to Oregon Governor Kate Brown thanking her for her commitment - and the State of Oregon’s ongoing leadership – to protect and restore endangered wild salmon and steelhead in the Columbia and Snake River Basin.

The letter can be downloaded here.

The fishing and outdoor recreation-based businesses sent their letter “to express our appreciation for your leadership and Oregon’s ongoing commitment to protect and restore abundant, harvestable, self-sustaining populations of salmon and steelhead in the Columbia and Snake rivers and their tributaries.” The letter states that “[t]he success – or the failure - of our businesses is linked tightly to the survival and recovery of our most iconic Northwest fish. For our businesses it’s pretty simple: more fish means more fishing. Salmon abundance leads directly to increased sales, manufacturing, guiding, and resident and non-resident travel, tourism and spending.”

Chris Daughters, the owner of The Caddis Fly Angling Shop in Eugene: “Healthy populations of salmon and steelhead are the bread and butter of many angling shops like mine. I am proud of Oregon’s long history advocating for these special fish – and I greatly appreciate Governor Brown’s commitment to maintain this legacy and leadership. Businesses like mine depend on it.”

Bob Rees, owner of Bob Rees’ Fishing Guide Service in Oregon City: “Oregon is home to literally hundreds of small, independent fishing guiding businesses just like mine. Our fishing sector overall – manufacturing, sales and guiding along with fishing-related food sales and lodging - generates tens of millions of dollars in Oregon every year. But only as long as there are fish and a fishing season. Since taking office, Governor Brown has not wavered in her commitment to protect and rebuild these fisheries for today’s and tomorrow’s Oregonians.  Without that type of leadership, my business cannot exist.”

The State of Oregon, joined by the Nez Perce Tribe and conservation and fishing advocates have successfully challenged a series of inadequate, illegal plans produced by federal agencies in the Northwest as required by the Endangered Species Act. Five consecutive plans have been rejected by the three different judges in the U.S. District Court in Portland over the past two decades. The most recent ruling was issued by Judge Michael Simon. He invalidated the latest federal plan and ordered the agencies to undertake a full and fair environmental review that considers all credible restoration options including the removal of the four lower Snake River dams. This spring, he also ordered additional spill starting in 2018. Spill sends water over dams and helps ocean-bound migrating juvenile salmon arrive more quickly and safely at the ocean.

This 2016 ruling invalidating the latest federal plan and 2017 order for injunctive relief designed to help endangered salmon and steelhead have been challenged by five Northwest lawmakers who recently introduced H.R. 3144 – legislation that if passed into law would further harm endangered salmon by blocking the additional court-ordered spill, locking in illegal, inadequate status quo operations for the hydro-system at least through 2022, and prohibiting study of critical measures to help salmon, including spill and lower Snake River dam removal.

Aaron Altshuler, Patagonia’s store manager in Portland: “Outdoor recreation is a big part of Oregon’s identity and economy. Thankfully, due to the visionary leadership of so many Oregon elected officials, our state has a rich legacy of wild lands, wild rivers, and wildlife. It is a big reason people come here. Outdoor businesses like Patagonia really appreciate the Governor’s commitment to both protecting and restoring healthy rivers and the wild salmon and steelhead populations they support. A healthy environment means rich outdoor opportunities, and that is really good for our bottom line and for thousands of other Oregon-based businesses.”

Today, there are thirteen wild salmon and steelhead populations in the Columbia-Snake River Basin listed under the Endangered Species Act. Five consecutive federal plans have been rejected by three different judges across two decades. More than 10 billion American taxpayer and Northwest energy consumer dollars have been spent by federal agencies on Columbia Basin salmon restoration efforts over the last twenty years, though not a single population has recovered.

The Business Letter to Governor Brown can be viewed here.