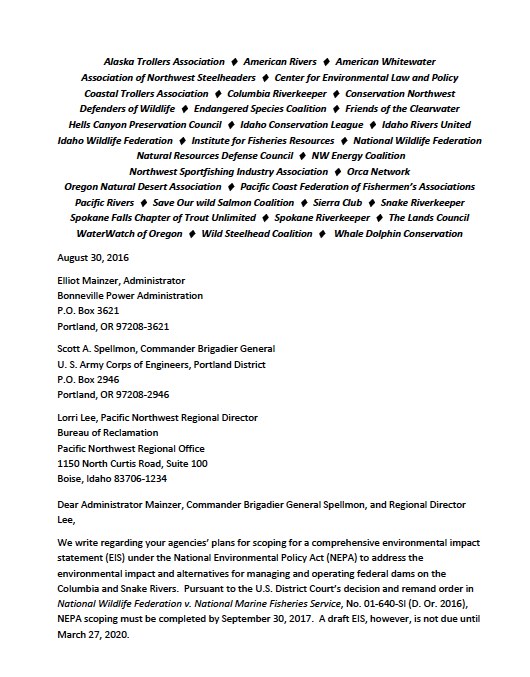 On August 30, 2016, 33 Northwest and national organizations and business associations sent a letter asking the Bonneville Power Administration, Army Corps of Engineers and Bureau of Reclamation to schedule a 90-day Public Comment Period as part of the NEPA Scoping Process beginning soon after January 1, 2017. These three "Action Agencies" recently communicated that they were considering planning a series of meetings in the Northwest to solicit public input as required by the National Environmental Policy Act (NEPA) this fall between mid-October and mid-January - the same timeframe as the Presidential election and major year-end holidays.

The letter expresses strong concern "that the proposed scoping process timeline would fall over—what is for us, our members, and many members of the public—the busiest time of year."

"Our organizations represent a diversity of interests and stakeholders that range from fishermen and business leaders to environmental advocates and scientific and energy experts. We offer important perspectives on the management of the Columbia and Snake River dams, and we are personally and professionally invested in this NEPA process…And the first step in that process is to allow a full and fair scoping opportunity consistent with the overall NEPA schedule, not one that could limit meaningful public participation."

"Our ask is simple—to be given a meaningful opportunity to participate in the scoping process. Specifically, we request that you not schedule public comment and hearings for this process over the election and holidays. Instead we ask that - regardless of when you initiate the scoping process - you schedule a public comment period of no less than 90 days that includes a series of public hearings throughout the region to commence in January 2017."

Last May, BPA, ACOE and BOR - the federal agencies charged with protecting 13 populations of federally endangered wild salmon and steelhead in the Columbia and Snake rivers - were handed their fifth consecutive defeat in federal court. Judge Michael Simon of the United States District Court in Portland soundly rejected 2014 Columbia Basin Federal Columbia River Power System (FCRPS) Biological Opinion (BiOp) as inadequate and illegal. In addition to numerous violations of the Endangered Species Act, the Court also found that the agencies' plan violated NEPA. In his Court Order, Judge Simon is requiring the federal agencies to produce an Environmental Impact Statement (EIS) pursuant to NEPA that will inform the new lawful Biological Opinion several years from now.

NEPA requires the federal agencies to undertake a thorough, transparent, information-rich analysis and review of the latest scientific, economic and social information concerning the harmful impacts on wild salmon and steelhead caused by the federal dams on the lower Columbia and Snake Rivers. NEPA requires robust opportunities for public participation and full and careful consideration of all salmon restoration alternatives, including for example, the removal of the lower Snake River dams.

Scoping is the first step in a NEPA process and is designed to provide the public its opportunity to help the agencies identify the full set of issues, questions, and alternatives to analyze and consider.  The final product of this NEPA process - an EIS - is supposed to inform the next Biological Opinion for Columbia Basin salmon recovery and federal dam operations.  Signers of the August 30 letter firmly believe that scheduling Public Comment immediately after this fall – a very busy time year - will result in considerably more robust and substantive input - and a more inclusive and accessible dialogue within and across the region. And will build solid foundation for the analysis and review to follow.

You can view the letter (pdf) here.