For Immediate Release: 31 Groups Send Letter to WA and OR members of Congress re: Columbia Basin salmon recovery 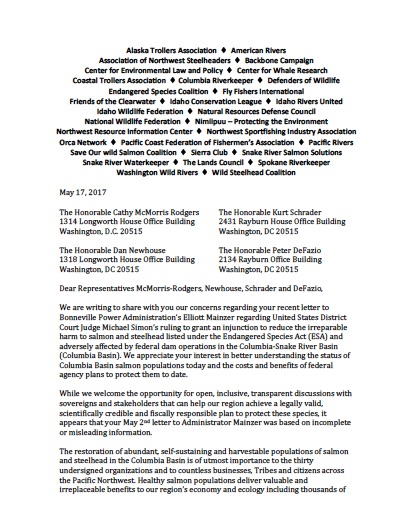 31 Northwest conservation organizations and fishing business associations sent a letter today to Representatives Cathy McMorris Rodgers (R-WA), Dan Newhouse (R-WA), Kurt Schrader (D-OR), and Peter DeFazio (D-OR) in response to their May 2 letter to BPA Administrator Elliott Mainzer. Their letter sent earlier this month raised a number of issues concerning the status of Columbia Basin salmon restoration, including:
-- the court’s invalidation in 2016 of the federal agencies’ most recent Biological Opinion
-- the court’s recent decision to grant injunctive relief (incl. additional spill starting in 2018) and
-- the costs and benefits of increased spill on the survival of ESA-listed salmon and steelhead populations.

The May 2 Letter from four NW members of Congress to Mainzer can be viewed here.

Today’s letter to those four members of Congress from thirty-one Northwest groups can be viewed here.

This conservation and business letter seeks to clarify a number of issues raised in the May 2 Letter and urge a new and different approach for our region as we move forward in 2017. The efficacy of the federal agencies strategy to date speaks for itself: five consecutive illegal federal plans across twenty years and three different judges; $15B is spending and not one of thirteen imperiled populations recovered. The people and communities of the Pacific Northwest desperately need a new approach that prioritizes bringing together affected stakeholders and interests to work together to develop an effective legally-valid, scientifically credible and fiscally-responsible plan that protects and restores our imperiled salmon and steelhead populations in the Columbia Basin and helps Northwest communities and businesses.

The urgent need for meaningful action in the near-term and effective leadership in the region has been further and tragically highlighted this spring with the early and very discouraging/troubling adult salmon returns to the Columbia Basin. Here are two recent articles with further details: