TriCity Herald: Activist groups say give us our dammed Snake River back. 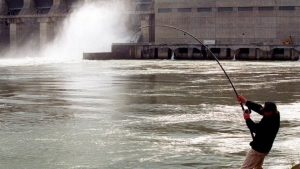 The mighty Columbia and Snake rivers are synonymous with salmon. As many as 16 million once returned to these rivers each year.

What does warm water have to do with dams?

The lower Snake dams create large, shallow reservoirs that trap the sun’s heat and warm the river until it becomes uninhabitable for salmon during much of the summer. Computer modeling shows that removing the lower four Snake dams could solve the hot water crisis in the lower Snake — even in very hot years.

The pro-dam opinion piece misleadingly claimed that lower Snake River dams and Snake River salmon can co-exist. It’s a comforting story, but study after study shows it’s not true. For example, a 2017 study by the Fish Passage Center — the federal scientific agency created to study dams’ impact on salmon — found that removing the lower Snake dams would allow threatened Snake River spring Chinook to recover. Keeping the dams would not.

The pro-dam article also failed to mention that 96 percent of the “record” 2015 Snake River sockeye run died because of hot water. Those endangered sockeye never made it past the four lower Snake dams. This year is hardly better; about 657 endangered sockeye returned to the Snake, but nearly two-thirds died (or will soon die) without making it past Little Goose Dam in eastern Washington.

It’s increasingly obvious that we must choose Snake River salmon — and the jobs, cultures, and ecosystems they support — or the four lower Snake dams. We can choose free-flowing rivers, teeming with fish. We can choose vibrant commercial, subsistence, and recreational fisheries from Southeast Alaska to Astoria, Oregon, to central Idaho. We can choose to protect and restore salmon, the emblem of the Northwest.

But we must choose.

If we needed these four dams, the choice might be tougher. Fortunately, the lower Snake dams only make about 4 percent of the Northwest’s electricity, and our region already produces more power than we use. What’s more, regional power planning models show that we could replace the lower Snake dams’ electricity without burning fossil fuels or breaking the bank — while improving the reliability of our electrical grid.

To be part of the growing movement fighting for our iconic salmon, join tribal leaders, salmon advocates, and keynote speaker Winona LaDuke at the fourth annual “Free the Snake Flotilla” near Lewiston, Idaho, on September 8.