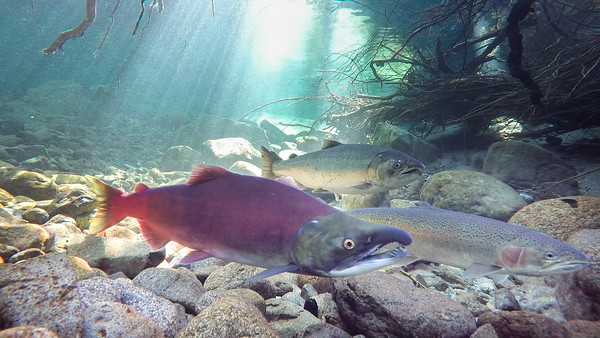 If the people of the Northwest are not careful, the region could see something our ancestors would have thought inconceivable: the Snake River’s last salmon.

The Great Spirit made the waters here to teem with fish. For thousands of years, both of our Tribes – the Jamestown S’Klallam on the Olympic Peninsula and the Nez Perce across the Columbia Basin – have enjoyed salmon as the center of our diets, cultures, economies and spiritual lives.

Earlier this month, Republican Congressman Mike Simpson put forth a proposal that represents the best chance we’ve seen in years for restoring salmon to harvestable numbers.

Not a day goes by that we’re not thinking about the future of the fish, of our people and of this region. We’re honored to serve on the U.S/Canada’s Pacific Salmon Commission , a regulatory body that manages and restores salmon stocks in the Northwest.

More important, we’re each members of families. We’re great-grandsons, grandsons, sons and fathers. One of us is a grandfather.

And we’ve made a promise to those ancestors who came before us, and to those who will come in the future: The last salmon is not going to happen on our watch.

Throughout the Northwest region, we see people, like Rep. Simpson, coming to the same conclusion. They see that decades of failed federal plans, and $17 billion spent, have not restored abundant, harvestable salmon to the Snake River. Some species of salmon have nearly disappeared from their icy spawning grounds in Idaho.

Chinook and sockeye salmon are among the most resilient fish on the planet. They grow mighty, spending years in the Pacific, as far away as the Gulf of Alaska. Some of them return to mountain streams more than 7,000 feet above sea level.

But salmon weren’t meant to cross so many dams, which interrupt their migrations and warm the waters to dangerous, fish-killing temperatures.

The proposal from Rep. Simpson includes funding for removing the earthen portions of four dams on the lower Snake River that have the greatest harmful impacts on salmon, steelhead and lamprey. Tribes across the Northwest have praised the proposal as an important step forward in restoring the Snake River and our salmon. Many have worked for decades to bring salmon back to abundance in the Columbia Basin.

This new proposal would fund habitat and fish restoration throughout the basin.

We believe it’s a bold opportunity to strengthen communities and economies.

We are not opposed to growth or development. The Northwest tribes are supportive of balance on dealing with growth and protection of our precious resources. We cannot support sending salmon to extinction in this region and call that growth. That’s not a good trade-off. That’s death to an essential Northwest resource preserved in our treaties.

For Northwest Indigenous people, salmon extinction can be literal death to our cultures and people. There’s a correlation between the dwindling salmon – our staple food source – and increasing health problems. Fewer fish means more heart disease and diabetes.

Leaders in public office, in business, in communities now recognize that we’ve tried unsuccessfully to restore the Northwest’s most iconic species through every method – except removing the lower Snake River dams.

Rep. Simpson’s proposal would ensure the benefits the dams have brought – like clean power, irrigation and transportation – would continue through new means.

We empathize with farmers who say their way of life also needs to be protected.

That is the same position and principle of the tribes in the Northwest.

It’s time now for tribes, members of Congress and governors to engage with this new proposal. We should evaluate it and offer our own ideas for how to make it stronger so all communities prosper in the future before us.

It takes all of us. In the end, this shouldn’t be “the Simpson proposal,” but the “Northwest proposal.”

Salmon used to muscle their way upstream by the millions. The treaty rights of Indigenous people in the Northwest assured we would always have access to them. We secure that specific right to the fish because salmon are essential to our ways of life.

We can’t bring salmon back in those sustainable numbers of the 19th and 20th centuries, but we can bring them back in harvestable abundance.

We can only accomplish that goal by removing the dams, and continuing habitat restoration once they’re out.

It’s what our Northwest treaties have promised, and it just makes good business sense across the Salish Sea. More salmon in the Snake means more salmon in the Pacific and the Columbia Basin. It means more money in communities from tourism, recreation and revitalized waterfronts.

It’s the just and the right thing to do. It’s the strategy and pathway the Northwest region can fulfill its treaty promises and accommodate growth.

We’ve made our promise to our future generations. We cannot support any more degradation of our salmon.

W. Ron Allen is chairman and CEO of the Jamestown S’Klallam Tribe. McCoy Oatman is a former member of the executive committee of the Nez Perce Tribe. They are members of the U.S. delegation to the Pacific Salmon Commission.