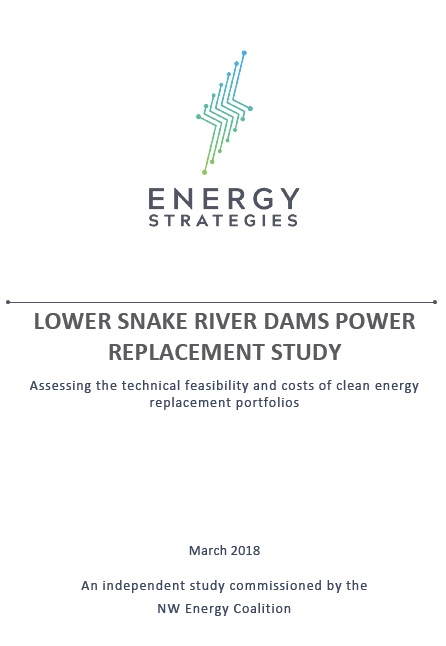 A new study commissioned by the NW Coalition shows that the ongoing decline in wind and solar energy prices can not only contribute to a cleaner environment, it may help save Northwest salmon and orca whales that are threatened with extinction.

The Lower Snake River Dams Power Replacement Study – the most extensive yet undertaken on the subject – shows that power from the Ice Harbor, Lower Monumental, Little Goose and Lower Granite dams can be affordably replaced by a mix of energy efficiency measures and renewable energy resources without compromising electric-system reliability and with little or no increase in greenhouse gas emissions. In fact, electric system adequacy, reliability and flexibility would actually improve.

These findings put to rest the decades-old myth that we have to choose between clean, affordable, reliable energy on the one hand and the recovery of salmon populations on the other.

That’s quite a deal when you also consider the business opportunities arising from the build-out of new renewable resources, the shot in the arm that dam removal would give to our fishing and tourism industries, and the new tax revenues that would flow to local governments from private-sector solar and wind facilities.

In short, power replacement would primarily be a market-based solution that would benefit businesses, workers and communities as well as salmon and the environment. A win all around.

That’s why it’s disappointing that the ostensibly business and market-oriented Washington Policy Center has come out as the study’s severest critic. In an April 8 Spokesman-Review article (“Life without Snake River dams”), Todd Myers of the Washington Policy Center claimed that the transition to private-sector wind, solar and energy efficiency would be too large and too costly.

Yet those familiar with power resources know that the Northwest has the largest potential for wind development in the nation and far more solar potential than the amount called for by the study. Meanwhile, in recent years, many states – Texas, Oklahoma, Iowa and California among them – have replaced old energy sources with new renewables on a larger scale than is required to replace power from the Snake River dams.

Also, while the study estimates the average cost to Northwest households to be a little more than a dollar a month, the figure could turn out to be even lower if the future price for wind and solar turns out to be less than the conservative assumptions of the study.

Additional savings may also be realized because a 2015 study showed that the cost of removing the dams would be more than offset by the savings of capital expenditures for ongoing dam maintenance and fish recovery programs. And a recent poll showed a majority of Washington voters would be willing to pay far more than a dollar a month to restore wild salmon and improve water quality. Most also said they support removing the four lower Snake River dams in order to save salmon and orcas.

Finally, Myers argues that the transition to new renewable resources would greatly increase greenhouse gas emissions. While it’s possible that electric system emissions could go up by less than 1 percent due to supplemental market-based purchases by utilities, it’s equally true that emissions could decrease by as much as 2 percent depending on state environmental policies.

We should also remember that Myers raised the same kinds of objections a decade ago, when Washington voters approved ballot Initiative 937 requiring utilities to increase energy efficiency and the use of new renewables. At that time, Myers wrote that passage would cause our utility bills to double and cost Washington thousands of jobs.

Instead, in the years after we passed I-937, utility rates grew at less than the rate of inflation and clean energy businesses became one of the fastest-growing and biggest job-creating sectors of the state’s economy.

You can see the Lower Snake River Dams Power Replacement Study and summaries of its findings at www.nwenergy.org/lsrdstudy. Please take a look and then reach out to state and federal policymakers and ask them to explore the study and embrace this new opportunity to solve a decades-old problem.

Nancy Hirsh is executive director of the NW Energy Coalition.