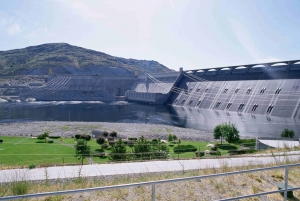 orty years ago one of the big ongoing news stories, and one of the big serious issues, facing the Northwest was the impending shortage of energy supply. We just weren’t producing enough electricity, we were told, to satisfy the growth needs of the region.

All sorts of things happened in those years in an attempt to deal with this problem, not least the massive nuclear power building in Washington state (remember the wonderfully-acronymed WPPSS?) that resulted in economic collapse and massive debt.

What never did happen was this: The Northwest never did run out of power.

Idaho, Washington and Oregon have kept on growing, economically and demographically, in the years since, and adequate supply of electric power has never been a significant problem. Neither, for that matter, has cost; juice has been about as inexpensive in the region through these years as it has anywhere in the country.

One of several reasons for that has been the existence, for 80 years so far, of the Bonneville Power Administration. Headquartered at Portland, the BPA has the job of taking the immense amount of electric power generated by the federal dams in the Columbia River system and selling it to customers, mainly regional and local utilities. Idaho utilities get some of this power, and the state benefits more broadly from the way the cheap hydropower has helped keep electric rates low.

Political threats to BPA’s existence have surfaced from time to time – there’s been a rumbling from the Trump Administration most recently – but the most immediate and maybe most intractable threat right now is economic. It comes not from anyone trying to do it in, but from broader conditions.

These are laid out in a fascinating short report by Idaho economist Anthony Jones and activist Linwood Laughy (he was involved in the Highway 12 megaload battle), who with several others began looking into the economic changes surrounding electric power in the Northwest. Their report (you can see it at http://rmecon.com/examples/BonnevillePower%20May%202018.pdf) concluded that BPA could be facing extinction unless something dramatic changes.

They’re not alone in issuing warnings. Elliott Mainzer, BPA’s current administrator, warned in March, “We’ve taken huge hits in the secondary revenues market just like every other hydro provider up here, with cheap gas, low load growth, and the oversupply conditions. It’s been a bloodbath for folks in the wholesale market. I’m not in a panic mode, but I am in a very, very significant sense of urgency mode.”

That concisely lays out some of the issues. Oversupply – of electric power – has become real, as solar, wind and other power sources have become major factors in the Northwest. As supply has grown, prices have fallen. The big drop came around 2008 and 2009, when “the open market price of power dropped from $90 to $25.” It has not much rebounded in the years since. The declining need for additional power already has reduced the use of coal-fired plants in the region.

BPA has been protected somewhat by long-term contracts with many of its utilities, but some of those utilities are agitating for lower prices from other sources, and negotiations are likely to be fierce as contracts come up for renewal. Traditionally, BPA has made money by selling excess power to California, but California also is seeing a massive increase in renewable energy: It is being flooded with additional power as well. Meantime, BPA has a number of costs, from environmental requirements to pension funds to compensation for dam maintenance, that it cannot reduce. It is being squeezed, hard.

That started about a decade ago, and there’s an easy way to measure it. In 2008 BPA had financial reserves of almost $1 billion; now, only about $5 million of that is left, the rest of it gone to pay for costs when income hasn’t kept up.

The Northwest energy world has been turned on its head since those energy-shortage days of 40 years ago. It may look a lot different a decade from now.