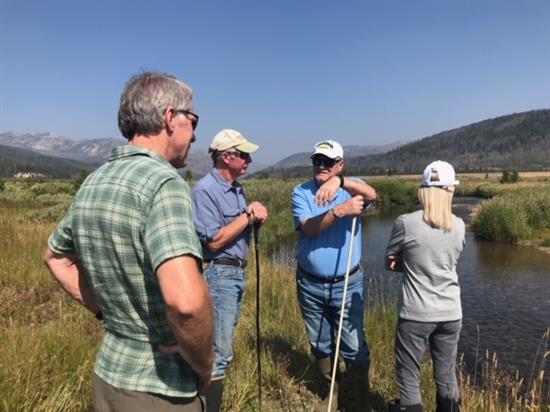 Washington, D.C. — Steve Hartgen’s recent comments on my concept to solve Northwest salmon, dam and energy issues caught me a bit by surprise. I have great respect for Steve. I consider him a friend, someone I can count on for sound advice and an open mind.

Steve is right, $33 billion is a lot of money to spend if the dams are removed, but that is what they are worth. These dams provide significant benefits for energy, transportation, producers and communities. People must understand that if they are removed, all stakeholders must be compensated in order to create their own solutions.

I also agree with Steve’s statement that we have spent $17 billion on salmon recovery “with virtually no success.” However, if we take Steve’s approach of stay the course, we may as well throw $33 billion at salmon recovery with almost no certainty of success.

I believe that $33 billion is better spent on producers, dairies, water quality and storage, replacement energy, and communities and “real” salmon recovery, rather than leaving it to the courts. I am certain the courts will force spending of exponentially more dollars and require more spilled water to save Idaho’s last endangered wild Idaho salmon. In my opinion, this money is much better invested in people and jobs.

Steve makes light-hearted jokes about the Endangered Species Act (ESA) protecting wooly mammoths and other long extinct animals, but he ignores the fact that environmental groups have used the ESA and the Clean Water Act to delay and halt resource-based industries.

We saw the devastation to jobs, mills and communities in the northwest with the spotted owl war. Environmentalists are continuing to tie the courts up in litigation over these dams to ensure that Idaho’s salmon do not join Steve’s list. The most recent environmental impact statement has already been appealed by multiple parties.

I am standing up for stakeholders and Palouse producers by demanding the benefits of these four dams be replaced if they are to be removed. Look no further than the Klamath Basin where they are removing four dams after court battles, are those producers getting their full benefits?

Steve says removing the dams will not save wild Idaho salmon.

Fish biologists tell me that wild John Day River salmon that pass through three dams have a smolt to adult survival ratio of around 4%, meaning for 100 juveniles that leave for the ocean, four return to spawn. This is sufficient for salmon to replace and sustain their populations. It is the same for the mainstem Columbia River salmon that go through four dams at 4% survival. Wild Idaho salmon are different, when 100 wild Idaho juvenile salmon leave our mountains for the ocean, only one returns to spawn. I am told this 1% number for wild Idaho salmon and steelhead does not even meet replacement levels and is a certain path to extinction.

Idaho salmon experience the same ocean conditions and pass through the same Columbia River dams as the John Day and mainstem Columbia wild salmon. The only explanation I have is that passing through four extra dams as they go to and from the ocean, is taking a greater toll on our wild Idaho salmon and steelhead.

Steve makes an unusual statement that my concept would “dry up Southern Idaho farmland”. He must know that our producers already have an agreement to send up to 487,000-acre feet down the Snake River that helps “flush” salmon through these four dams. If the dams were gone, perhaps we could instead be farming tens of thousands more acres with this water instead of flushing it for salmon.

I want to be clear regarding Idaho water, my concept does not alter this and intentionally remains silent on the Snake River Basin Adjudication Agreement- it remains in place. If producers wanted, this could be an opportunity for them to extend and expand legal certainty for the Upper Snake to reflect the increasing value of Idaho’s water.

Steve seems happy to roll the dice for thousands of Idaho families and refuses to discuss a possible solution to end the ongoing chaos and uncertainty over dams, salmon and energy. It is very easy to tell people that ideas like mine are folly and assume that salmon will not go extinct and no judge or future administration will ever change the operations of the Lower Snake River dams. People told the timber families and Klamath producers the same, ‘if you just fight, you can beat the ESA and judges.’ They were wrong. My concept provides the economic certainty and security that producers and stakeholders tell me they want.

It may remove the four most controversial and harmful dams in the system, but it locks in all the remaining major dams for decades and ends lawsuits against agriculture for decades. There will be no slippery slope of continuous lawsuits seeking to remove one dam after the other and we can have legal protections for Northwest producers and stakeholders.

Unfortunately, it is the lack of vision like Steve’s that lead to the impending crises we find ourselves in today. I welcome you to read my concept and provide me with your feedback. You can find it at https://simpson.house.gov/salmon.