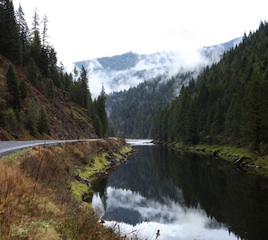 Friday U.S. District Judge B. Lynn Winmill put a hold on General Electric's second evaporator, which was supposed to leave the Port of Lewiston today bound for the tar sands of Alberta.

Then he stripped Idaho of its control over that and future megaload shipments along U.S. Highway 12 - and handed it over to the U.S. Forest Service and the Nez Perce Indian Tribe.

Let it sink in.

The state of Idaho no longer controls its only highway linking Lewiston to Lolo, Mont.

You don't see that every day.

Here's what it took:

Winmill ruled earlier this year that because 100 miles of the route is located within the Lochsa and Clearwater river corridors, the Wild and Scenic Rivers Act of 1964 applies.

Said Winmill: The Forest Service was duty-bound to determine whether a rolling roadblock was consistent with the values of the federal law - protecting "esthetic, scenic, archeologic and scientific" features.

The Nez Perce Tribe got involved. As was the case a generation earlier when the Shoshone-Bannock Tribes blocked nuclear waste shipments across its Fort Hall reservation, the Nez Perce's opposition to the megaloads was crucial.

It put the Forest Service on the spot.

"... The megaloads at least had the potential to be 'detrimental to the protection and preservation of Indian tribes' religious and cultural sites and practices and treaty rights,' " Winmill wrote. "All of this triggered a duty on the part of the Forest Service to consult with the tribe. A meaningful consultation takes place 'typically before undertaking a course of action."

Nez Perce-Clearwater National Forest Supervisor Rick Brazell finally acknowledged that the federal law and Winmill had indeed given him the authority to act - after he vacillated on that point for several weeks.

" ... The agency believed it had no authority to enforce, an erroneous reading of the court's opinion," Winmill wrote. "... It appears the Forest Service revised its position and is now correctly interpreting the court's earlier position."

Shippers and the mega corporations employing them - ExxonMobil, Conoco-Phillips and GE - let nothing, bad weather, challenging terrain, public opposition and federal law, interfere with their ambitious plans. Megaloads were not new to U.S. 12. Nobody blanched when 95 oversized loads - wide enough to block traffic in both lanes - crossed the river corridor highway during first decade of the 21st century.

When ExxonMobil planned to send more than 200 megaloads down that road on a timetable, people who had never heard of a megaload - tribe members, conservationists and river corridor residents - got busy. They asked questions. They pushed for public hearings. They protested. And they went to court.

All it took to set this combustible mixture on fire was inept political leadership.

Rather than sifting through the facts and seeking out public sentiment, Gov. C.L. (Butch) Otter was the first to welcome the megaload transporters to Idaho.

Instead of seeking a practical ceiling on the number of megaloads - perhaps four to 10 during a year - the river corridor could accommodate, Otter and the ITD approved any project that came their way.

Even when Winmill's ruling empowered the Forest Service to consider a much wider scope of review, ITD stuck to its guns and issued GE's transporter Omega Morgan a permit.

"To buy time, the Forest Service asked the state of Idaho to wait for that review before granting any permit," Winmill wrote. "The state ignored that request."

Whatever the reason, the people responsible for Idaho's highway system have been sidelined on the megaload mess. They have nobody to blame but themselves. - M.T.