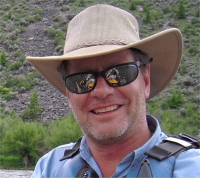 The livelihood of my family is heavily dependent on free-flowing rivers and wild fish. I chose to leave a 25-year career in Commercial Construction and Development in favor of designing and marketing Streamtech Boats, a custom river fishing and expedition drift boat. Selling my watercolor paintings and landscape photography makes up the balance of our humble income. As such, the plight of our wild rivers and the wild salmon and steelhead that depend upon them is paramount in our world.

My father was a guide and instilled in me a grand love and respect for rivers, fish and natural environments. In a world facing relentless expansion of population and the corresponding relentless expansion of extraction operations that are required to support them, I fear for the wild places and the wild creatures that inhabit them. At the top of that list of wild creatures I fear for are the wild salmon and steelhead of Idaho that were, not long ago, part of the largest run of salmon and steelhead on Earth in the Columbia River Basin.

Let that sink in. Then consider, as I have, that the runs now are less than 5 percent of their historic levels. There are various reasons for this, but primary among them is Man. We built dams that stopped the fish. We also engaged in a host of other development activities that have put these fish in danger of extinction, but dams are the key problem for the fish. At the time the dams were built, it was a time of great engineering advancement.

Wars, the Great Depression and major technological advancements in machinery made the possibility of capturing the power of our great rivers irresistible. We even had competition between the Bureau of Reclamation and the Army Corps of Engineers to see who could build the most and biggest dams. We went too far. Way too far. Having educated myself on the topic and focused on the positions of environmental groups as opposed to the operators of the dams, it is clear to me that our wild fish are in grave peril of extinction. Fisheries science study after study confirms that the only viable way to ensure Idaho’s wild fish do not go extinct in the near future is to remove some dams.

Specifically, the four dams on the lower Snake River. That is a tall order in a world where statements have floated about like “there was never a dam that was not worth building” and “we are in the business of erecting dams, not removing them.”

Let’s face it, the federal government put a huge amount of effort into building the dams and the last thing they want to do is remove any.

So, I attended meetings on the topic. I went to rallies. I read articles. I spent countless hours working to understand the situation. From all I have learned, it is clear to me that the lower four dams need to be removed. The wonderful thing about that is not only is it the right thing to do for the fish, but it is also the right thing to do for the taxpayers. The lower four dams produce a tiny fraction of the power produced in the Northwest. They used to act as locks for an inland port in Lewiston but that function has mostly gone by the wayside with very few users. Essentially, they are low value assets that come at a devastating cost. The lower four dams kill the vast majority of the young fish trying to migrate to the Pacific Ocean. They are extraordinarily effective fish killers. And to top it all off, they are very old and in need of hundreds of millions of taxpayer dollars for maintenance and upkeep. In other words, they produce very little and are the key element in driving a once magnificent run of wild fish extinct. Enough, I say. Remove them.

Mankind has done great damage to the natural world and it seems that reversing the damage where it makes good sense is not so much to ask. Wild fish once flourished in Idaho and now they hang to a thread of survival. Their decline negatively impacts the entire ecosystem of the Northwest and even endangers the survival of orcas. It is time to do the right thing and save them while there is still time. Remove the lower four dams on the Snake River now. Link Jackson is a Boise artist, photographer, boat designer and outsdoorsman. He describes himself as a fiscal conservative and social libertarian.