Idaho Statesman Editorial: Idaho salmon: The $9,000 sockeye? There is a better answer. 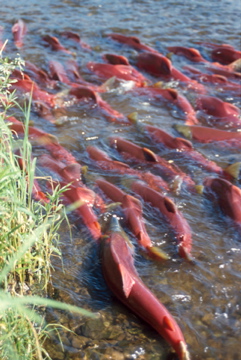 Compared to Lonesome Larry — who swam from the Pacific Ocean into legend two decades ago — today’s Idaho sockeye have a lot of company.

In 2012, 243 sockeye salmon made the improbable trip to Central Idaho’s Redfish Lake, following the migration route Lonesome Larry traveled alone in 1992. Returns topped 1,000 apiece in 2010 and 2011.

This considerable improvement has come at a considerable cost — calculated by the Seattle Times at $9,000 per fish since 1991.

The money has come from ratepayers who purchase electricity from the Bonneville Power Administration. The money has gone largely into hatchery programs to keep the sockeye from swimming ever closer to extinction.

But the sockeye have not recovered, in a legal or in a biological sense. They remain on the federal government’s endangered species list, where they landed one year before Lonesome Larry’s return home. And even the strongest sockeye returns pale in comparison to recovery goals: annual runs of 2,500 wild sockeye.

Idaho’s sockeye have only begun their long journey back.

Without the hatchery programs, the wild sockeye’s genetics could have been lost to the ages — and with that, Idaho could have lost a storied species and an irreplaceable component of its mountain ecosystem.

But while the hatcheries have their role, they also have their limitations. Hatcheries do not replace wild and naturally spawning sockeye. And despite the cost to ratepayers, hatcheries allow the region’s policymakers to comfortably avoid the more difficult decisions about salmon.

That most difficult, but most sustainable decision: breaching the four lower Snake River dams in eastern Washington. Since 1997, we have advocated dam removal as the best, and perhaps only, way to recover Idaho’s wild salmon and protect Idaho’s water users.

But there is an another advantage to breaching: It can eliminate the need for costly hatchery programs. Hatchery breeding is not true recovery. And at $9,000 a fish, it is not sustainable.