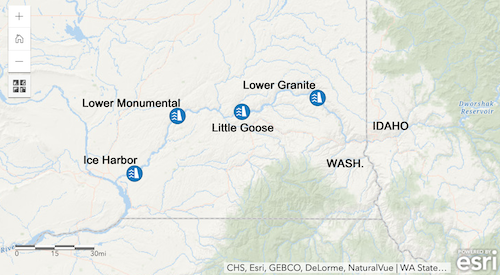 After more than two decades of debate, a litany of studies that always seemed to come to the same conclusion, $17 billion in marginally successful mitigation efforts and still a declining population of salmon in Idaho, we have a new way forward, a way to save the salmon.

And it’s a solution that’s been there all along: removing four dams in the Lower Snake River.

But we have even more than that.

A $33 billion proposal from U.S. Rep. Mike Simpson, R-Idaho, seeks to make all the parties involved whole — farmers who irrigate their crops, communities that rely on electricity from the dams, shippers, cities, American Indian tribes and more.

Making those parties whole is necessary to make this plan work.

Simpson’s proposal makes sure that Idaho communities and businesses will benefit, from Lewiston to Twin Falls, up the Salmon River, and even Idaho Power and electric co-op customers.

We now have a serious, thoughtful proposal that includes everyone affected by removal of the dams and answers the question, “How do we move forward?”
A long fight over dams

In 1997, the Idaho Statesman editorial board made a compelling argument for breaching the Lower Snake River dams.
The Idaho Way newsletter

More than 20 years later, that argument remains compelling, and we see no reason to change course.

“Four dams in Washington are holding Idaho’s economy hostage,” according to what were prescient words from that editorial. “The dams on the Lower Snake River once provided cheap power and hope for economic prosperity for Lewiston. But now these dams are a burden on Idaho and the Northwest. The region won’t be set free until the salmon and steelhead these dams kill are recovered and balance is restored to our economy, environment and culture.”

The arguments made then remain the same today.

The challenges and extraordinary efforts to try to get the salmon and steelhead around the dams are becoming oversized when we begin to compare them with the efforts it would take to mitigate the effects of breaching the dams.

The issues of power generation, irrigation and grain transportation become eminently surmountable when we look at them in the context of the Herculean efforts we’ve put forth trying to get fish back to Idaho spawning grounds.

Increasing spill at just the right times, creating fish ladders, even barging fish around the dams, will seem so ridiculous compared with the relatively simple solution of breaching the dams.

Simpson’s comprehensive proposal has been a long time coming, and we hope it comes just in time to save the salmon. We do not want to have to explain to our children and grandchildren why the Salmon River and the town of Salmon are named after a fish that no longer exists. We do not want to explain how Redfish Lake got its name, but of which we no longer see any evidence.

We do not want to explain that it was our generation that killed the last of a once-mighty population of chinook and sockeye salmon, and even steelhead.

Salmon have myriad other challenges in their seemingly impossible life journey of traveling thousands of miles of rivers to the Pacific Ocean, only to swim back up those same rivers to spawn in the same rock beds where they were born.

“I want to be clear that I’m not certain removing these dams will restore Idaho salmon and prevent their extinction,” Simpson said in a video press release. “But I am certain if we do not take this course of action, we are condemning Idaho salmon to extinction.”

The timing of this proposal is fortuitous. With a new administration friendly to environmental concerns and now both chambers of Congress controlled by Democrats, chances of passage are much greater today than they otherwise would have been.

It’s important to strike while the iron is hot, and Simpson is the right person at the right time to carry this to the end.

A Republican who comes from the long tradition of Western lawmakers with a strong commitment to the environment and the outdoors — both in Idaho and across the West — Simpson is perhaps the best person to move this forward.

Simpson is the architect and driver of wilderness protection for the Boulder-White Clouds mountains in Central Idaho in 2015. He also championed the Great American Outdoors Act that protected funding for the Land and Water Conservation Fund.

He has long been seen as the barometer for protection of salmon and the possible removal of the dams. Just by merely suggesting two years ago “what if” we removed the dams, Simpson sent ripples throughout an environmental community eager to make its case and bring an ally to its side.

We likely are never going to have as much clout again from the Pacific Northwest as we have today, with like-minded, environmentally conscious lawmakers on both sides of the aisle from Idaho, Washington and Oregon. With this proposal coming from an Idaho Republican, we hope that Washington and Oregon Democratic lawmakers, whose constituents include strong environmentalists, will take the same thoughtful approach when considering this considerable package.

We recognize the sizable cost of this proposal. With a regular annual federal budget deficit of $1 trillion — and even more because of the pandemic — $33 billion is an outlay that we would be passing down to future generations.

However, rather than passing down a bill to pay for current services, this proposal is paying for something that will be enjoyed by future generations. If ever there were a legitimate reason for deficit spending, this is it. We hope Simpson’s fellow Idaho delegation, Sens. Mike Crapo and Jim Risch and Rep. Russ Fulcher, can agree.

The laundry list of long-lasting benefits is significant, including billions of dollars to replace power lost by removing the dams, to help farmers and to make needed power grid upgrades. It even includes a new Snake River Center for Advanced Energy Storage at the Pacific Northwest National Laboratory in Tri-Cities and the Lewiston-Clarkston area, and includes money for waterfront rehabilitation, economic development, tourism and transportation. Such a large-scale undertaking would create jobs.

We support this bold proposal, and we encourage other members of the Idaho congressional delegation to support it, as well.

The time is right to remove the dams, as the Statesman has been calling for since 1997. This proposal is the right approach, as it includes everyone affected. The bottom line is that if we wait much longer, we might not have any salmon left to save.