Resumed talks may bring a final answer to assessing the balance of what the dams provide and cost. 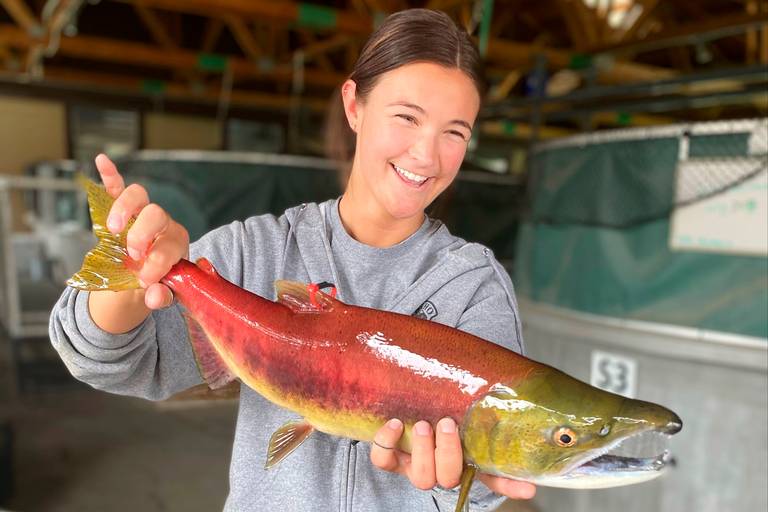 Even after the “final” determination in 2020 by three federal agencies that removing four hydroelectric dams in Washington state wasn’t necessary to ensure the survival of salmon and steelhead on the Columbia and Snake rivers, breaching the dams is again on the docket.

Earlier this month, U.S. Sen. Patty Murray, D-Wash., and Gov. Jay Inslee, announced a joint federal-state process on Snake River salmon recovery that will include consideration of breaching the four Lower Snake River dams, situated in southeast Washington between the river’s confluence with the Columbia River near the Tri-Cities and the Idaho border.

Without prejudging a conclusion, the pair committed to a process to determine whether there are “reasonable means for replacing the benefits provided by the Lower Snake River dams,” that would justify the dams’ removal as part of a strategy to aid recovery of salmon that depend on the greater Columbia River basin.

Thirteen runs of salmon are currently listed as endangered or threatened species; four of them return to the Snake River to end and begin their life cycle.

Breaching the dams remains up for discussion because — despite long-standing and more recent efforts to mitigate the effects of the dams through hatchery programs, habitat improvement projects, increased spills of water to aid in fish migration and even transporting fish around the dams and their churning turbines — the outlook for salmon, steelhead and more has yet to show much improvement, if not continued decline.

Reports from state, federal and tribal agencies found that returns and estimated returns for spawning chinook and sockeye salmon and steelhead were predicted to be lower this year than their ten-year averages for the Columbia; 1.14 million chinook and sockeye for 2021, compared to 1.35 million in 2020. Coho salmon were the one bright spot, forecast to see a return of 1.59 million fish this year, compared against 363,000 in 2020.

The same report found little improvement for the Snake River, itself, with estimated return of chinook salmon this year well below the river’s 10-year averages for wild and hatchery fish.

The state Department of Fish and Wildlife, noting record- and near-record lows of returning steelhead in September closed steelhead fishing on the stretch of the Snake on which the four dams sit.

Removal of the dams is seen as the most effective way to save and rebuild declining runs of the fish on which tribal, sport and commercial fishing depend, as do the state’s orca whales, also an endangered species, which exclusively eat salmon and spend part of the year at the mouth of the Columbia feeding before returning to Salish Sea waters in Northwest Washington.

Only 73 Southern Resident orcas remain, down from more than 90 in the mid-1990s. And while three whales in one of three pods that spend time in the Salish Sea are now pregnant, there’s been a high rate of pregnancy failure among the Southern Residents in the last decade. The whales’ failure to rebuild their numbers has been blamed on shortages of their preferred prey — salmon — and on pollution and vessel noise and traffic.

Removing the dams, however, won’t come without inflicting pain, specifically for the West’s electricity rate-payers and the state’s economy, especially the state’s southeast region.

What the process that Murray and Inslee have outlined should allow for an analysis of available data that determines whether what the Lower Snake dams provide can be affordably replaced or if there are better options for ensuring the survival of salmon, steelhead and orca.

At least one recent report, however, questions whether the dams aren’t already costing the state and the region more than they are worth.

A 2019 report prepared by EcoNorthwest for Vulcan, Inc., founded by the late Microsoft co-founder Paul Allen, took a cost-benefit look at the dams, what they provide, what it would take to replace their benefits and what might be gained by their removal.

The report’s conclusion: “The results of the analysis suggest that society will incur some costs from dam removal due to lost barge transportation and effects on (electric) grid services, but the public benefits relative to costs strongly justify removing the Lower Snake River Dams.”

Among the reports findings:

While the loss of electricity generated by the dams is substantial and ensures power reliability, it represents a small share of the Northwest’s power needs and generates less power than what is exported to California and other regions. The power could be replaced, potentially by solar and wind projects, either in the Northwest or in California, though the study notes the potential for increased carbon-dioxide emissions if fossil fuels are used for generation.

While barges, which depend on the dams’ locks, offer low-cost shipping, that comes at the taxpayer expense of a federal subsidy for maintenance of the locks. Transportation by rail and truck would cost shippers more, but what the federal government spends is more than the public gets back, the report finds. Again, carbon emissions would increase with more truck and rail use.

Regarding irrigation, it would cost about $200 million total to replace and upgrade existing pumps, intakes and other irrigation infrastructure, an amount that would be worth the investment and keep much of the region’s agricultural land in production.

What the report also takes into account — and what the 2020 federal analysis didn’t — are the values to the Northwest in saving salmon and steelhead from extinction, preserving recreational and commercial fisheries and developing the Snake’s recreational opportunities, even restoring whitewater stretches of the river.

Taking all into account, the report concluded, removal of the dams and restoration of 140 miles of the Snake River would create a net increase of more than 300 jobs annually in the region and provide a net benefit of $8.65 billion to the economy — after paying to remove the dams and replacing what they provide.

Among the proponents of dam removal has been U.S. Rep. Mike Simpson, R-Idaho, who earlier in the year had hoped to address some of the costs and impacts of dam removal by including a $33.5 billion spending package as part of President Biden’s Build Back Better social infrastructure budget. Neither Murray nor Inslee, earlier this year, supported inclusion of Simpson’s proposal in the spending plan, but sought further “science-based and community-driven discussions” regarding the river, salmon and steelhead.

Those discussions have now resumed, but are on a relatively tight timeline with recommendations due no later than July 31, 2022. That deadline would allow salmon recovery work to be included in the Army Corps of Engineers 2022 Water Resources Development Act, including funding of analysis by federal agencies for breaching the dams.

Recognizing the continued decline for threatened and endangered species — salmon, steelhead and orca — the additional uncertainty imposed by climate change and its threats from increasingly warmer summers and changes in precipitation and the mountain snowpack that feed the Columbia Basin’s rivers and tributaries, discussion — and some definitive responses — are now necessary.

Washington residents — on both sides of the Cascades — should not retreat from this discussion out of fear of change.