Eugene Register-Guard Editorial: A damming proposal - Congressional bill is not a good option 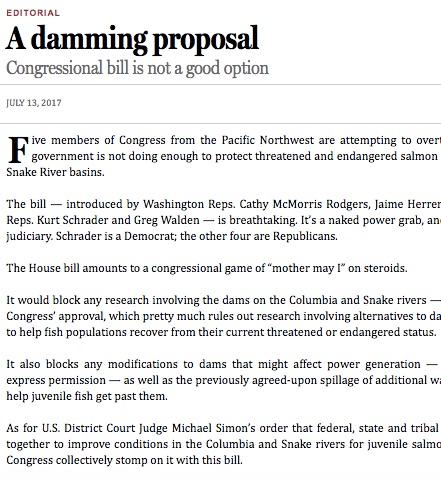 Five members of Congress from the Pacific Northwest are attempting to overturn a court order that found the federal government is not doing enough to protect threatened and endangered salmon and steelhead species in the Columbia and Snake River basins.

The bill — introduced by Washington Reps. Cathy McMorris Rodgers, Jaime Herrera Beutler and Dan Newhouse and Oregon Reps. Kurt Schrader and Greg Walden — is breathtaking. It’s a naked power grab, and a thumbing of congressional noses at the judiciary. Schrader is a Democrat; the other four are Republicans.

The House bill amounts to a congressional game of “mother may I” on steroids.
It would block any research involving the dams on the Columbia and Snake rivers — or removal — without Congress’ approval, which pretty much rules out research involving alternatives to dam removal and options to help fish populations recover from their current threatened or endangered status.

It also blocks any modifications to dams that might affect power generation — unless Congress gives express permission — as well as the previously agreed-upon spillage of additional water over these dams to help juvenile fish get past them.

As for U.S. District Court Judge Michael Simon’s order that federal, state and tribal fisheries experts work together to improve conditions in the Columbia and Snake rivers for juvenile salmon, the five members of Congress collectively stomp on it with this bill.

Removal of dams on Northwest rivers has long been a hot-button issue. It took 25 years for advocates of free-flowing rivers to gain the necessary approvals for removal of four dams in the Rogue River basin. Once the dams were removed, however, salmon and steelhead began returning to the rivers as artificial barriers and built-up sediment were removed and temperatures fell. And there was no shortage of power as a result, which should not have come as a surprise since one of the dams was no longer providing any power and a second was providing only a tiny amount.

Last year, Oregon’s U.S. Sens. Ron Wyden and Jeff Merkley applauded Interior Department Secretary Sally Jewell’s support for the removal of four dams along the Klamath River, another crucial step in dealing with the complicated issues of water and power, balancing the needs of the fishing and outdoor recreation industries, farmers and ranchers, environmental protection and native American tribes and other nearby residents and businesses.
As dams have aged, requiring massive amounts of investment to both repair them and bring them up to current safety standards, there has been increased interest in considering removal of some of them — particularly when other, more efficient options for providing power become available.

There also has been general agreement that this is not something that should be done without careful study and research into options and impacts.

The point is, the people most directly affected by rivers and dams have had some success in dealing with issues related to them and working on plans and compromises to figure out how best to meet the needs of all the affected parties.

Why the five members of Congress chose to stomp into the middle of this issue with a hastily drafted, and draconian, bill is a mystery. They could hardly have picked a worse time — salmon runs are the lowest in decades, which is matter of some concern to people in the representatives’ districts.

This bill needs to die a quick death.