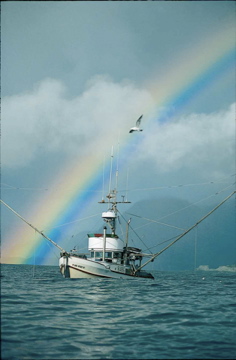 “North of Falcon” might sound like the title of a Hardy Boys adventure novel, but it is the key to real-life adventures for thousands of real people who fish in Pacific Northwest maritime and coastal waters.

The 2013 North of Falcon process was concluded last week at the Pacific Fishery Management Council’s meeting in Portland. Council members conduct weeks of meetings leading up to this decision each year, with PFMC staff putting in much additional preparation time. Interested parties avidly monitor the entire process.

The good news is there will be seasons for Chinook and coho salmon in the Columbia River, coastal watersheds and offshore waters. This has not always been the case and it is no small thing. For example, subject to change as salmon runs develop, the iconic Buoy 10 recreational salmon season will start on its traditional date of Aug. 1. Until Sept. 1, there is a daily limit of two salmon, only one of which may be a Chinook. Other opportunities continue through the end of the year.

However, the overall tenor of 2013 continues a long trend of essentially conservative seasons. Managers tend to react quickly to any negative trends, and slowly or not at all to unexpected strength in returns of hatchery-produced fish.

This is a result of the need to rigorously protect any possible wild salmon mixed among the returnees. Minimizing the number of endangered fish that are hooked and injured before being released dictates a degree of caution that can sometimes be agonizing to fishermen and the businesses that depend on them.

The worse news is that salmon returns continue to be little but a shadow of what they once were. The hydropower system, habitat degradation and barriers to passage, past management errors, ocean conditions and other factors all combine to produce seasons that are pathetic by historical standards.

Although she is most familiar with the situation around Puget Sound, comments by the Swinomish Tribe’s fisheries manager are relevant throughout the Northwest:

“Salmon habitat continues to be lost and damaged at an alarming rate, and this trend shows no signs of improvement. Every year it is increasingly difficult to develop fisheries that meet the needs of Indian and non-Indian fishermen while still protecting weak wild stocks. Conservative fisheries, such as those developed for this year, must go hand-in-hand with protecting and restoring habitat to return salmon to abundance.”

Fixing degraded habitat is far easier said than done. It requires money and cooperation. But there are positive developments. Watershed restoration and preservation are now very much on the agenda. They are forethoughts rather than afterthoughts.

Much has been lost that will never be recovered. But from a court order that requires significant culvert restorations in Washington to dam removals on the Elwha and Klamath rivers, incremental improvements are being made. These may or may not be enough to counteract damage elsewhere, but they are a start.