Crosscut: Why do we keep loving our orcas — to death? 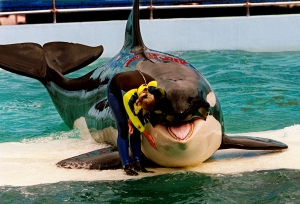 Why do we keep loving our orcas — to death?

Few books I’ve read recently have tapped into an intense inner rage — an old anger. But Jason Colby’s book, “Orca: How We Came to Know and Love the Ocean’s Biggest Predator,” published this month by Oxford University Press, is one of them.

Seattle played a huge role in turning orcas into celebrities and performers at marine parks, aquariums and oceanariums around the world. It was here in 1965 that the first captured killer whale was put on show for commercial purposes, at a small aquarium on Pier 56. That orca was given the name Namu, after the Canadian town where he was inadvertently trapped by fishermen.

He was purchased by the aquarium’s owner, Ted Griffin, who saw the commercial benefits of putting a “killer whale” on display. Indeed, he saw a market for capturing these creatures and selling them around the country. There was no law against it. In the times of declining fisheries, one could get $20,000 to $50,000 for an orca. At that time, as Colby points out, orcas were considered dangerous salmon eating pests by fishermen and most people, including scientists.

There was little understanding of them. So no love lost. Today, orcas are revered, but endangered. There is a movement to free Lolita, the famed orca snatched from Puget Sound in 1970 and still in captivity in Florida. Members of the Washington Congressional delegation — the Puget Sound Recovery Caucus —  have called for a resolution declaring June “National Orca Protection Month.” This on the heels of news that the southern resident orcas — the ones who sometimes grace Puget Sound with their presence and who are Lolita’s kin — are not only endangered, but dying off at an alarming rate, with starvation a major factor.  When Namu arrived in the summer of ’65, he was a sensation. People flocked to see him; I was among them. At first, he was kept in a small, swimming pool-sized pen next to the pier. He basically only had room to rise to the surface, breath, and sink slowly underwater again. I was no stranger to seeing orcas — I had watched huge pods traveling through the San Juan Islands.

I’d seen them surface right next to our small fiber-glass dingy and felt incredibly vulnerable. They were beautiful, scary and free to go where they wanted.

I understood the thrill of seeing an orca up close, but seeing Namu confined and, to my eyes, miserable, was a crime. This book reminded me of the anger I felt then, and that my mother felt too. She regard Ted Griffin as a criminal. One day driving along the waterfront, the orca capturer jaywalked in front of our car and my mother said she was tempted to run him down.

Colby’s book tells the brutal and enlightening tale of the era of orca captures, which lasted nearly a decade from the mid-1960s to the early 1970s on both sides of the border in the Salish Sea. Orcas had been the subject of some research at marine laboratories — dead specimens dissected by biologists. Little was known about their language, culture, families, personalities, behaviors. As orca capturing became popular, so did the scramble by men to find and sell orcas with little understanding of the impact on the whales. Mothers separated from children, baby orcas drowned, adults killed during capture due to cruelty, accident or incompetence. In the 1970s, some of the capture sites, like Penn Cove and Pender Harbor, were invoked like battlefields where humans and orcas were in conflict. Colby is an associate professor in the history department at the University of Victoria and was born and raised in the Northwest. He’s been in the commercial fishing industry and spent much of his youth on Bainbridge Island roaming the woods and beaches. His father participated in the captures for the last three Salish Sea orcas taken in that era, so the author has a personal motivation to explore the tragedy, but also to explain the context of the times and the complex motivations of some of the players. If the captures seem barbaric to modern sensibilities Colby points to a kind of silver lining. The captors were often motivated by money but some, like Griffin, were also animal lovers.

Griffin was one of the first humans to swim with an orca and have close contact. He bonded intensely with the animal. Others included university scientists who were motivated by research — a desire to study the orca’s language, social abilities and personalities.

The captures shed light on orca behavior toward one another, trying to save their young from captures, acting in concert, communicating. Some good came out of all that harm. Still, it wasn’t long after Namu came to town that people questioned what was happening. Protests started in 1965 by groups like PETA and accelerated as public opinion turned against the orca captors. The state and the U.S. eventually worked to eliminate capturing orcas and other sea mammals. The Marine Mammal Protection Act became law in 1972, dramatically altering the destructive attitude toward whales, orcas, fur seals and other critters that had been exploited for centuries. But here’s the sad part, according to Colby. If capturing and killing orcas led to a great human understanding of them and stimulated the public to love them, that love hasn’t put them on a path to health.

The southern resident population is declining because their main food source, Chinook salmon, is being wiped out. The great runs on the Columbia River have been extinguished by dams. Urban development is putting pressure on their habitats — more runoff, more marine traffic. Canada’s Trans Mountain pipeline project threatens the Fraser River Chinook population, one of the Salish Sea’s last major sources of food for them. In other words, while people want an end to the exploitation of captured orcas and want to free Lolita, while we condemn the behavior of people like Griffin, we humans are posing an existential threat to the species.

Namu taught us to love orcas, but not enough to change our ways. Namu did not last very long in captivity. They gave him a larger pen in which to perform, but in 1966, less than a year after his capture, he was found dead. The public was told he’d tried to escape and drowned. But a necropsy revealed he in fact died from a bacterial infection caused by sewage being dumped into the polluted Elliott Bay. We loved him, but killed him with our own shit.

Even though now we value orcas more as a regional symbol, orcas in the wild are still struggling to survive all these decades later. The captures of half-a-century ago were wrong, but the decline continues despite them. Affection is not enough.