Idaho Statesman: Chasing the salmon downstream to get an early fishing season 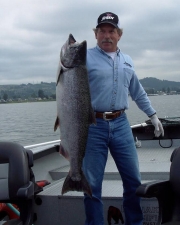 Paul Jewell’s rod jumped four times as we trolled the Sandy River just above where it emptied into the Columbia River only a few miles upstream of Portland.

Jewell, a college classmate of mine from Beaverton, Ore., followed the instructions of guide Brandon Glass, who said to give the salmon time to eat the herring with three hooks in it, pulled behind a large, bright, spinning flasher.

He set the hook. “Look at it go, look at it go,” one of our fellow anglers blurted out as the drag on the reel screamed when the salmon made his first run.

“Nice fish, Nice fish,” the angler continued as Paul kept his line tight during the fish’s quick changes of direction. The spring Chinook came close to the boat and we could see it had a dorsal fin, which meant it was wild and we would have to release it. “OK,” Glass said with a big smile on his face.

“Like in the first 20 minutes of fishing!” Paul carefully handled the 30-inch fish, holding him briefly for the camera then with one motion returned it to its home waters.

We were fishing the Sandy in 2017 because the Columbia was closed to fishing for spring Chinook, the most prized salmon in the watershed and among the most prized for table fare worldwide. Izzak Walton called salmon the "King of Fish" in his classic "The Compleat Angler" in 1653...